The film “Birthday” has surpassed 1 million moviegoers in less than three weeks.

The film is about a family who lost their son in the Sewol Ferry disaster on April 16, 2014. It shows the story of how the rest of his family and friends meet again to celebrate him as his birthday approaches. Together, they cherish and reminisce about all of their memories with him.

After premiering on April 3, “Birthday” achieved a CGV Golden Egg score of 96% and received lots of positive reviews, allowing it to top box office charts in merely six days. Despite the release of many new movies, it has maintained its rank for two weeks and is still the only film released in April to surpass 1 million moviegoers.

The success of the film is not only due to positive reviews and word of mouth, but also due to its appeal to a wide audience. While some people were afraid that the movie would be too sad, viewers took to social media to share, “(It is) a story for all of us,” “A movie that makes me think of my family,” and “A film that both gives and receives comfort.” Schools, families, and local organizations arranged special events to watch the movie together, making the film all-the-more meaningful.

To show their appreciation for fans, director Lee Jong Eon and actors of the film personally wrote and signed thank you messages. 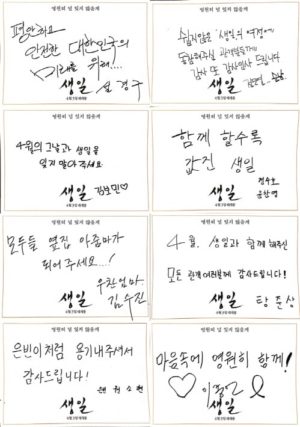 Sol Kyung Gu wrote, “For the fair and safe future of Korea,” while Jeon Do Yeon signed, “I thank and thank again viewers who joined us on the difficult journey of ‘Birthday.'”

Kim Bo Min wrote, “Please do not forget April 16, as well as ‘Birthday.'” Yoon Chan Young penned, “‘Birthday,’ which becomes more valuable as we come together,” while Kim Soo Jin wrote, “Everyone, please become the friendly next-door neighbor!” Tang Joon Sang signed, “Thank you to the viewers who joined us in ‘Birthday’ in April.” Kwon Sohyun wrote, “Thank you for being brave like Eun Bin.” Lastly, director Lee Jong Eon wrote, “Forever together in our hearts!”

In addition, South Korea’s Prime Minister Lee Nak Yeon took to social media to describe “Birthday” as “a creation that calmly yet delicately draws the everyday lives of families.” Another South Korean politician Yoo Eun Hye recommended the film, stating, “Although it is sad, this film showcases a warm meeting that will move your heart. I hope we will find the time to comfort one another.”

Check out a trailer for the film below.

Jeon Do Yeon
Sol Kyung Gu
birthday
How does this article make you feel?