On April 23, RM held a live broadcast to dive deep with fans into their new mini album “Map of the Soul: Persona.” It recently became their third release to hit No. 1 on the Billboard 200 and has also reached No. 1 in the United Kingdom and more, as well as set a new all-time sales record on Hanteo with over 2.1 million copies sold. The BTS leader has made it a tradition to chat with fans on V Live about his personal thoughts on their albums each time they make a comeback.

RM said that he’d been a “lyrics bot” for the group’s new mini album, and he wrote more lyrics for it than he ever had for a release before. “I wrote 80 to 90 percent of the lyrics, excluding Suga and J-Hope’s rap parts,” he explained. He shared that while working on his intro “Persona” had been a bit tiring, he’s glad that it came out well.

He went on to talk about the story of the concept of “Map of the Soul: Persona,” which is the first release in their new series. RM said, “To me, a ‘persona’ is a mask used in society. A mask can be a bad thing or a good thing, but it’s something you need when you’re living within in a society. My ‘persona’ is RM.” 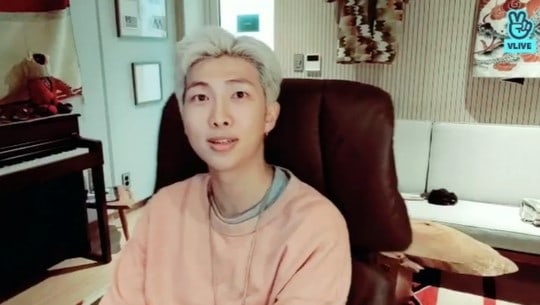 Another important part of “Persona” is BTS’s fans ARMY, said RM. “When I was trying to talk about the things I’ve gained, the masks, the shadows, and the good things, it was inevitable that I’d talk about ARMY. Other than the intro and the final song ‘Dionysus,’ everything seems like a dedication, a serenade, a confession to you. While working on the songs, I was able to write organically with a clear emotion. I was able to express my gratitude to the people who’ve made me who I am so far. I’m glad that it seems to have turned out well.”

RM shared that he’s noticed that lately there are many people who don’t listen to lyrics, but he aims to run counter to that. He said, “In this age when the melody and the vibe of a song are important, I’m someone who originally wanted to be a poet and writer, so I wanted to focus on the auditory texture and the beauty of language through the lyrics. Since they’re songs that I’m presenting to you, aren’t the lyrics really important? I felt pressured, but at the same time I was really happy while I was writing. I’ll be grateful if you focus on the lyrics when you listen to the album. I think this is an album where the lyrics are even more important than usual.”

He then went on to talk about each of the mini album’s seven tracks. He said about his intro “Persona,” “It was my first solo intro in five years, so I really felt so much pressure. I changed the lyrics a few times. ‘mono.’ had a chill and calm feeling, so I really wanted the more wild style that I’ve always liked. When we were filming the music video, I kept fixing it on set.”

RM revealed that he’d recorded the song five times, and that he ended up using his first recording. “If I perform it live one day, I want to do it in a really cool way,” he said. “After it came out, Tablo and Gaeko sent me messages on KakaoTalk to say that they were inspired by it and it was cool. I was really grateful, and I thought that it must have turned out well.”

Next up was the group’s title track “Boy With Luv,” which RM explained had used the English title originally but he had pushed for the current Korean title to be used, which is literally translated as “A Poem for Small Things.” At the same time, he also expressed the importance of having both titles together for the full meaning to be conveyed.

“It became really refreshing when we added Halsey’s voice,” he said. “I listened to it on a drive, and it sounded really great.” RM also shared that it was hard to create lyrics that would match with the melody, but he said he’s pleased with them now.

The third track “Mikrokosmos” also originally used only that title, but the members were vocal about adding the title in Korean (which is the Korean translation of the word microcosm or miniature universe). He shared that he was disappointed that they hadn’t ended up adding in a line where “Hey!” is shouted before “You got me.” He said, “I hope you’ll add in the ‘Hey!’ whenever you listen to it.” 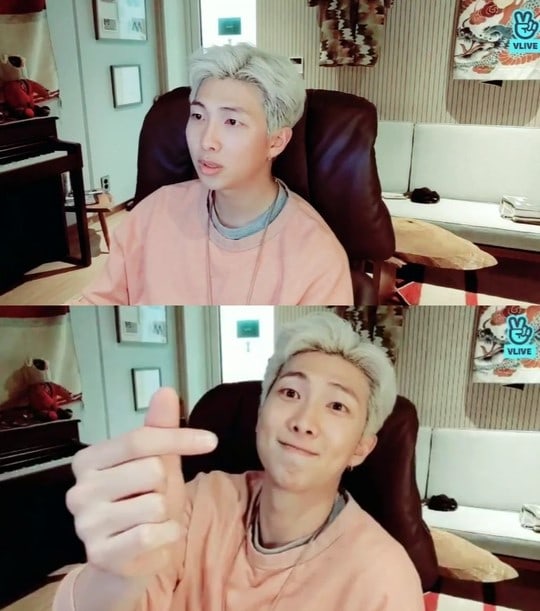 The next song is “Make It Right,” which was co-written by Ed Sheeran, and RM described it as another song that’s great to listen to while taking a drive. He explained, “As a songwriter, Ed Sheeran asked us to keep in the part that goes ‘I could make it better, I could hold you tighter.’ Now that it’s out, I think it was a good choice to do it in English.” RM also shared that while he worked on the lyrics, he imagined a lonely cowboy on a journey who wasn’t able to receive a welcome.

“The song almost became a vocal line unit track, but Ed Sheeran said that he hoped it would have all of us on it, with a feeling like ‘Spring Day,’ so we added the rap,” said RM.

The mini album’s fifth track “HOME” includes a lot of RM’s ad-libs throughout because RM felt it was a shame that the group’s songs usually have the vocal and rap parts separated. RM also described how all of the songs on the mini album work together, explaining that the order was on purpose.

“Jamais Vu” is the next track on the mini album, and it’s by the new unit of J-Hope, Jin, and Jungkook. “This is the saddest song on the album,” said RM. “I was so emotional when I heard the guide version. Since it’s a unit song it doesn’t include my voice, but since I wrote the lyrics I get sad whenever I hear it.” He explained that the theme for him had been a game, with the lyrics about something happening in the world of a game. He said, “I thought about a game in which if you die then you lose your belongings like your equipment and have to start over again. I tried to include the sense of loss and emptiness that I felt when playing a game.”

“The unit was such a new combination,” he said, and shared that he thought it had worked out well. “It was the song that the members liked the most before it came out. It’s a song that I really like.”

The last song on the mini album is “Dionysus,” and RM described that the lyrics for it were written last. He shared that had struggled during the writing process with the lyrics and wished that someone else would write them instead, but he gathered up the strength and wrote them. He also praised J-Hope for his work on the song and described Suga’s rap as art. “The vocalists also did so well,” he went on to say. “It’s a song that makes me think that we’ve all improved in skill.”

RM wrapped up the live broadcast by thanking fans for listening to the mini album, and also thanked ARMY in English after the group reached No. 8 on the Billboard Hot 100 for the first time.