On April 25, the cast of “The Fiery Priest” appeared on their own variety show with Kang Ho Dong and Yang Se Hyung as hosts!

Kang Ho Dong told Kim Nam Gil, “You met your best character. Do you watch the news?” Kim Nam Gil said he didn’t, but when Honey Lee called him out for lying, he admitted, “I actually do watch. I knew there would be this kind of reaction.”

Then Kim Nam Gil revealed that he ends up meeting Kang Ho Dong whenever one of his dramas becomes successful. He mentioned he appeared on Kang Ho Dong’s former show “Knee Drop Guru” a few hours before entering the military because of his popularity after “The Great Queen Seon Deok.” Honey Lee joked, “Then you should meet up with Kang Ho Dong often.” 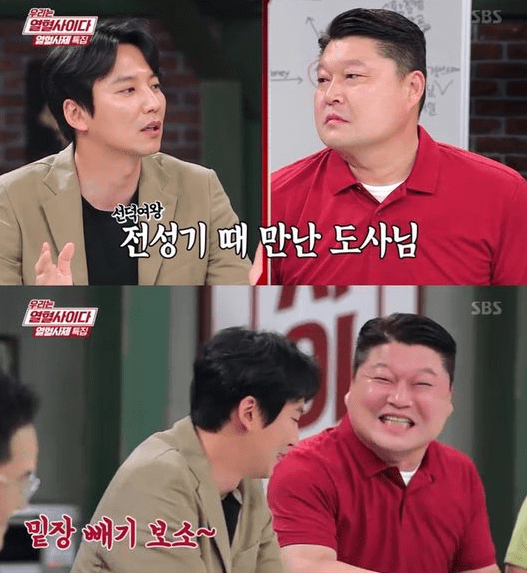 Director Lee Myung Woo chose Kim Nam Gil as the lead who had unexpected charms. He said, “I wrote the character with him in mind.” Honey Lee added, “I was worried that priests and believers would feel uncomfortable because the concept of a priest with anger management issues was burdensome. Kim Nam Gil played a good role as, not just a priest who curses, but a priest with a passion for the world.”

Kim Nam Gil said, “I thought priests would feel uncomfortable, but when I asked a priest, he said, ‘It’s an anger for justice, and it’s a reasonable anger, so there’s no problem at all,’ so I was very grateful.” 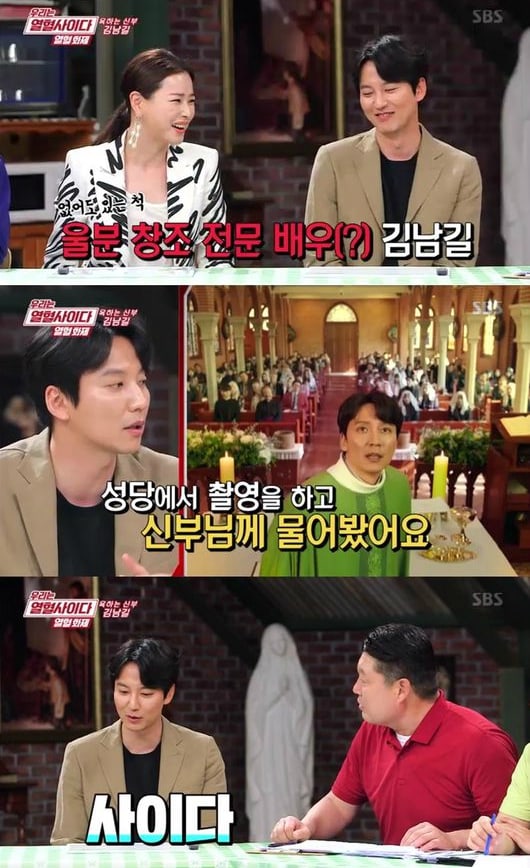 Honey Lee also praised Kim Hyung Muk, saying, “He’s actually a great singer. Even when we were filming a scene where he was scolding [me], he started singing.” The actor wasn’t afraid to show off his quirky yet skillful dance moves with a lollipop in his mouth.

Of course, they couldn’t leave out the action scenes. Lee Myung Woo said, “[Kim Nam Gil] uses a body double, but he mostly does all the [action scenes]. He worked so hard that he broke his ribs.” The other actors commented that he does the action scenes so passionately that they worry about him.

Kim Sung Kyun and Honey Lee commented, “Kim Nam GIl has long arms and legs, so the action scenes look cool. Also, he knows he looks cool.” Kim Nam Gil responded, “Ever since I was little, I learned the fundamentals of taekwondo.” He even displayed an effortless 130 degree spinning kick, awing everyone on the show.

Next, the cast discussed the scene where Kim Nam Gil and Honey Lee reenacted “Mr. Sunshine.” Lee Myung Woo said, “I heard they filmed [that scene] for two days, but we filmed it in two hours,” making everyone laugh. He also talked about the “Matrix” parody and commented, “It took two months. We wanted to film it well because it was the most Father Kim Hae Il could do to get revenge. There was difficulty in that they had to slow down on their own, and Kim Sung Kyun brought life to the scene where he was beaten by doing his best to act until he disappeared from the screen.” 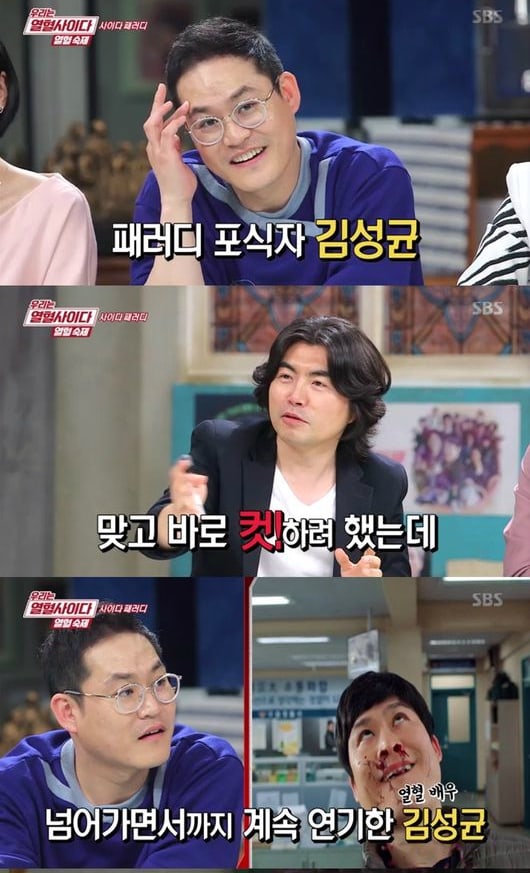 Honey Lee added, “When actors see a parody script, they wonder how they can pull it off, and I realized that it happens when you have the amazing acting skills to build upon.” The director agreed, saying, “The important thing in parody scenes is the teamwork between actors and the director, and I had a lot of fun while filming them.”

Honey Lee shared that she loved acting with Kim Hyung Muk the most, making him smile widely with pride. Then she made everyone laugh when she revealed it was because her face looks smaller due to his big face and added that she hates standing next to Kim Nam Gil.

Baek Ji Won commented, “I heard that I resemble Hollywood actress Sandra Oh a lot as well as DJ DOC’s Lee Ha Neul,” and everyone laughed at her frank confession.

Also, Kim Sung Kyun exposed Go Joon’s tendency to boast about things. Kim Sung Kyun said, “The funny thing is that he brags about himself quietly. One day, he came and said, ‘I suddenly have to film a kickboxing scene. What would I have done if I didn’t know kickboxing?'”

Honey Lee and Kim Nam Gil admitted they love to imitate Go Joon’s breathing, and Go Joon said, “Let me explain. I learned muay thai, and I have to breathe in a certain way.” Honey Lee kept teasing him about that and Kim Nam Gil jokingly grabbed her collar and said, “Don’t make him do it!” 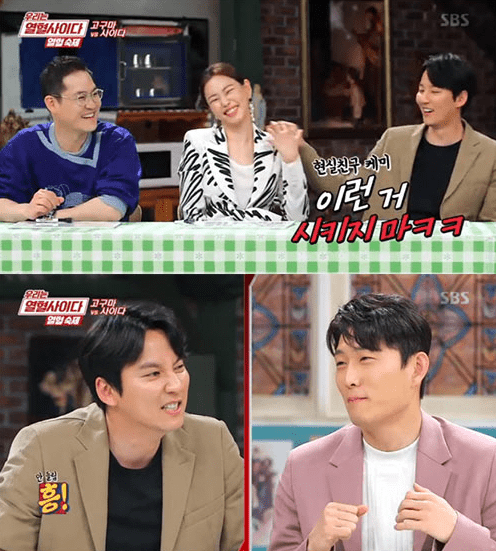 Watch the finale episodes of the drama below if you haven’t already!