Watch: IZ*ONE’s Jang Won Young Showcases Her English Skills And Talks About Her Dreams Before Becoming An Idol

IZ*ONE’s Jang Won Young spoke about her academics and childhood dreams on JTBC’s “Ask Us Anything.”

On the May 4 episode, IZ*ONE appeared as guests, and the cast tried their best to match each member to her name based on a hint.

When the cast heard the hint, “The smartie who got a perfect score in Language Arts, English, and Math,” Kim Young Chul asked Kim Chae Won and Jang Won Young to introduce themselves in English in order to test their skills. Kim Chae Won hilariously responded in Japanese, and she explained, “Sorry. We have many Japanese members, so it’s a habit.” 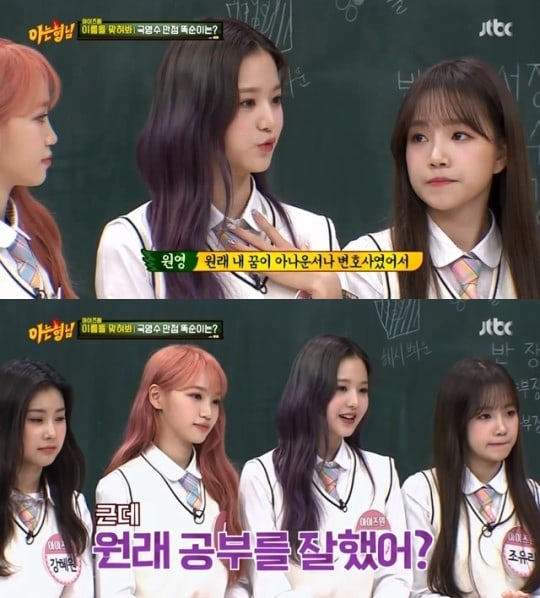 “I recently took the qualification exam for middle school,” explained Jang Won Young. “I checked the provisional marks, and I got a perfect score in Language arts, English, and Math.”

When Kim Heechul asked if she always excelled academically, she replied, “My dream was originally to become an announcer or a lawyer so I studied really hard.” About her excellent English pronunciation, she explained, “I attended an English-speaking kindergarten when I was young,” which the idol previously spoke about during IZ*ONE’s appearance on “Problematic Men.”

Kang Ho Dong then commented that it must be difficult to juggle IZ*ONE promotions and her academics and wondered if she ever felt regretful. “I felt so upset at first,” said Jang Won Young. “But as I was promoting with IZ*ONE, I realized there are more things I gain as IZ*ONE. When would I have gotten to meet the ‘Ask Us Anything’ members [if I hadn’t debuted]? I really wanted to come here.”

Check out Jang Won Young’s English skills in the clip below!

Watch an episode of “Ask Us Anything” below:

Jang Won Young
Knowing Bros
IZ*ONE
How does this article make you feel?