“Absolute Boyfriend” is about Uhm Da Da (played by Minah), whose heart is closed off due to wounds from love, and the romance that occurs when she meets Zero-Nine (played by Yeo Jin Goo), a humanoid robot built to be the perfect boyfriend.

Minah will be playing the “analog” personality Uhm Da Da, a talented special effects makeup artist who strongly leads her team instead of her late father, and Hong Jong Hyun will be playing the role of Ma Wang Joon, South Korea’s top star who seems prickly on the outside but is actually a soft person on the inside.

In the new stills, Minah and Hong Jong Hyun have been spotted on a “sweet secret date” as the two are shown comfortably enjoying a space of their own. The pair lean into each other on the sofa and simply share time together. Uhm Da Da pinches Ma Wang Joon’s cheeks lovingly, and Ma Wang Joon casually lays next to her while reading his script as if he’s used to it, and the lovely couple also share a back hug. Viewers are curious to discover what secrets they’re hiding and what relationship the two characters who are sharing real chemistry will have. 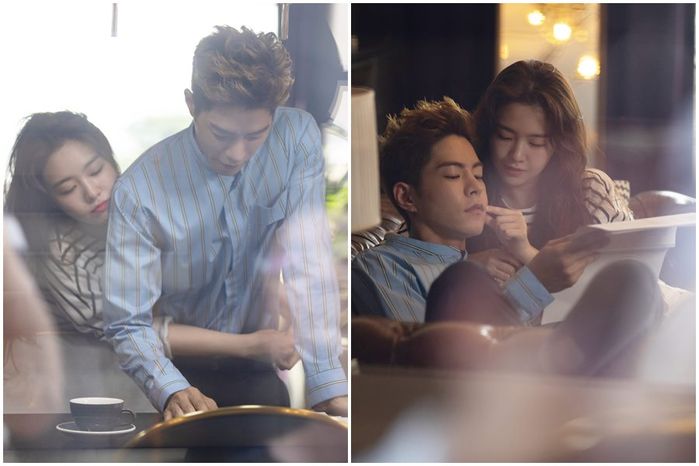 Minah and Hong Jong Hyun filmed the scene in the city of Paju in Gyeonggi province. The two entered the set with laughter and prepared for rehearsal by sharing their concerns about filming. In particular, they analyzed their characters’ actions, shared their characters’ emotions, and completely immersed themselves into their roles.

During the actual filming, Minah and Hong Jong Hyun discussed in detail with the director about the scene so that they could create a perfect shot of their characters sharing a comfortable and beautiful memory together. With Minah’s thoughtful consideration and Hong Jong Hyun’s smile, the sweet “secretive home date scene” was completed.

The production staff shared, “With six days till the first broadcast, ‘Absolute Boyfriend’ is an unpredictable ‘spectacle love story’ that doesn’t seem out of the ordinary but actually has many hidden secrets. Please look forward to finding out the story behind the strange atmosphere between Korea’s big star and the manager of the special effects makeup team.”

“Absolute Boyfriend” will premiere on May 15 and will be available on Viki! Watch the trailer below!