On May 21, Good Data Corporation released their weekly ratings of the most buzzworthy dramas and cast members.

The results are from the company’s analysis of 28 dramas that aired or are scheduled to air from May 13 to May 19 in the areas of online articles, blog posts, community forums, social media, and views on video clips.

tvN’s “Her Private Life” topped the list of most buzzworthy dramas for the third consecutive week. Along with the drama, Kim Jae Wook and Park Min Young also kept their positions at No. 1 and No. 2, respectively, on the buzzworthy actors list for two weeks in a row.

In second place was SBS’s new Wednesday-Thursday drama “Absolute Boyfriend.” Its cast members Girl’s Day’s Minah and Yeo Jin Goo placed No. 3 and No. 4, respectively, on the buzzworthy actors list.

OCN’s “Voice 3” followed in third place with its male lead Lee Jin Wook placing No. 9 on the list of most buzzzworthy actors.

Keeping its fourth place spot from last week was SBS’s “Nokdu Flower,” with two of its male leads Yoon Shi Yoon and Jo Jung Suk entering the buzzworthy actors list at No. 7 and No. 8, respectively. 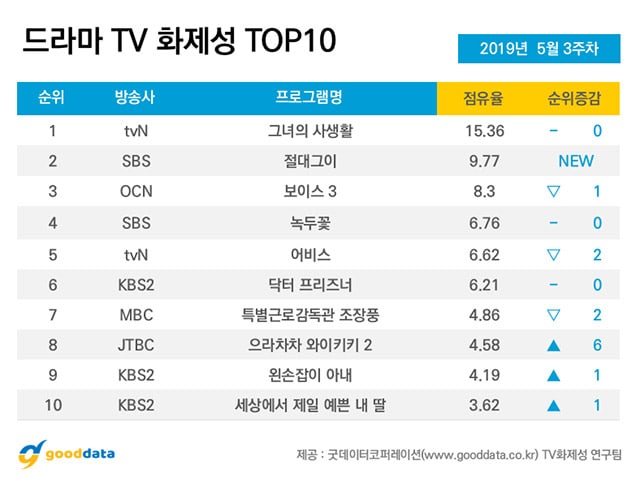 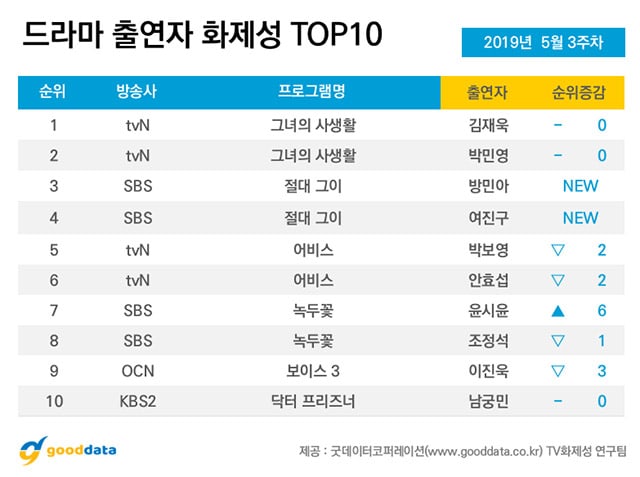