Super Junior’s Kyuhyun, who recently finished his mandatory national service, revealed the gift he received from Yoo Hee Yeol before his enlistment and passed it on to someone else.

The singer returned to “Yoo Hee Yeol’s Sketchbook” for its May 24 broadcast, his first music show since his return.

“Sketchbook” was also Kyuhyun’s final show before his enlistment, and Yoo Hee Yeol said, “I’m not sure if it was because you thought it was your last time, but you did all kinds of things on the show that day. I really felt how much you cared about ‘Sketchbook,’ and I was so thankful that I gave you a gift. It was a set of 16 photos of myself.”

Kyuhyun pulled the photo set out of his pocket and said, “When I first received this, I thought, ‘Why is he doing this to me?’ but I cherished it and brought it back after two years.”

Yoo Hee Yeol joked, “You brought it back to throw it away, didn’t you?” and Kyuhyun explained, “Rather than throwing it away, I thought maybe there would be someone here who’s about to go to the military [whom I could give it to].”

Yoo Hee Yeol asked the crowd if anyone was getting ready to enlist, and called an audience member whose enlistment date was the next week to come up on stage to take the photos. 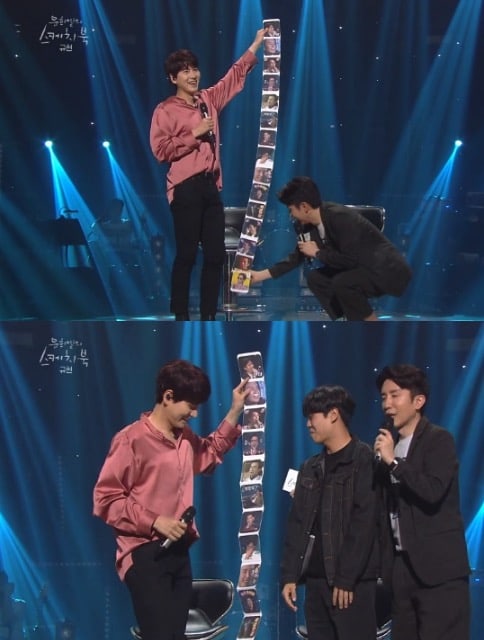 Kyuhyun also explained a recent comment he had made in which he said he had gotten so much better at singing. He said, “I wasn’t trying to say that I had vastly improved my technique or anything. What I meant was that after resting [my voice] for a long time, it’s in a very good state. Before, I had gotten vocal fold nodules and strained my voice at times.”

When asked which singers made him really want to sing while he was away, Kyuhyun named Ben and Paul Kim and sang an excerpt from Ben’s “180 Degrees.”