On the May 30 broadcast, the singer shared his thoughts on dating and talked about his fellow members.

When asked about the biggest change in his life after being discharged from the military, Kyuhyun replied, “I think the best thing is that I can sleep in or take naps without worrying about what day it is. I think it’s really nice not having to live like an office worker.”

He also shared reactions from Super Junior members. “The members cheered me on a lot by saying that we’ll be able to unite and that we should work hard once again,” said Kyuhyun. He revealed that Choi Siwon has been the most welcoming member and calls him often. He jokingly added, “I held a fan meeting and Ryeowook, Eunhyuk, and Donghae were the only ones who came to the fan meeting. I’m going to remember this. I have a really good memory, so I’m not going to forget this for about 10 years. I was shocked by everyone except for those three members.” 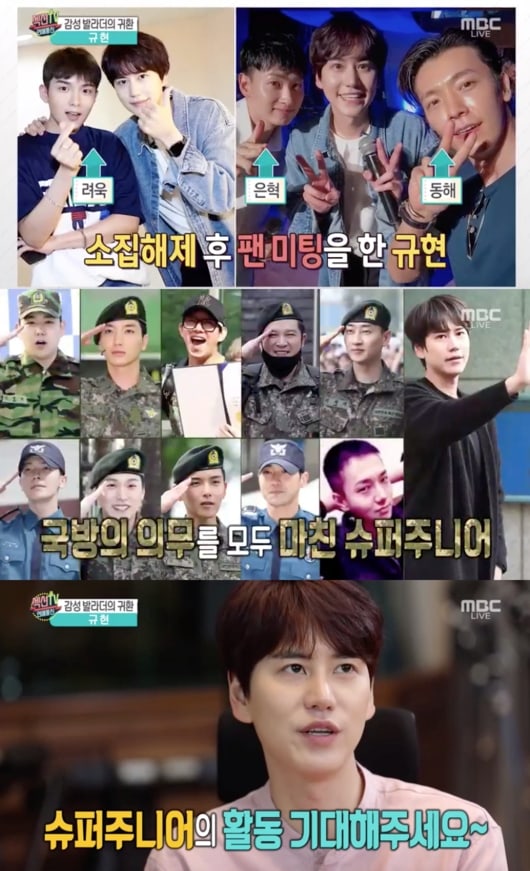 Kyuhyun then discussed the topic of dating. The singer was recently involved in dating rumors with a woman in a special clip of his MV. In response to rumors, he posted on Instagram that the woman in question was a model who he never even ran into while filming.

During the interview, he explained what happened in the video. He said, “I line up all of the things that I like and then a photo of a woman appears at the end, so people speculated that I was revealing a photo of my girlfriend. I had never seen her before and don’t even know who she is. It was so unfair. If I were really dating and did that, I wouldn’t even feel like it was unfair, but I felt sad after.”

“I want to date,” continued Kyuhyun. “I think I’ve turned into a complete idiot about dating. I really miss dating and can’t even remember what it was like. I can say this confidently — it’s been a really long time since I’ve dated. These days, what I want to do the most is hold hands.” He laughed as he said, “I just want to fall in love because I’m singing love songs but can’t remember the emotions that come with it like sadness.”

About his ideal type, Kyuhyun replied that he likes women who look pure and said, “I think a woman’s charms increase exponentially when she ties her hair up.” When asked which celebrity is the closest to his ideal type, he replied, “BLACKPINK’s Jisoo.”

Kyuhyun recently made a solo comeback with “Aewol-ri.”

Super Junior
Kyuhyun
Section TV
How does this article make you feel?