In celebration of the launch of this year’s BTS Festa, ARMY has taken over Twitter with an outpouring of love for BTS!

On June 3 at midnight KST, BTS officially kicked off their 2019 Festa—their annual celebration of the anniversary of their debut in June 2013. In keeping with their yearly tradition, the group will be sharing lots of new content and gifts for their fans in the days leading up to their anniversary on June 13.

This year’s Festa began with the first set of BTS’s new “family portraits” for 2019, and shortly after they were released, BTS-related hashtags took over the list of Twitter’s top worldwide trends. As of 2:16 a.m. KST, the top three worldwide trends on the social media platform were still #2019BTSFESTA, #ToMyBelovedV (a hashtag celebrating the day that V was first revealed as a member of BTS), and #WelcomeToFESTA.

“Agust D” was also trending worldwide at No. 8, with many fans excited to see Suga rocking his signature look from his music video for “Give It to Me” in BTS’s 2019 family portrait photos. 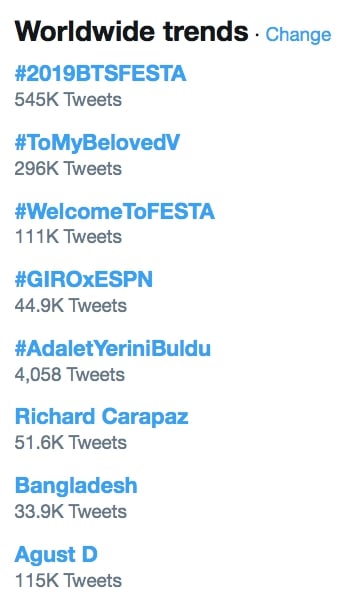 You can check out BTS’s creative new family portraits here, and you can mark your calendars for what’s coming up next by checking out the timeline for their 2019 BTS Festa here!