When a love triangle is thrown down in a K-drama, one must always pick a side. It’s a golden rule! Or perhaps we should say it was a golden rule, because now “Absolute Boyfriend” is here, and it’s throwing the rule book out the window.

One minute we’re drawn to Zero-Nine (Yeo Jin Goo), the perfect robot boyfriend. The next minute we’re swayed by Ma Wang Joon (Hong Jong Hyun), the ex with a wounded heart. Both these male leads have so much to offer in such completely different ways. We have no idea how Uhm Da Da (Girl’s Day’s Minah) could possibly choose between them! Here are six moments that swayed us from one side of the triangle to the other.

1. When Zero-Nine keeps beating Wang Joon to the rescue 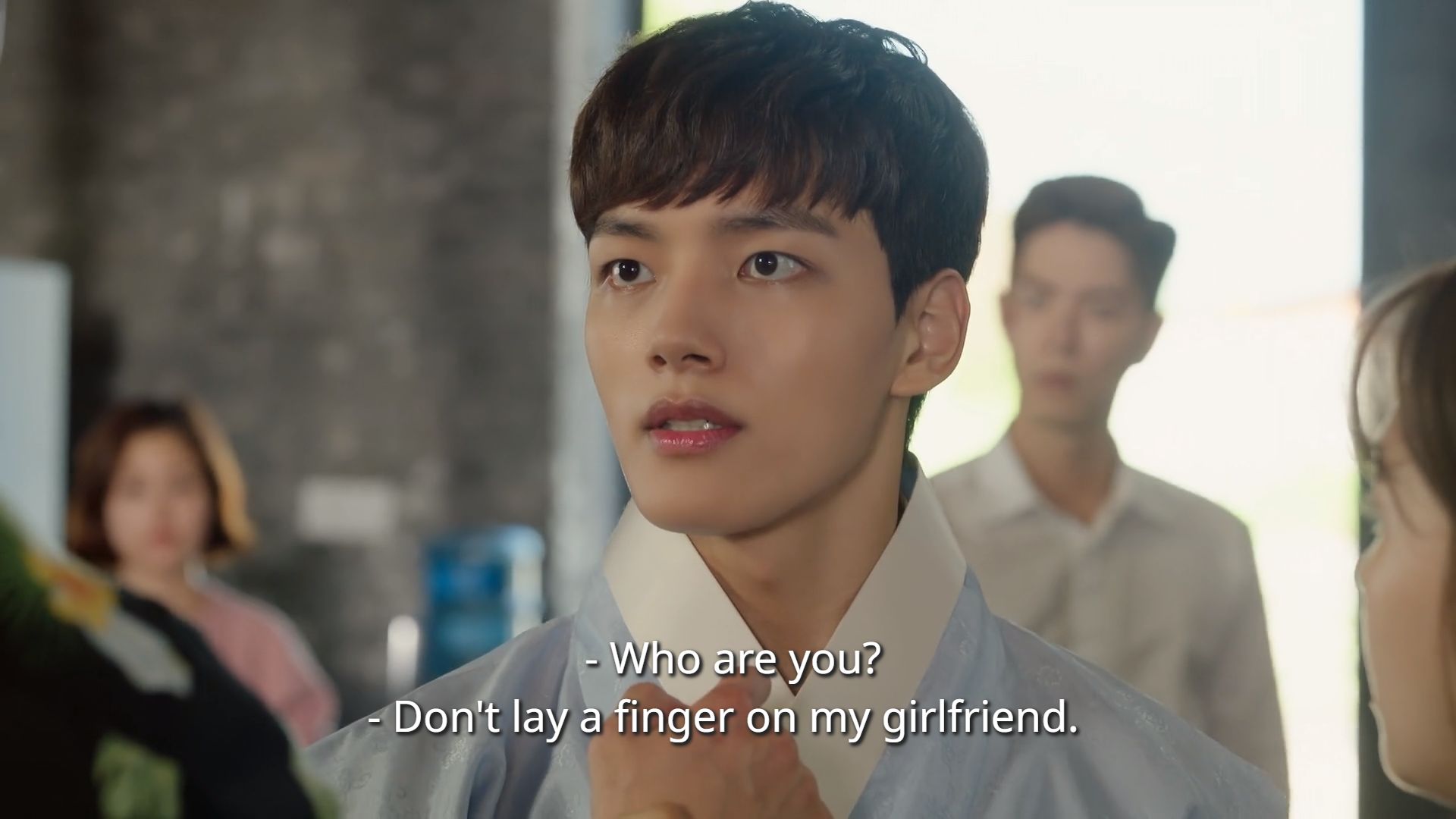 In Episode five, Da Da is having a hard time on the set of the drama where she works as a special effects artist because she’s being harassed by an actor named Hwa Ni (Choi Joo Won). Wang Joon, the drama’s lead, is about to intervene when up pops Zero-Nine. He strides ahead of Wang Joon and throws Hwa Ni across the room with a flick of the wrist. Later, it starts to rain, and Wang Joon heads out looking for Da Da, umbrella in hand. But Zero-Nine beats him to the punch again, swooping up in a classic male lead fashion to hold an umbrella over Da Da’s head. 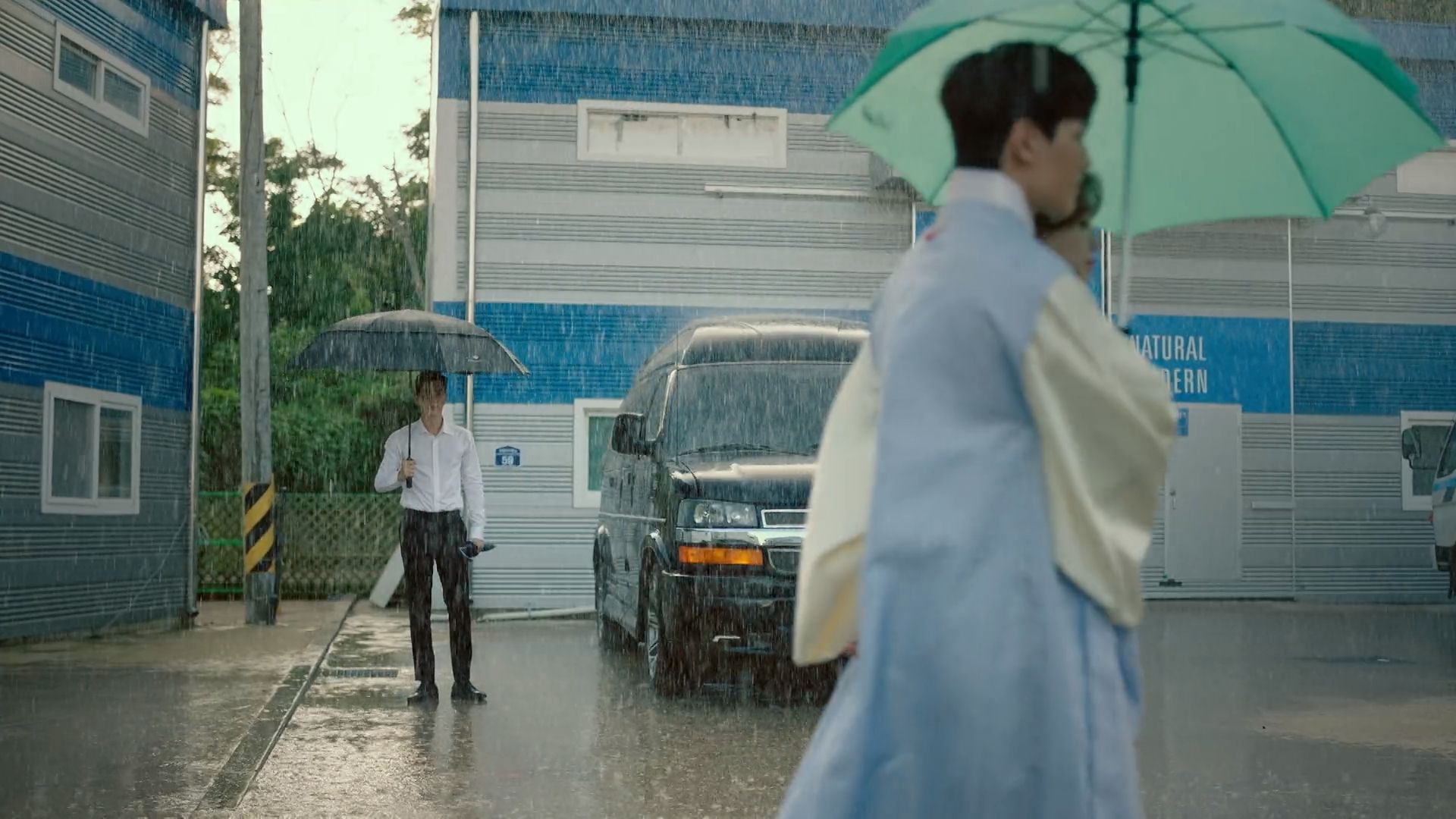 Even though Wang Joon broke up with Da Da the day before, it’s easy to see that a lot of feelings still linger from their seven-year relationship. He proves how much he still cares when he gives up the lead role to Hwa Ni, aiming to mollify him and stop him from chasing after Da Da. And no matter what the reason for their breakup, anyone would be hurt to see that their ex had seemingly moved on after just one day. Zero-Nine, meanwhile, is so purely focused on Da Da’s needs alone that he thinks of no one else and waits for her patiently with an umbrella, even after she has yelled at and rejected him. These puppies are both breaking our hearts!

2. When Da Da tells Wang Joon that Zero-Nine is her boyfriend 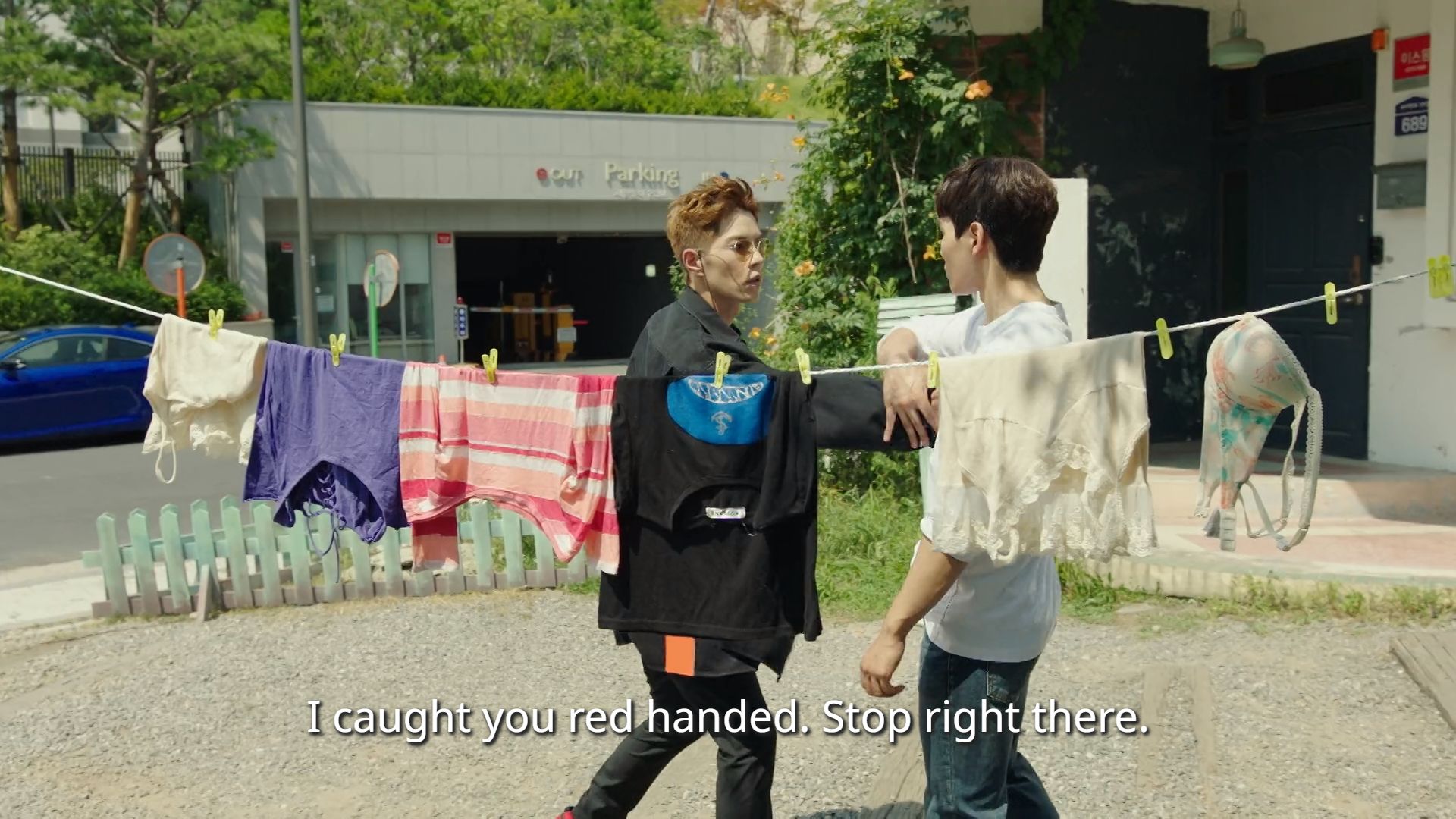 The end of Episode six is pivotal for our perception of Wang Joon, as we realize the real reason he ended things with Da Da is that she was being threatened by his stalker. Suddenly, his coldness makes complete sense. And it seems he’s regretting it, because he drives to Da Da’s place, where he runs into Zero-Nine taking in Da Da’s laundry. Wang Joon mistakes Zero-Nine for a panty thief and confronts him, only to get his wrists pinned behind his back with Da Da’s bra. Shocked to find Wang Joon there, Da Da defensively responds to his angry questions by calling Zero-Nine her boyfriend. 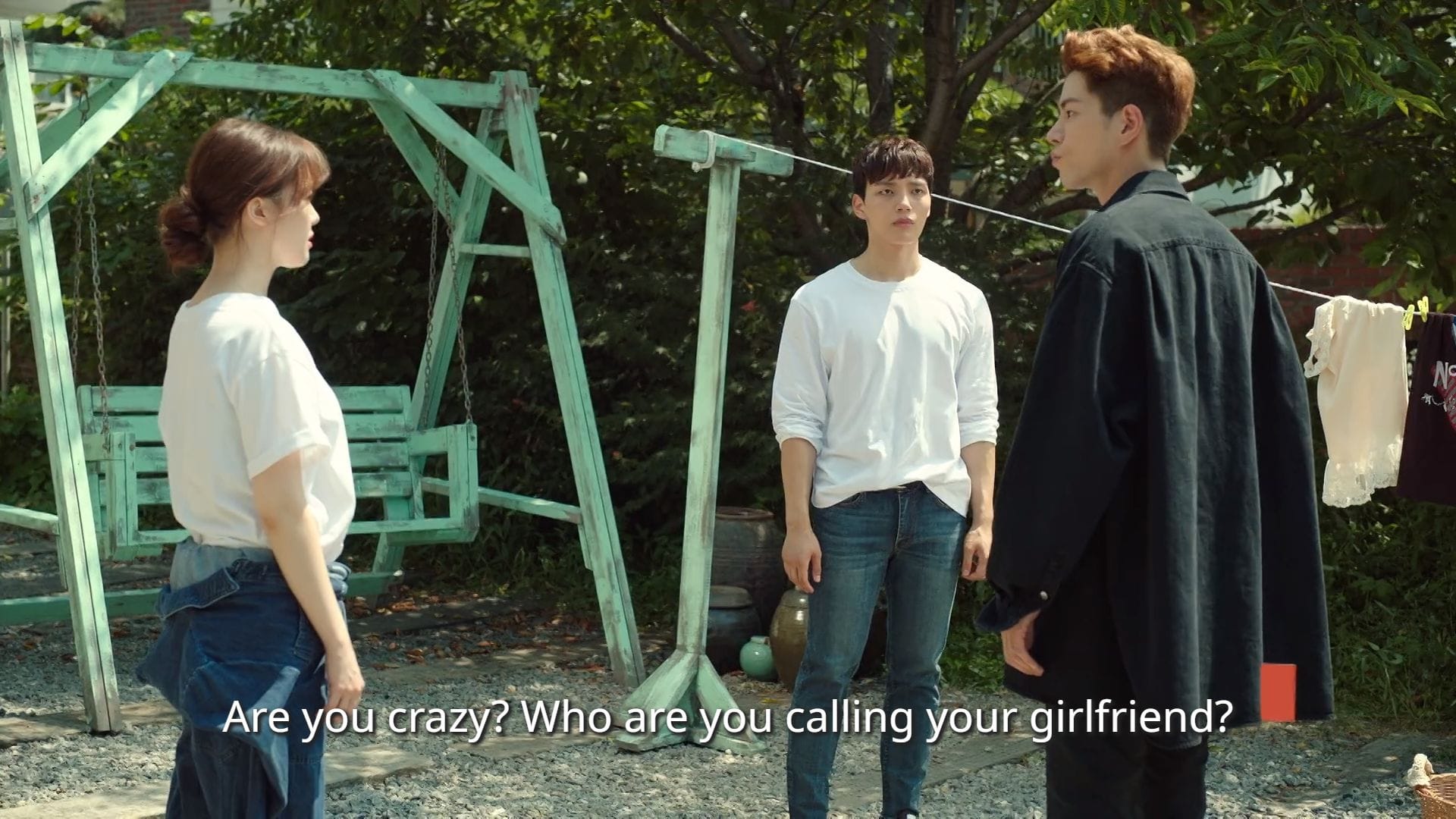 In this scene, we run the gamut from feeling bad for Wang Joon, rolling our eyes at his “Do you know who I am?” posturing in front of Zero-Nine and feeling bad for him again when Da Da confirms his worst fear. Through it all, Zero-Nine remains calm on the surface, but we can sense the threat he feels from this intruder who seems so possessive over his ‘girlfriend.’ Somehow, these two very different men (beings?) seem equally in need of protection.

3. When the free hug goes to the wrong person 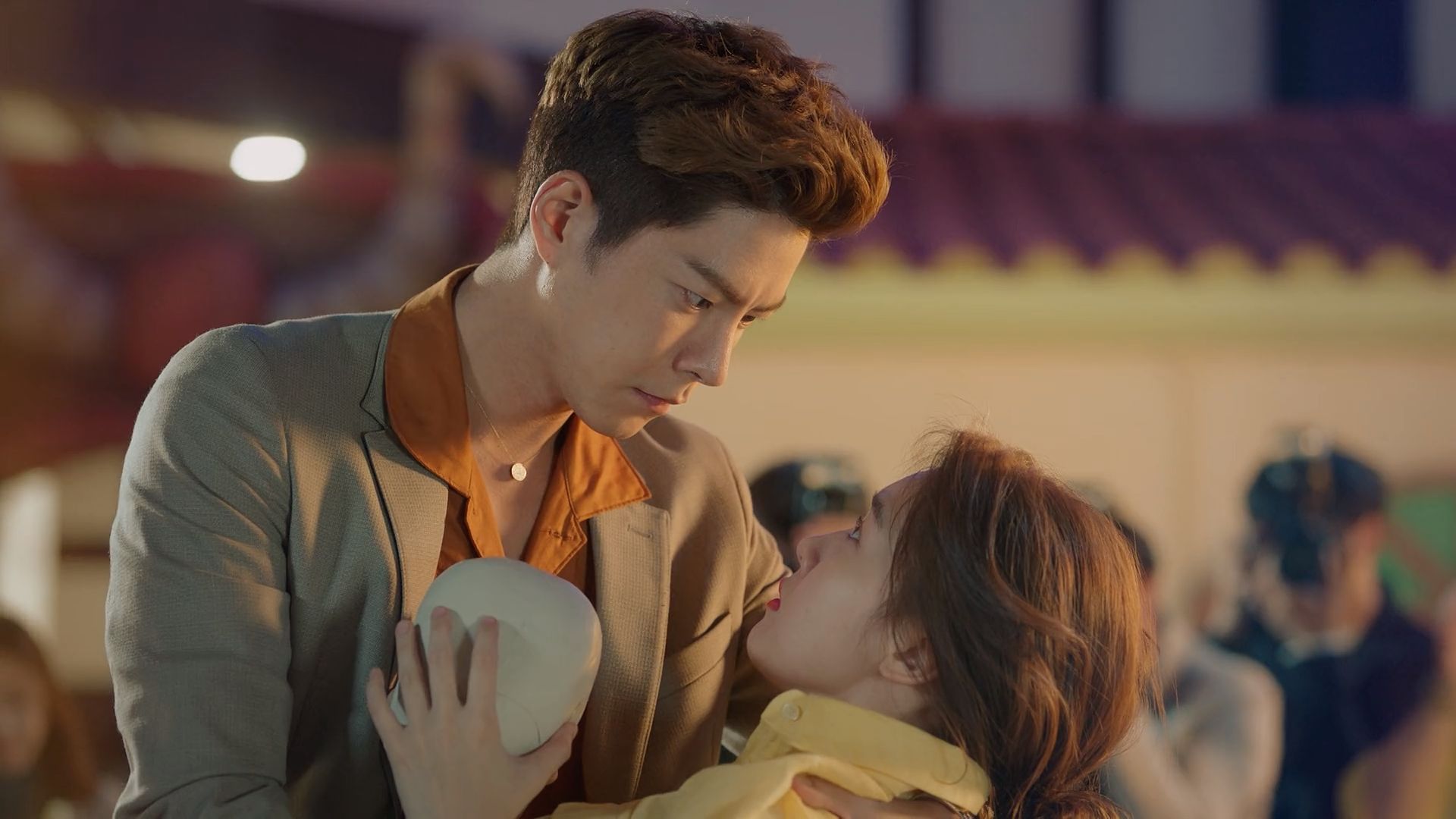 When Da Da is offered a temp gig at an amusement park in Episode nine, she gladly accepts and, of course, Zero-Nine tags along. Little do they know, Wang Joon is also there for a free hug event. And, of course, as Da Da fumbles around for some props, she falls straight into Wang Joon’s arms. It’s a charged moment, interrupted by a distraught Zero-Nine. As the flustered MC pushes Da Da and Wang Joon to have the day’s first free hug, Zero-Nine decides he must take action and pulls Wang Joon into his arms instead. 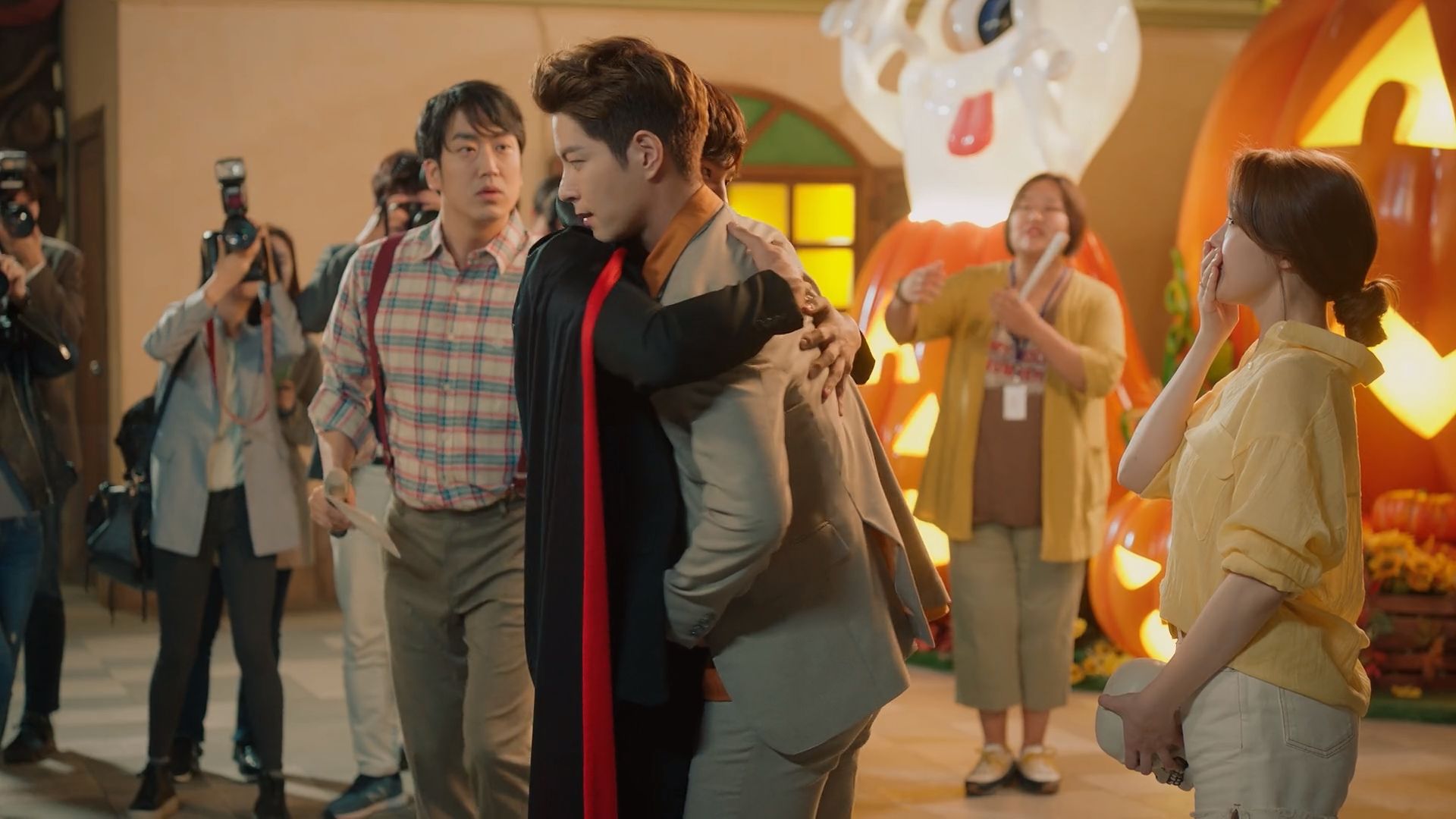 For Wang Joon, it must seem as if fate is throwing him and Da Da back together. Despite the fact that he’s standing in front of a crowd of fans, he can’t help but be entranced by Da Da’s presence, and we feel the chemistry sizzling between them. We’re waiting for that hug, but then we see the scene through the eyes of Zero-Nine, and it hurts to see him on the outside after everything he’s done for Da Da lately. We can’t blame him for cutting the moment short in the cutest way possible.

4. When Wang Joon sadly watches from the shadows 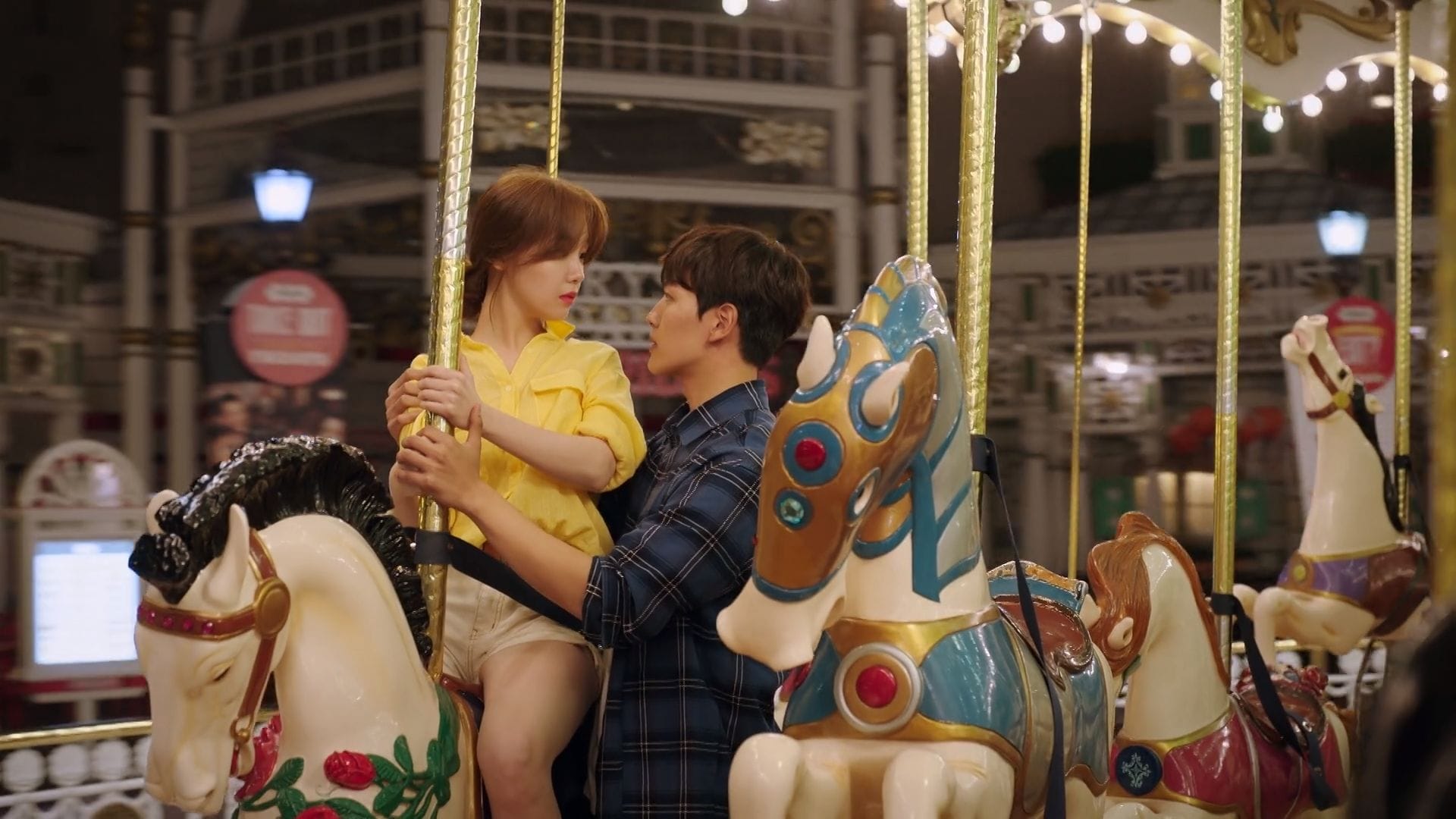 That amusement park holds a lot of memories for Da Da and Wang Joon. It’s the place where he first gave her a couple ring, with a promise to propose once he wins Best Male Lead. The moment never came, so it’s hard for Da Da and Wang Joon both to revisit their past haunts. Zero-Nine, being Zero-Nine, tries everything to cheer Da Da up, even riding a parade float and drawing magical hearts in the air. His barrage of romance culminates in a carousel ride, where the two can’t help but stare into each other’s eyes. Wang Joon has come looking for Da Da, but he can only watch from a distance, shaking his head in regret. 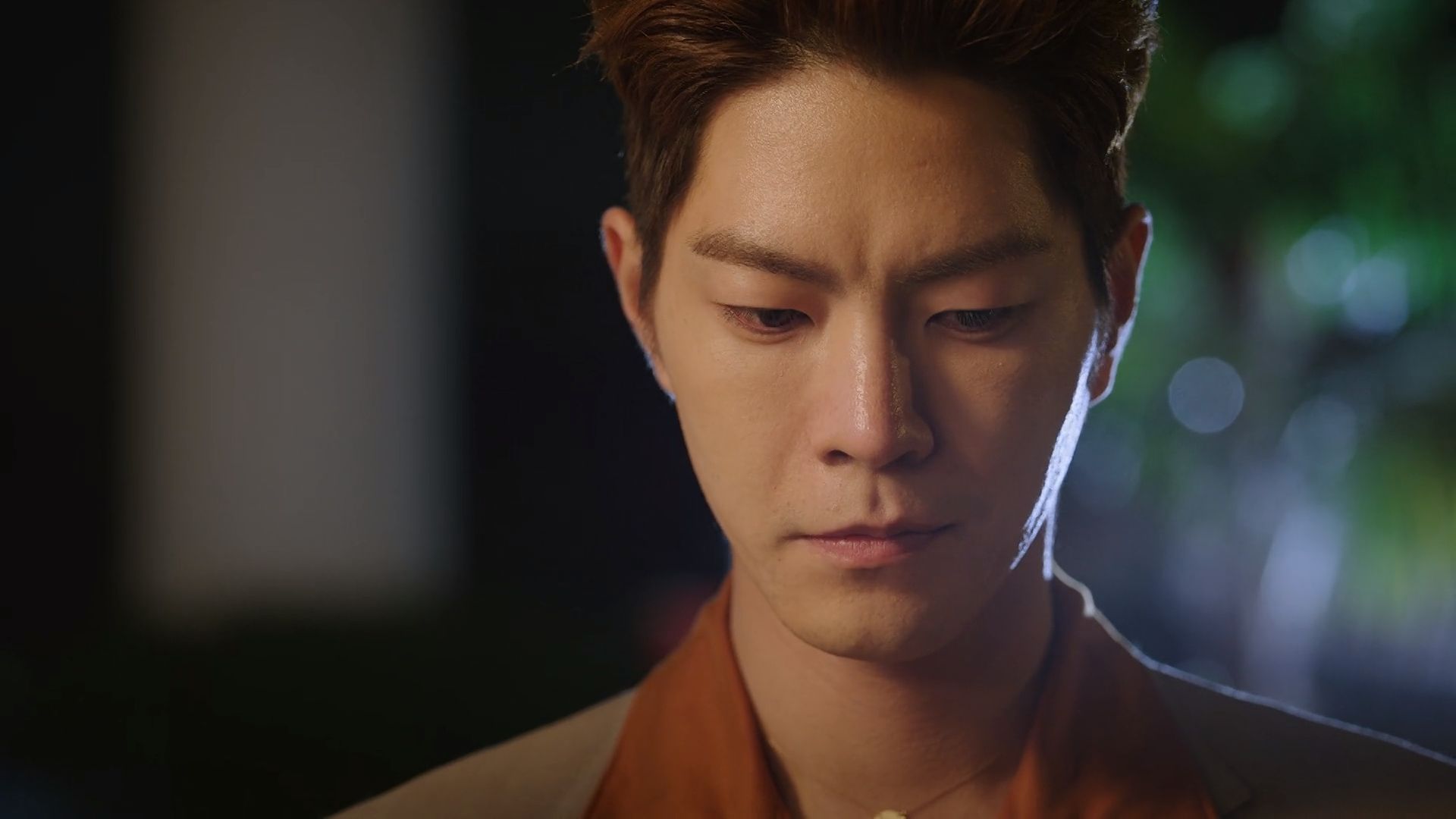 Here, Zero-Nine gives Da Da a gift as precious as any couple ring. He takes the sting out of her saddest memories, making new ones with her that lighten her heart in a time of need. And he does it with true flourish, creating a moment that even Da Da says is straight out of a K-drama (lol). Wang Joon, who spent their entire relationship hiding Da Da away, could never compete with that. Our hearts go out to him as he quietly accepts that fact, but at the same time, we’re delighted for Zero-Nine that he fulfilled his greatest wish: making his girlfriend happy. 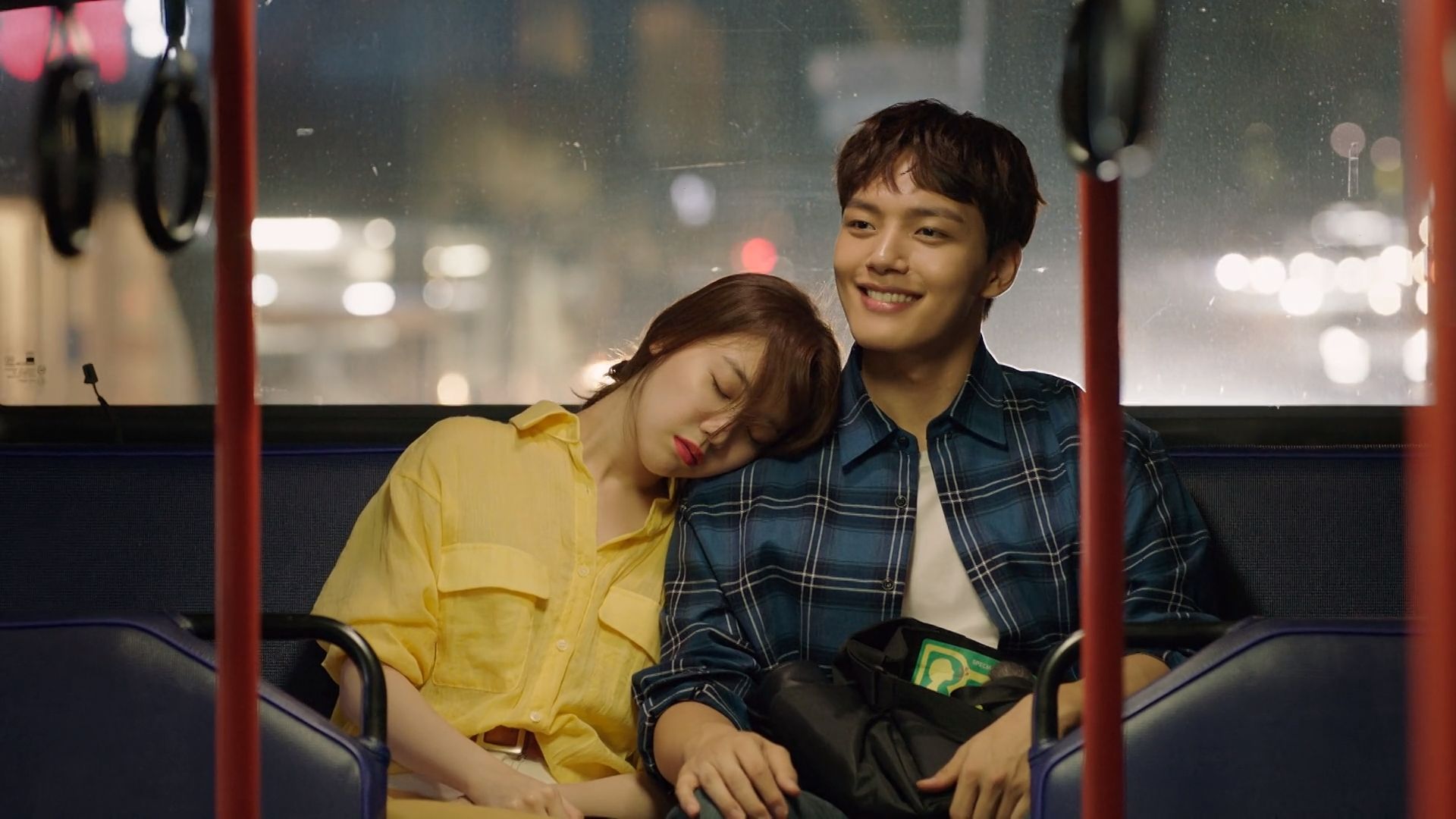 On the bus ride home in Episode 10, Da Da is exhausted and falls asleep on Zero-Nine’s shoulder. Our favorite robot breaks into the biggest grin. He can barely contain his excitement at his chance to be her literal shoulder to lean on. At that moment, Wang Joon is at home alone, gazing at the engagement ring we now learn he was planning to give Da Da. We get a flashback to the night of the awards show when he was scared away from proposing by a creepy message sent from his stalker. 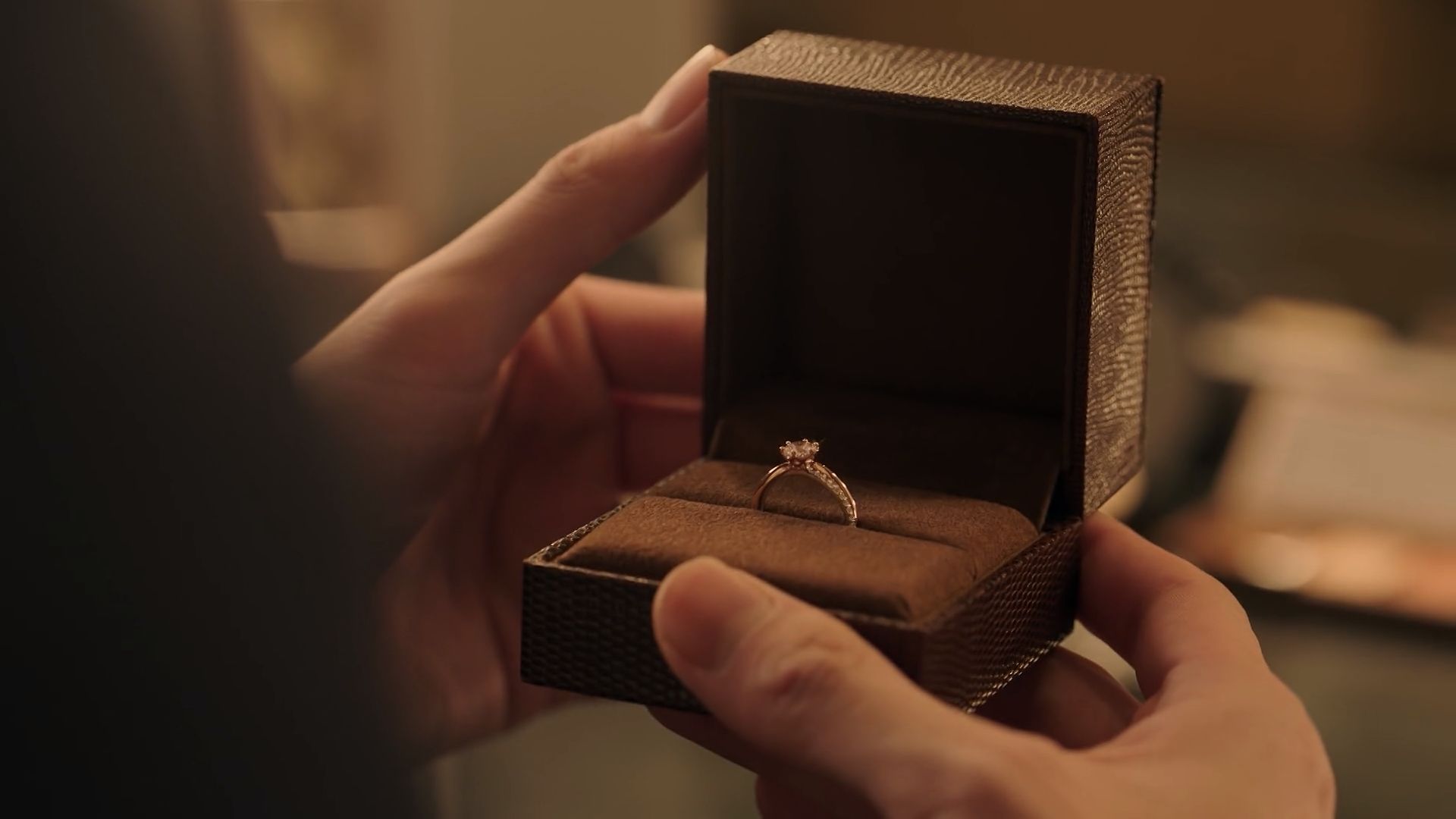 Again, Da Da and Zero-Nine get a classically romantic K-drama moment which he delights in. It’s so endearing to see how he responds to her even when she can’t see him, making us viewers question whether computer programming is really all that different from real, human emotion. At the same time, we learn that Wang Joon’s affection for Da Da goes deeper than we realized. As lovely as these perfect romantic moments might be, it’s hard to argue with seven years of real, imperfect relationship history.

6. When Wang Joon leaves the restaurant while Zero-Nine waits at the dock 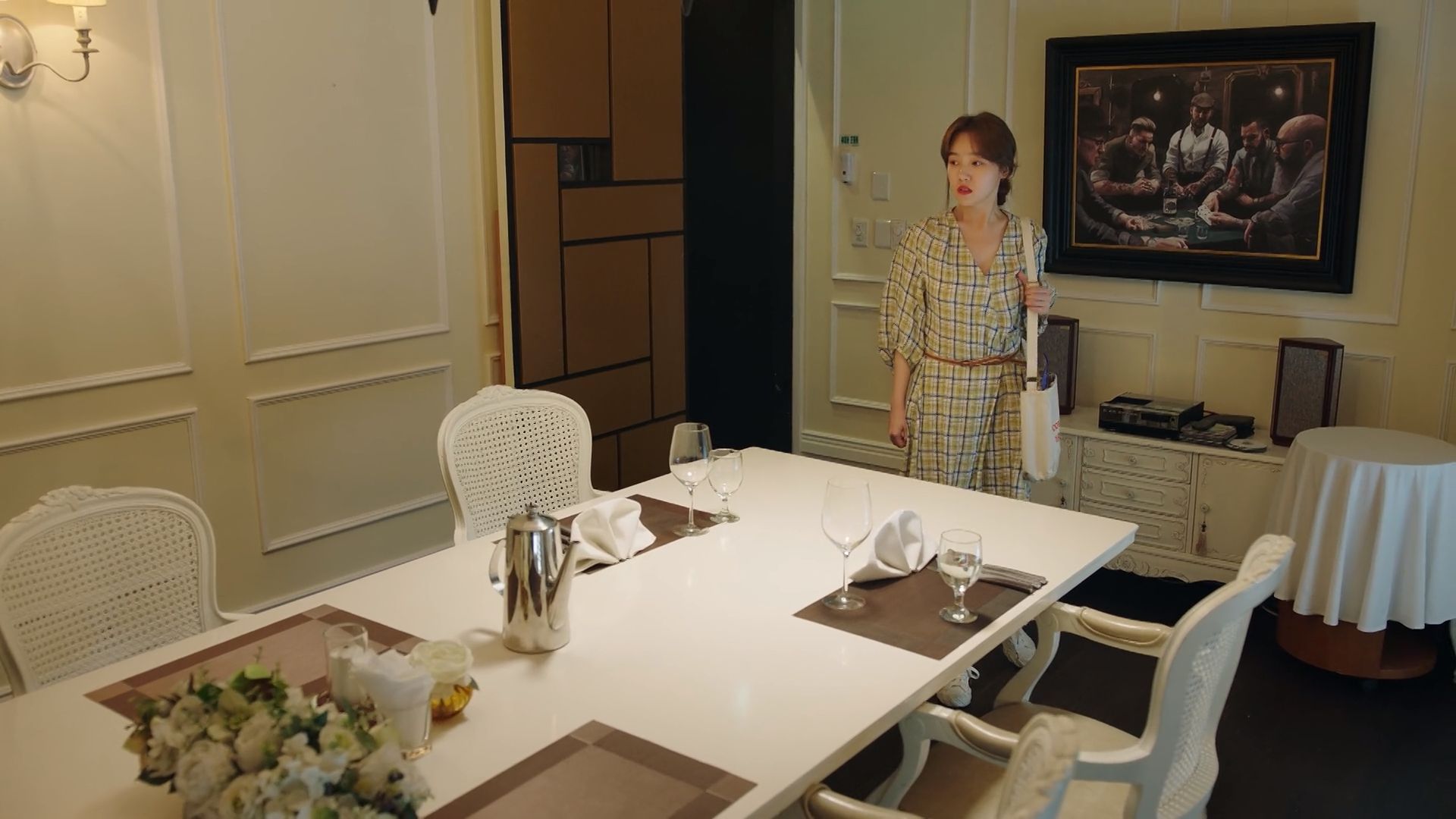 In Episode 11, Da Da is double-booked for a date. Wang Joon wants her to meet him at their old favorite restaurant so he can tell her the truth about his stalker and try to win her back. Zero-Nine wants her to join him on a river cruise he won tickets for. She initially agrees to go with Zero-Nine but runs to Wang Joon at the last minute, asking Zero-Nine to wait for her. But Wang Joon is called away with news that his manager Yeo Woong (Ha Jae Sook) has gotten into an accident. Da Da arrives at an empty restaurant then trudges home to an empty house, belatedly realizing that Zero-Nine is still waiting for her by the ferry and will wait as long as it takes, even when it makes no sense to do so. 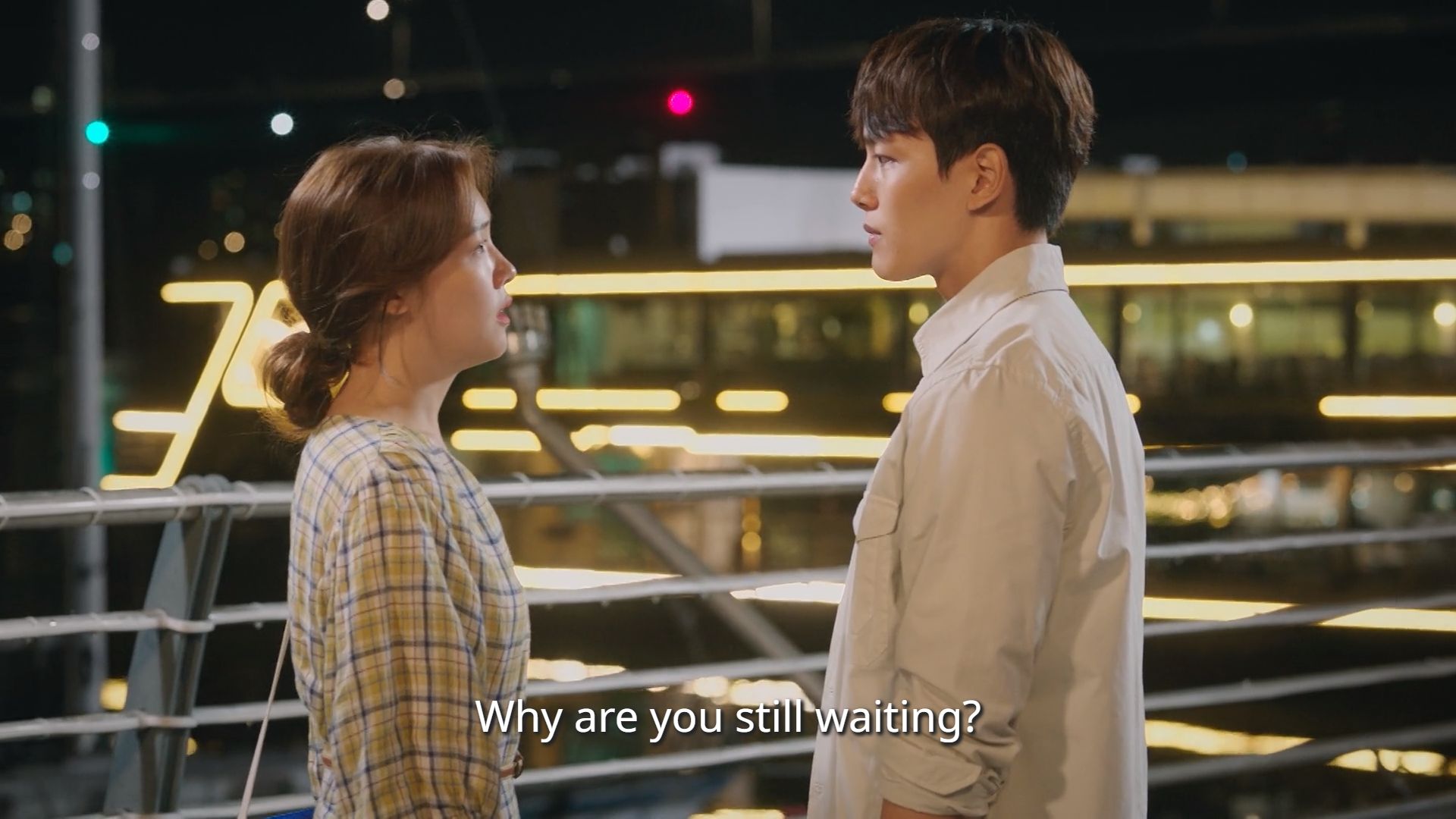 These moments sum up the differences between Wang Joon and Zero-Nine, revealing exactly why we can’t choose between them. Zero-Nine is someone you can rely on no matter what happens. He’s true to his word, always supportive and unfailingly romantic. But he’s a robot, after all, so sometimes his responses are too programmed and turn out strangely in real life. Wang Joon, on the other hand, is a messy, flawed person who keeps making bad choices and missing his chances. But his feelings run deep and, though we didn’t see it at first, his intentions are always good. How will Da Da choose between the adorable robot who’s still learning and the pining human who’s trying to make things right? We’ll have to keep watching to find out!

Check out the first episode of “Absolute Boyfriend”:

Who would you choose, Zero-Nine or Wang Joon? Let us know in the comments below!