Below are three moments that have captivated the viewers:

Uhm Da Da (played by Girl’s Day’s Minah) and Ma Wang Joon have been dating for seven years, but while Uhn Da Da still has feelings for Ma Wang Jun, Ma Wang Joon’s feelings for her have been gradually declining as time passes. On the day Ma Wang Jun attends a movie award ceremony, Uhm Da Da recalls the words he said to her in the past. Due to Ma Wang Joon’s celebrity status, the two had to wear special effects makeup to go on a date at the amusement park. Near the end of the date, Ma Wang Joon asks, “Da Da. Do you want to just get married to me?” He says, “I’m going to work really hard from now on, and when I receive the best actor award, I’m going to call your name on stage. Uhm Da Da, that girl is my girl.” Although cold and prickly on the outside now that he’s become a top star, the past scene showcases Ma Wang Jun’s surprising warm side.

Episode 9: When Ma Wang Joon confesses to Uhm Da Da what he couldn’t say before

When Ma Wang Joon gets terribly sick, Uhm Da Da takes care of him while everything is in a dreamlike state for him. After Uhm Da Da learns that Ma Wang Joon had been receiving threats, he’s the one who says, “Are you okay? He didn’t do anything to you?” making the viewers touched by his concern. He explains, “I wanted to tell you. But I couldn’t tell you. Because you might have gotten hurt.” He continues, “But when I wake up, I get scared because you keep moving further away day by day. I feel as if I’m really going to lose you. Da Da, I never thought of us as having really broken up. I just thought we were temporarily separated. So please come back to me now. These are my sincere feelings.” Ma Wang Joon’s sincere confession was not only delivered to Uhm Da Da, but also to the viewers. 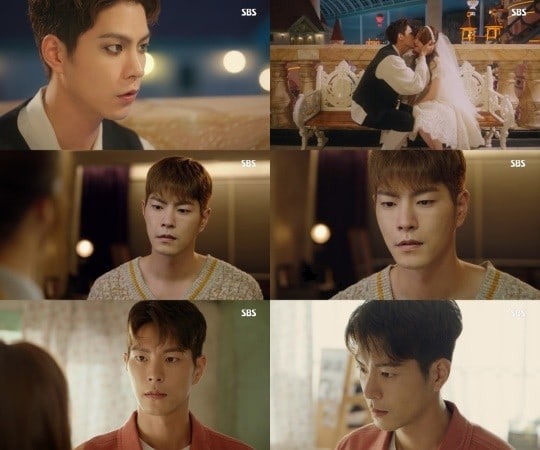 Episode 10: Despite rejection, Ma Wang Joon is unable to give up and confesses his true feelings

Regretting and blaming himself for his breakup with Uhm Da Da, Ma Wang Joon finally realizes his true feelings and proposes. However, Uhm Da Da rejects him despite sensing his sincerity. When his manager Yeo Woon (played by Ha Jae Sook) asks him if he’s going to give up like this, Ma Wang Joon decides to propose once more. During the meeting to discuss the drama’s concept, he confesses as he tears up, “I felt certain after we broke up. I can’t be without you. Can you give me one more chance? I don’t expect much. Just don’t stray too far away from me like today. So that I can catch you again.” Ma Wang Joon’s desperate plea made the viewers’ heart race with his sincerity.

Although Hong Jong Hyun’s character has a cold exterior, it’s only to hide his delicate and pure heart, and as the story unfolds, Ma Wang Joon’s emotions have gotten more detailed and three-dimensional. With viewers curious to find out how the love triangle will unfold, Hong Jong Hyun is expected to continue showcasing his divers charms through his portrayal of Ma Wang Joon.

“Absolute Boyfriend” airs every Wednesday and Thursday at 10 p.m. KST. Catch the latest episode below!