2019 K-World Festa has announced its MCs!

For the first day of the opening shows, the MCs will be Ong Seong Wu and Oh Jung Yeon. The second day will be hosted by Kwon Yool and Girls’ Generation’s Sooyoung.

The closing shows will be hosted by Lee Sang Min and announcer Shin Ah Young.

More artists were confirmed to perform at the 2019 K-World Festa!

The opening ceremony will take place on both August 15 and 16.

The lineups for the opening and closing ceremonies of 2019 K-World Festa have been revealed!

The 2019 K-World Festa will take place between August 15 to August 24 at the Olympic Park KSPO Dome in Seoul. The upcoming hallyu festival, which will celebrate various aspects of K-culture, has been receiving much attention for its grand scale that has never been done before. 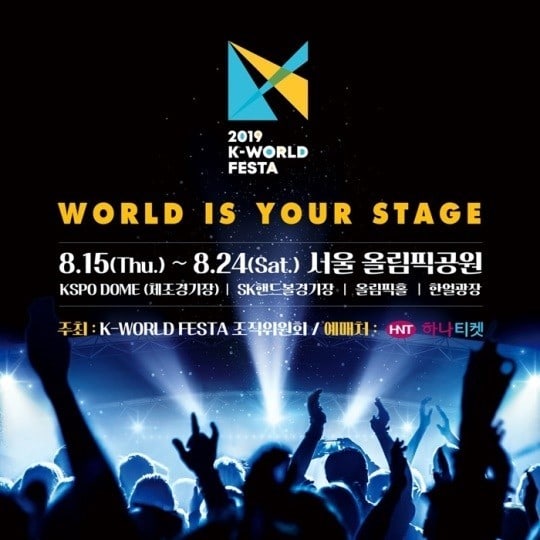 The opening ceremony will take place on both August 15 and 16, and the dynamic lineup will include DJ DOC, Red Velvet, Lovelyz, NCT Dream, The Boyz, and more. Singers with powerful vocals will also be decorating the opening ceremony, including Kim Jae Hwan and Lim Jae Hyun with their emotional new releases.

2019 K-World Festa will be the leading hallyu festival that everyone can enjoy with diverse aspects including the 2019 Soribada Best K-Music Awards as well as an OST concert, band concert, soul concert, hip hop concert, celebrity broadcasts, musical gala shows, and more. YJ Partners will be in charge of the overall production of the festival.