On the June 18 episode, INFINITE’s Nam Woohyun, VIXX’s Ken, Nam Tae Hyun, and former FIESTAR member Linzy participated in a debate about various issues regarding idols. The artists took part in the special as cast members of the musical “Mefisto” (Nam Tae Hyun has since stepped down after a controversy).

“There are many messy situations while promoting,” began Nam Woohyun. “There can be small arguments, disagreements, and coordination of different opinions. All of these are resolved in the dorm because no matter how much you don’t want to see each other, that person’s in the next room.”

MC Sandara Park commented with a laugh, “That made me hate seeing them even more. I used to wear sunglasses in the dorm!” Nam Woohyun added, “Whether you hate or love each other, you have to live together and be together. That way, you talk a lot.”

Ken said, “When you live separately, more problems definitely occur and you need to have constant interest [in each other]. You need to be together to be like a family because you actually see them more than your own family.”

Linzy, who was the only person who chose no, explained, “For me, I need time alone. Because we all lived together, I didn’t have the time to relieve stress on my own and didn’t even have space to make a phone call.” Sandara Park interjected, “The members keep eavesdropping. They ask, ‘Who’s on the phone?!'”

Linzy continued, “I think that for people who have different personalities, they might need time alone. That way, they can heal and more synergy can be produced when they’re with the group.” 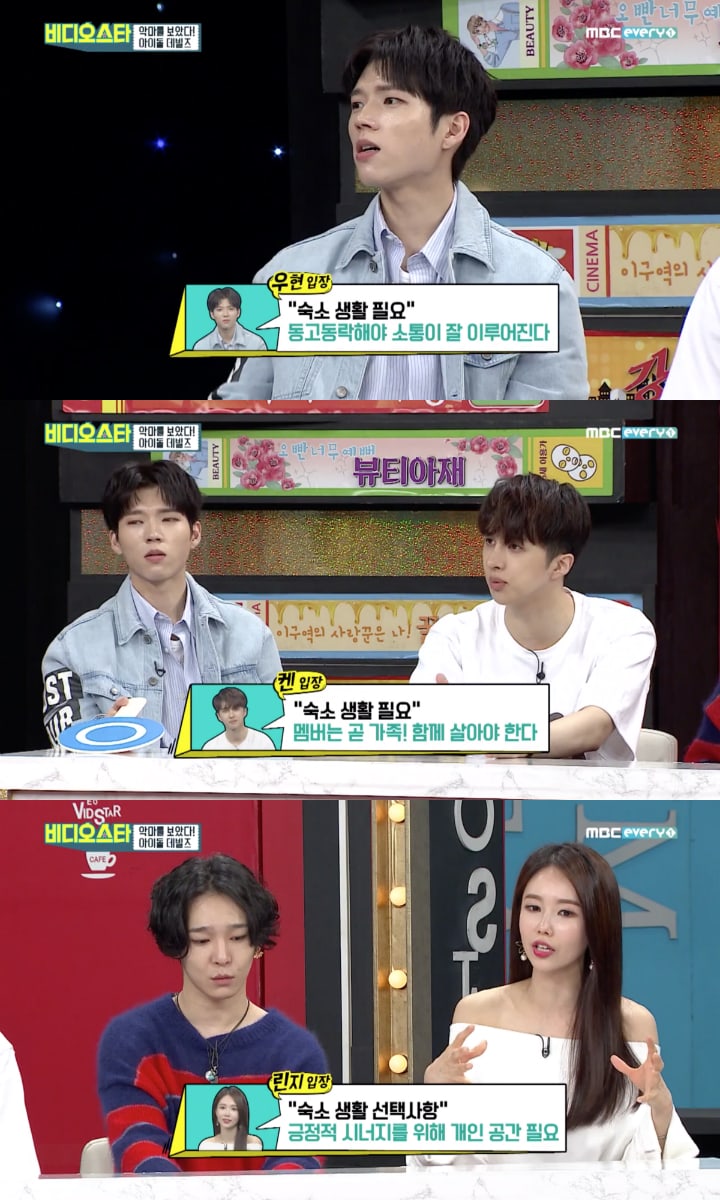 The second question asked about idols dating publicly. Nam Woohyun, Ken, and Nam Tae Hyun chose the option “You have to keep it hidden” and Linzy chose “It’s not bad.”

She brought up FTISLAND’s Minhwan and former LABOUM member Yulhee who are now a married couple. Linzy said, “They got married at a young age and are receiving so many blessings. Seeing them living confidently and freely, I don’t think [dating publicly] is a bad thing. I’m not saying I’ll be completely public but I will be public about it depending on my partner. If they agree to it, I’ll be public about it and I won’t be if they don’t want it.”

Ken explained, “In my case, I express a lot of affection to my fans. I don’t know if that’s why, but fans like me and think of me as their boyfriend. When I think about that…” MC Park Na Rae suggested, “You feel sorry?” and Ken agreed.

He made everyone laugh when he added, “I wanted to clear this up. VIXX hasn’t had any [dating] rumors, so there are rumors amongst girl and boy groups that we like men. There were even people who directly asked us.” Ken then looked at the camera and expressed his love for his fans. 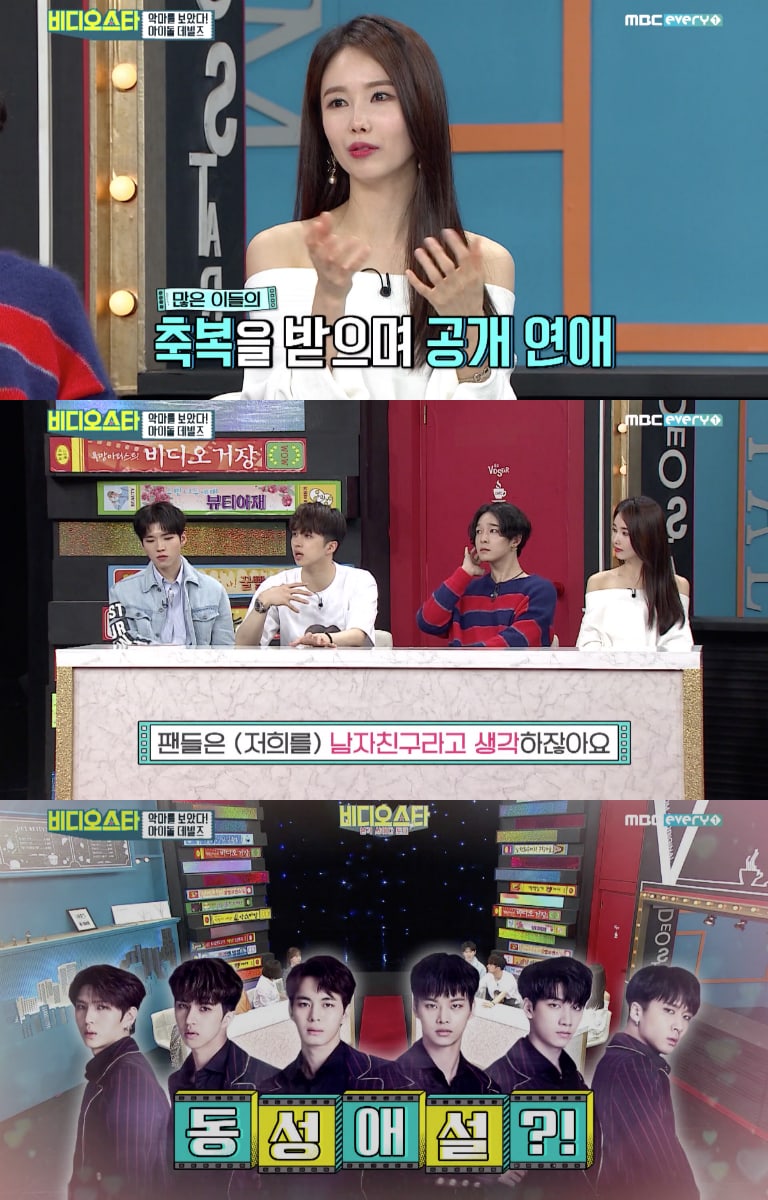 The final question asked if it’s helpful to the group for one member to be very popular. Nam Woohyun answered no while Ken, Nam Tae Hyun, and Linzy said yes.

Nam Woohyun explained, “If you debut as an idol, it’s better for the entire group to become successful rather than just one person. If someone was to ask me to choose between my individual schedule or INFINITE’s group schedule, I’d do INFINITE’s schedule. You last longer and receive love longer when you rise together.”

Ken answered, “It’d obviously nice if you become successful in the beginning, but it’s hard for idols to become successful these days. So if one person becomes popular, people end up looking at the team members. There are many cases where they say, ‘Oh! That one is charming in that way’ and the fans become spread out [amongst the members] and more join.”

Linzy said, “As for me, I’m currently appearing in musicals alone after our official disbandment. If I say I was in FIESTAR, no one knows. But if I first bring up Cao Lu and then Yezi, people seem to know. I feel grateful for them that people remember the group I used to be a part of. Also, I may not know which field I become popular in, but I think it’s something to be grateful for if you become No. 1 in a field and gain recognition for it.” 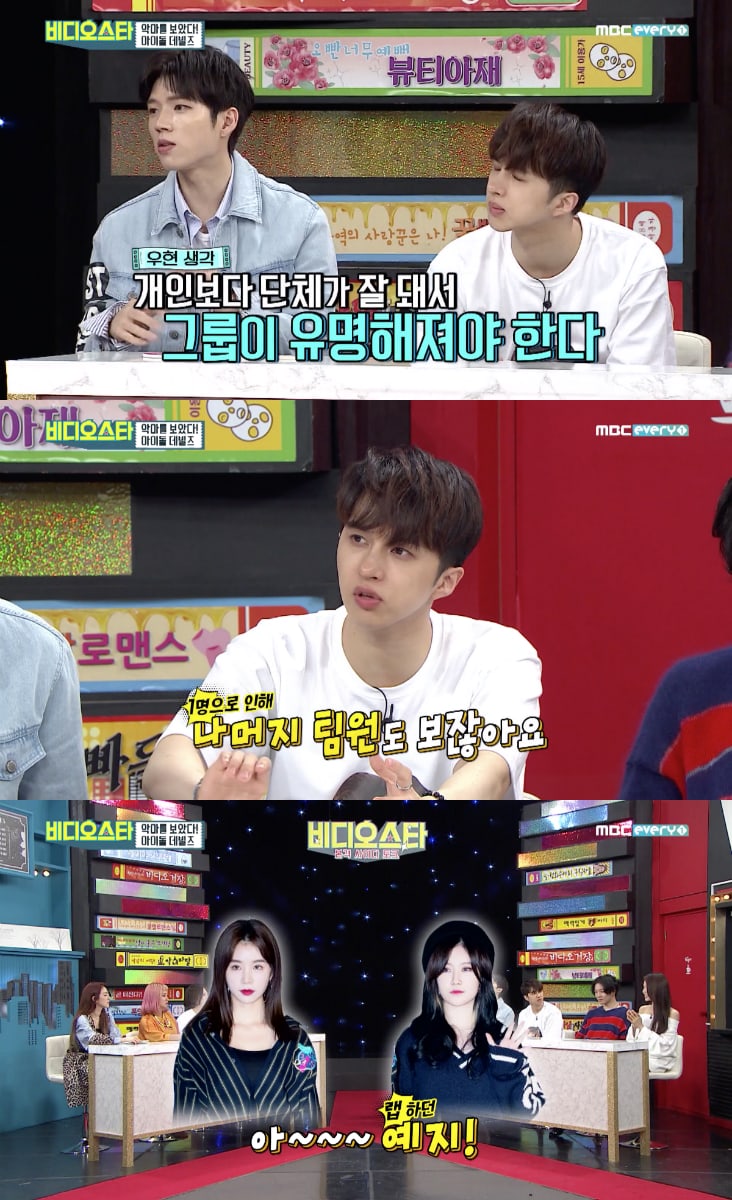 What are your thoughts on these topics?