On June 22, trot singer Song Ga In participated in a concert for “Miss Trot,” where she told the audience what injuries she sustained from a recent car accident.

Song Ga In was previously revealed to be undergoing examinations at a hospital after getting injured in a car accident on June 20.

During the concert, the winner of “Miss Trot” spoke honestly about her health to her fans. She shared, “This morning’s examination results showed that my hip has a hairline fracture and I have a herniated disk. The doctor said it would be better if I was careful and didn’t sing, but I am here to keep my promise with you guys. I am here because I thought it was only right that I personally come out to see everyone. I originally wasn’t going to sing, but now that I’m standing on stage, I feel like I should sing at least one song.”

While she was singing, a fan in the audience yelled out, “Be strong,” bringing the singer to tears. Despite her tears, Song Ga In was able to flawlessly finish her performance. There were many tears in the audience as well, as they emotionally watched while the singer was unable to sing to her hearts content.

Song Ga In added, “I am really sorry for causing everyone so much trouble. I’m here today thanks to you guys. I will work hard to get better and come back healthier.” 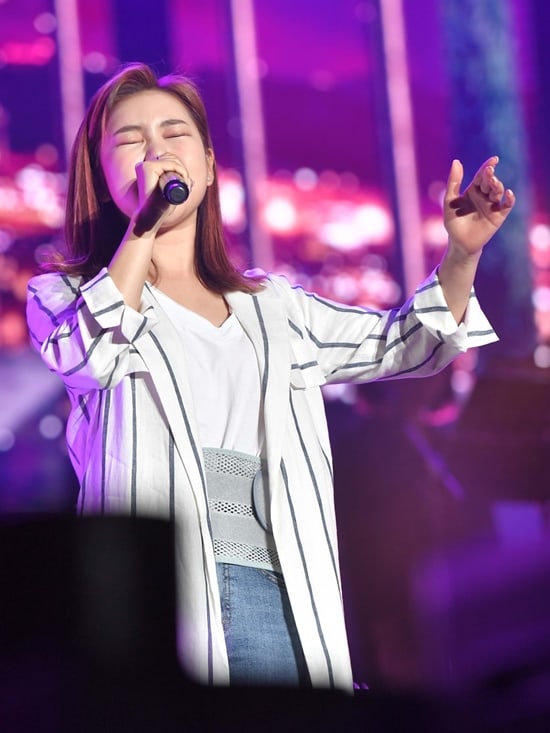 Instead of wearing a costume to perform, Song Ga In was dressed casually and wore a back brace. Before her entrance, MC Ding Dong exclaimed, “Everyone, don’t you want to see Song Ga In? It was difficult, but I will bring her out.”

On June 21, a representative from Song Ga In’s agency Culture Factory stated, “After the car accident on June 20, Song Ga In underwent examinations at a hospital but will participate in the concert on June 22. In order to keep her promise with her fans, she decided to perform and received permission from the hospital to leave. Please give her lots of attention and support.”

We wish Song Ga In a speedy recovery!

song ga in
How does this article make you feel?