Jun Hyun Moo recently appeared on the June 29 episode of JTBC’s “Ask Us Anything”!

During the episode, Jun Hyun Moo, an entertainer and well-known host of the television network JTBC, revealed how he was able to convince IU to appear on the network’s variety program “Hidden Singer.”

“Hidden Singer” is a show in which the audience must try to distinguish between real singers and their impersonators based solely on their voice. The program was hosted by Jun Hyun Moo during its five-year run.

Kang Ho Dong remarked, “I heard you cast [IU] for ‘Hidden Singer’ yourself.”

In response, Jun Hyun Moo commented, “The impersonators were all cast, but a singer kept declining our casting offer. That person was IU. I’m friendly with her, so I sent her a text message. She told me she wanted to eat kimchi udon, so we met and ate kimchi udon.”

He continued, “I asked her, ‘Why aren’t you on shows these days? The impersonators are looking at only you. It’s such a waste.’ Then, IU told me she’d [appear on the show] right then and there. This was after she had been rejecting our offers for weeks. That’s when I was totally charmed by Ji Eun [IU’s real name].” 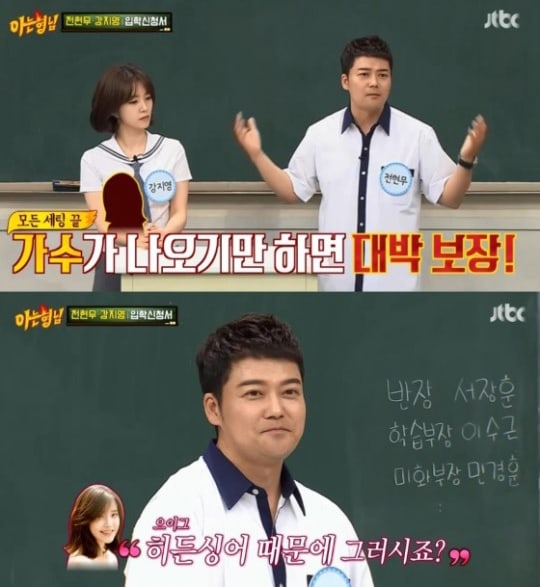