Surprise! It’s your favorite actor! But what in the world are they doing here?

We love a good K-drama cameo. It’s always a special treat when you spot an actor you’ve loved from another project, or sometimes even a whole K-pop group, randomly pretending they’re not hugely famous and taking a small role for a few minutes at most.

K-drama cameos often have some kind of backstory for fans to enjoy. Maybe the cameo stars are real-life friends with the drama’s main cast, or maybe they’re reprising their roles from another beloved drama. Maybe they’ll break the fourth wall with some cute inside joke just for those in the know. A good cameo is a flash of brilliance that always leaves you wanting more. Here are eight of our favorites, all of which are by now iconic.

Lee Jong Suk is a close friend of Lee Sung Kyung, the star of “Weightlifting Fairy Kim Bok Joo,” which explains his brief appearance as a college-age version of Kang Chul, his character in “W.” Here, too, Kang Chul is a shooting champion who looks like he just stepped out of a webtoon (lol). We love when he meets his former “W” co-star Kang Ki Young, here playing Bok Joo’s uncle, an amateur actor. The two have a fateful moment of recognition… and then LJS starts fangirling over meeting a celebrity.

What would you do if the elevator doors slid open and your ex appeared in front of you like a bolt from the blue? Maybe you’d handle it like a pro, as Im Soo Jung does in “Search: WWW.” But what if that ex was Lee Dong Wook? Cue: freaking out, melting into a puddle. Lee Dong Wook’s cameo is only two minutes long, but boy does he make the most of those two minutes, using his whole scene to stare piercingly into our heroine’s soul. What was she thinking when she chose not to marry him? 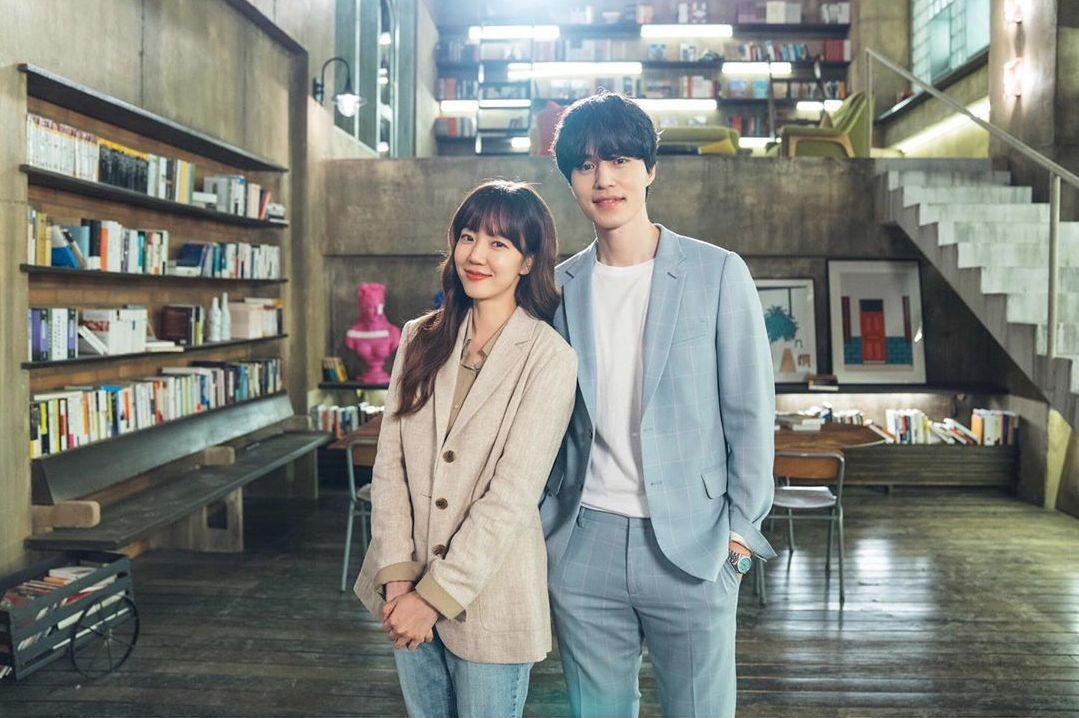 Check out the first episode of “Search: WWW”:

Jo Jung Suk’s brief turn in “The Legend of the Blue Sea” manages to be both hilarious and tragic, which is no small feat, but this is Jo Jung Suk we’re talking about here. He plays a lifeguard/merman who rescues Jun Ji Hyun‘s lovelorn mermaid Shim Cheong, helps her figure out life on land and even manages to make Lee Min Ho nice and jealous while he’s at it. He helps Cheong monetize her mermaid power by making her cry watching sad dramas, because it turns her tears into pearls! A nice guy like that deserves a better fate *sniff*.

Check out the first episode of “The Legend of the Blue Sea”:

We last saw Jung So Min and Seo In Guk together in “The Smile Has Left Your Eyes,” a drama which, well – expect the smile to leave your eyes, that’s all we’re gonna say. Their brief appearance in “Abyss” helps to undo some of the trauma from the last time they were on our screens. This time around, they’re not a tragic pair of tormented souls but a wisecracking pair of aliens with a ride to catch on the last falling star. Bonus: Seo In Guk as a bulldog in a trench coat, which we never particularly asked for but now couldn’t live without.

In 2011 we were all shipping Kim Soo Hyun and Suzy after their starring roles in “Dream High.” Two years later, Suzy had become the nation’s first love, while Soo Hyun was starring in hit drama “My Love From the Star.” It was the perfect opportunity for Suzy to reprise her previous role as Go Hye Mi. She flirts up a storm, claiming Kim Soo Hyun looks just like her ex-boyfriend Sam Dong, his “Dream High” character. It’s a fun moment that leaves Jun Ji Hyun‘s character Chun Song Yi seething and us at home reeling. You mean Sam Dong and Hye Mi broke up??

Check out the first episode of “My Love From the Star”:

6. Jung So Min and Lee Min Ki in “What’s Wrong With Secretary Kim”

Cameo queen Jung So Min makes her second appearance on this list, and this time around she’s here to smash our hearts into a million pieces. So Min appears alongside her “Because This Is My First Life” co-star Lee Min Ki, appearing in flashback as the parents of young Mi So (Park Min Young). Their roles are not quite the same (Lee Min Ki did not screech-sing anywhere near as much the first time around!) but still, we’re sweetly reminded of one of 2017’s loveliest couples, and we even get a chance to see them as young parents.

7. Lee Sung Kyung and Yoon Kyun Sang in “While You Were Sleeping”

After Lee Jong Suk appeared in her drama, Lee Sung Kyung returned the favor alongside their mutual buddy Yoon Kyun Sang. In “While You Were Sleeping,” the two play a couple who happen to be on a date at the same time as Lee Jong Suk and Suzy, disturbing the peace as they loudly coo all over each other and take selfies in matching outfits. Lee Jong Suk can only watch in barely-veiled contempt (or is that jealousy?) as he tries to compete, making pouty peace signs for his own awkward selfies. 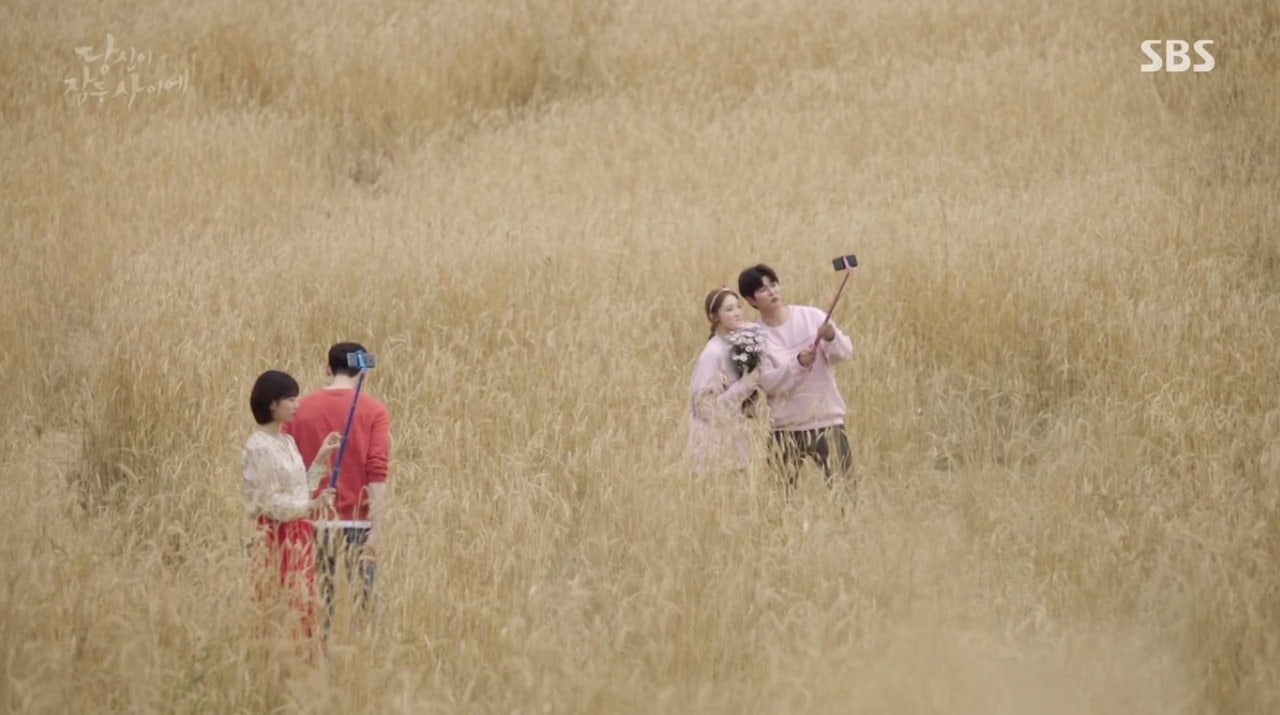 This drama is littered with fun celebrity cameos by director Cha Tae Hyun‘s celebrity friends. In Episodes 3-4, we meet Jang Hyuk on a hoverboard and Defconn helping Yoon Shi Yoon figure out what a cell phone is. Our favorite cameo has to be from MONSTA X, who unwittingly step onto an elevator where idol trainees Ji Hoon (Kim Min Jae) and MC Drill (Dong Hyun Bae) are practicing shirtless dabs. What follows has to be the most awkward two minutes of avoiding eye contact ever. But not for Drill, who assumes MONSTA X were intimidated by him. Sure Jan, tell that to a Monbebe.

Check out the first episode of “The Best Hit”:

Which celebrity cameo took you by surprise? Let us know in the comments below!