During the July 2 broadcast of the program, Suho talked about his friendship with Apink’s Jung Eun Ji, saying, “We first met each other when [Apink’s] Son Naeun and SHINee’s Taemin appeared on ‘We Got Married’ together. We introduced ourselves and became acquainted with one another, and two months later, we ended up dubbing an animation together. We talked a lot about music and became friendly.”

When a viewer commented, “I hope you two release music together,” Jung Eun Ji answered, “We really should release a song one day.” Suho added, “That sounds great.” 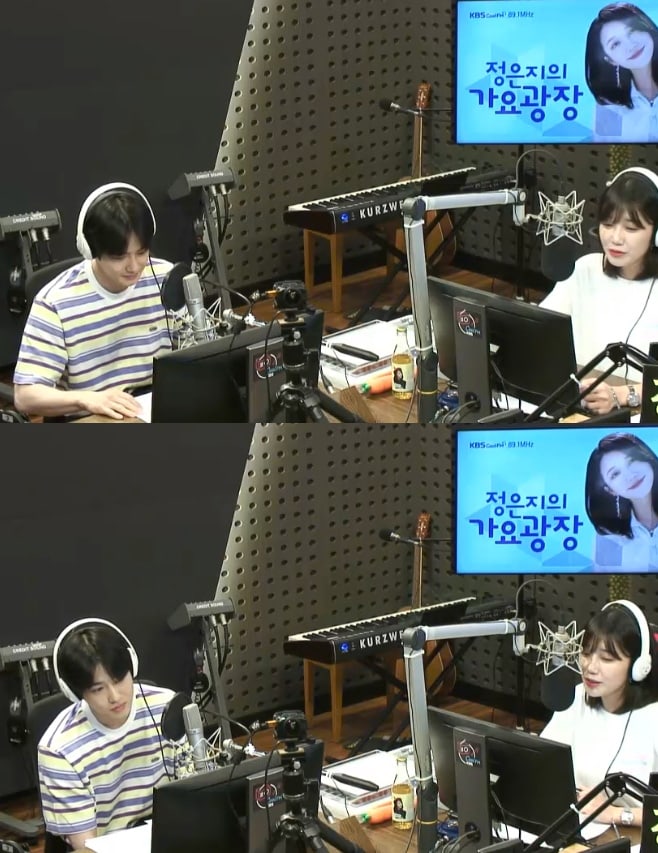 The singer was then asked about EXO’s meeting with President Donald Trump at the Blue House. The group was previously invited to attend a banquet held for President Moon Jae In and President Donald Trump at the Blue House on July 2 as representatives of K-pop. Suho commented, “We met U.S. President Trump, but rather than the power of EXO, I think [we were invited] due to the power of K-pop. K-pop is loved all around the world, and I’m sure [Ivanka Trump] loves many [groups among K-pop], but I think she really liked EXO. I heard President Trump’s granddaughter is a fan of EXO as well, and we met Advisor Ivanka Trump at the PyeongChang Olympics, so I think that’s why we were able to have this opportunity.”

He continued, “This is a little off-topic, but President Trump was actually the one to offer handshakes to us. We were greeting each other, but because of his tweet from that day, journalists were asking him about Panmunjom. He laughed as he answered, ‘I don’t know myself but it’ll be interesting.’ He then told us, ‘You know what I’m saying?’ So we said we knew. I was so surprised. He said the phrase I heard in movies so easily at an international event, so I was really shocked.” President Donald Trump had previously invited Kim Jong Un to the Korean Demilitarized Zone (DMZ) through Twitter.

Suho later mentioned his nicknames and said, “SM Entertainment’s ‘Passion Group‘ includes Yunho, Minho, and [myself]. Although I’m the one who lacks passion the most compared to everyone there, I’ll accept it.” When asked if he would like to be called by other modifiers, Suho answered that he liked being known as “EXO’s leader,” but that it would also be nice if he were known as Kim Jun Myeon, the actor.

Apink
EXO
Jung Eun Ji
Suho
How does this article make you feel?