Jenyer (Jeon Jiyoon) of 4Minute, Park Bom of 2NE1, Song Ji Eun of Secret, and Yubin of Wonder Girls took part in the show as guests and chatted about idol life, while MC Sandara Park of 2NE1 also joined in as they told stories.

Song Ji Eun talked about how she hadn’t expected that Secret’s 2011 song “Starlight Moonlight” would do so well.

“After we’d done exciting tracks, they gave us this song that sounded like a children’s song,” she explained. “Others were doing songs with lyrics such as ‘I Am the Best’ and ‘I Rock.’ The lyrics ‘You’re my starlight, my moonlight’ felt too much like a children’s song. I was worried, and I didn’t want to do it. But then we came in first, so I didn’t say anything.” 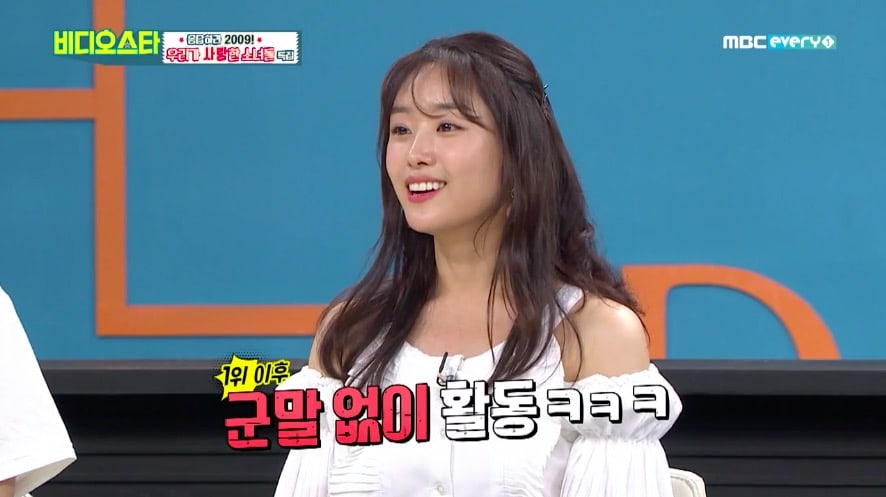 The hosts also asked Song Ji Eun about her “dumpling hair” from their “Shy Boy” era. She explained that the concept had been called “Chun-Li hair,” following the style of the character Chun-Li in the game Street Fighter.

“I thought I wouldn’t be able to pull it off, so at first I tied my hair lower on both sides,” she said. “Then I put it up higher, and then the buns started to get bigger, since people loved it.” She laughed as she explained that she looked like Mickey Mouse because they got so big. 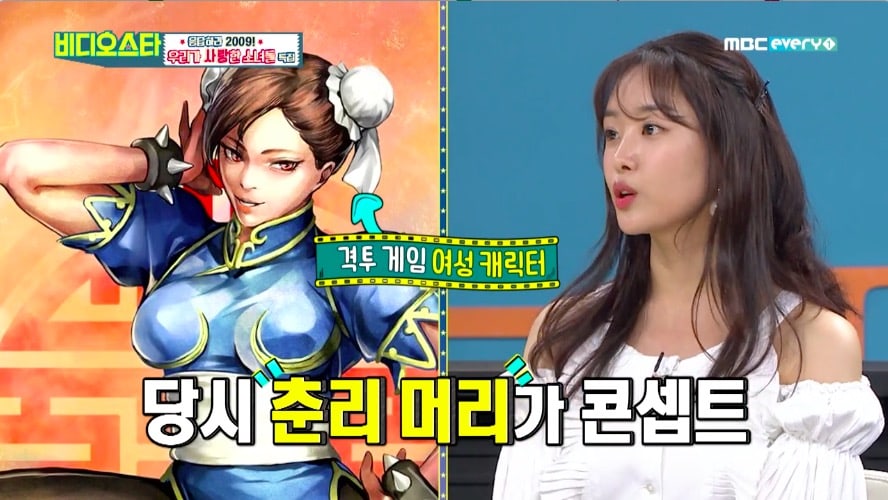 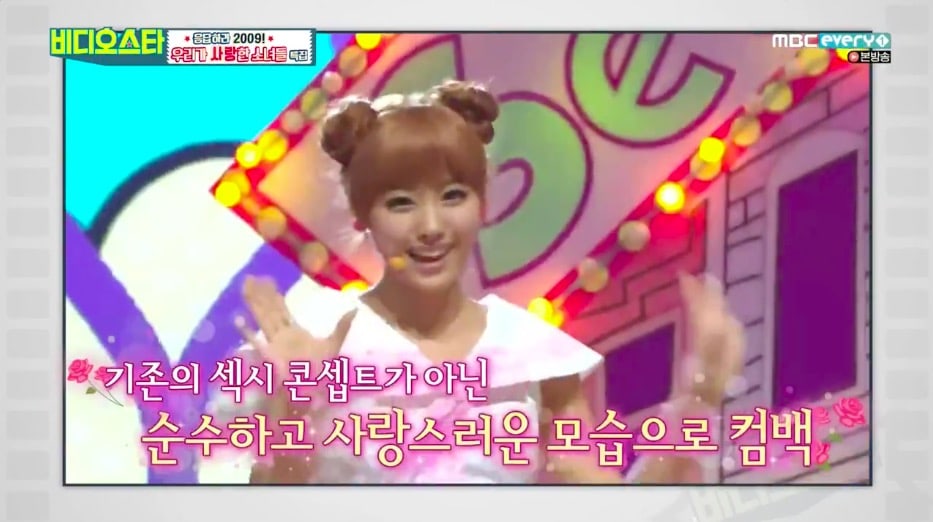 Jenyer said that she’d originally been a vocalist in 4Minute, but the group didn’t have songs where singing was showcased, as their tracks were more focused on dance performance.

She also said that people don’t recognize her now, and talked about how she always wore sunglasses in the period after their debut. “Whenever I left the dorm, I’d always wear sunglasses,” she said. “It was really a ‘mysterious’ concept. I even wore them in the waiting rooms.”

Jenyer shared that once when she was sleeping, 2PM’s Taecyeon came to 4Minute’s waiting room because he was curious about what she looked like without her sunglasses. She said that he was so surprised when she woke up that he ran out of the room. When asked if he was able to see her face, Jenyer said he probably saw half of it, as her sunglasses might have slipped a bit. 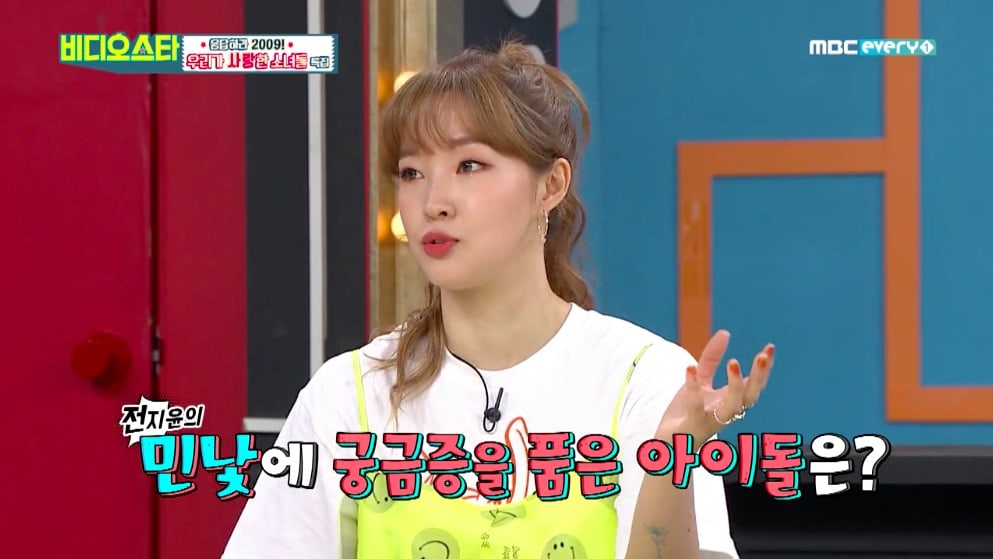 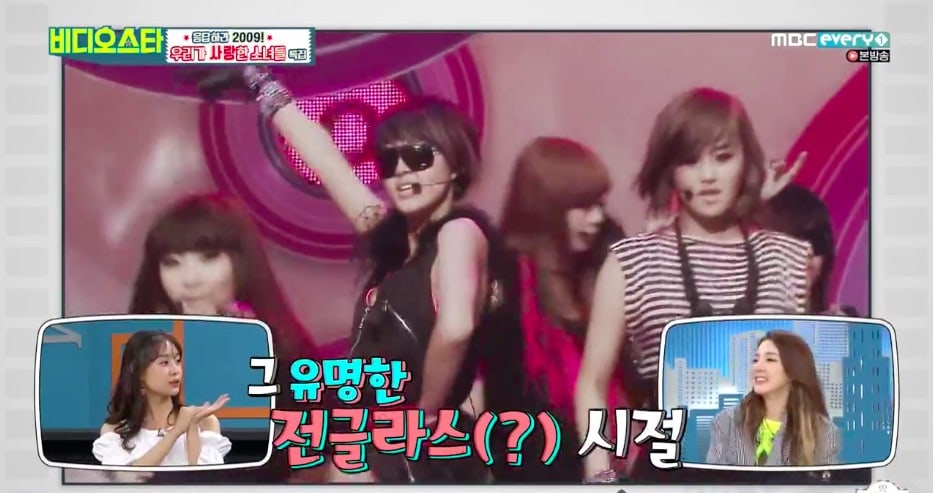 Yubin shared the story of her debut with Wonder Girls and their huge hit “Tell Me.” After Wonder Girls debuted in 2007 with “Irony,” member HyunA left the group due to health issues, and Yubin joined as a new member for their “Tell Me” comeback.

“In the two weeks before my debut, I recorded 12 songs, filmed a music video, and learned choreography for three songs,” said Yubin. “HyunA had left due to health issues and they were looking for a new member, so I was cast for Wonder Girls while I was preparing for Five Girls.”

Yubin shared that the members hadn’t liked “Tell Me” at first, explaining that it was because of the retro concept as they hadn’t lived in that generation. “We wanted to do something pretty, but we had to curl our hair and wear colorful makeup like green eyeshadow, so we didn’t like it,” she said. “I thought that we’d do a concept like ‘Irony’ but we had to do ‘Tell Me,’ so I was really shocked.” 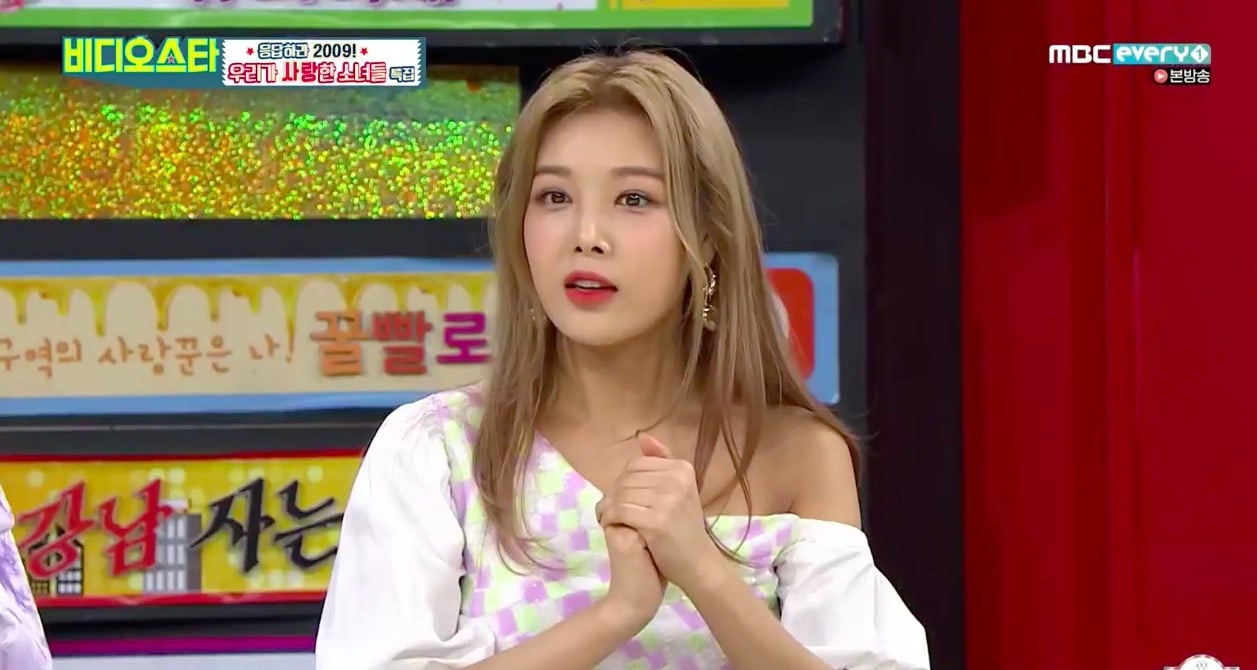 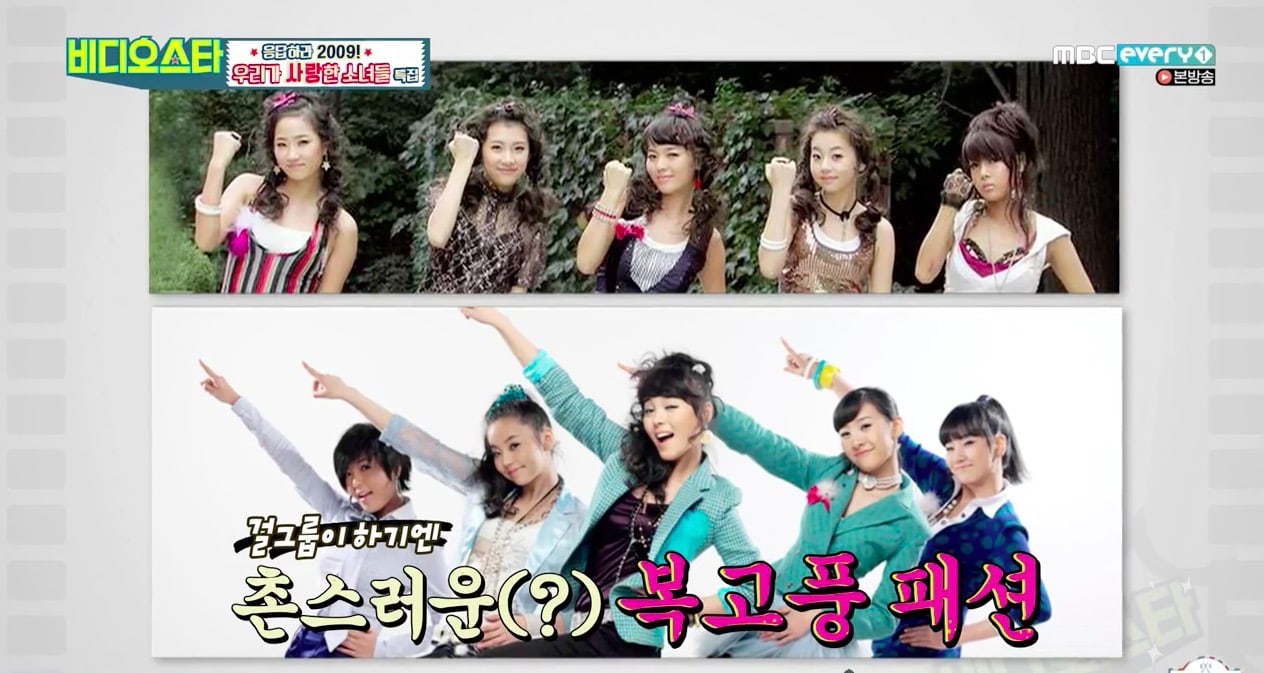 The hosts mentioned to Park Bom that she’d said she had expected that all of 2NE1’s songs would do well, and Park Bom smiled as she confirmed that. 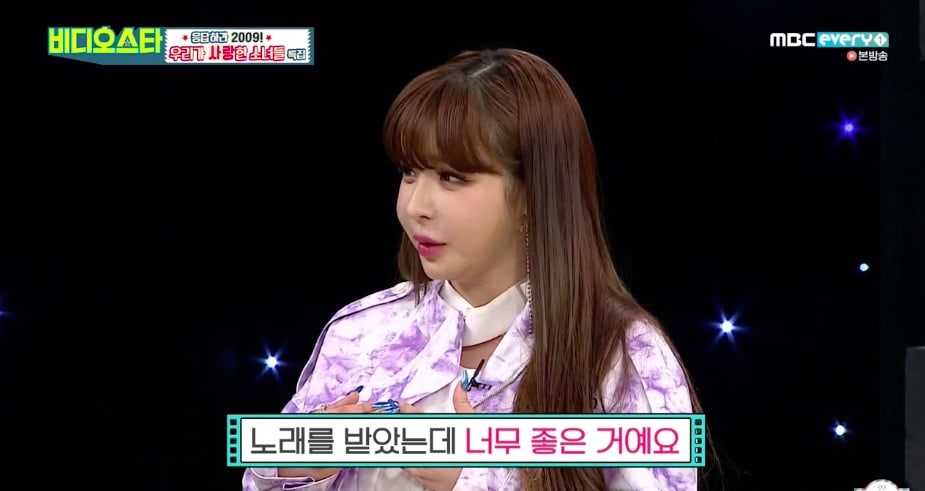 Sandara Park revealed that 2NE1 had a unique way of recording, as producer Teddy would call them into the recording studio and have each member record their parts without hearing the full song. They’d then be shocked when they heard everything put together.

Park Bom shared that there was one song she was concerned about, which was their 2010 track “Can’t Nobody.” She explained, “The genre seemed too fast to me.” Sandara Park added, “We did experimental things, so there were always worries. I worried a lot about whether the public could accept it.” 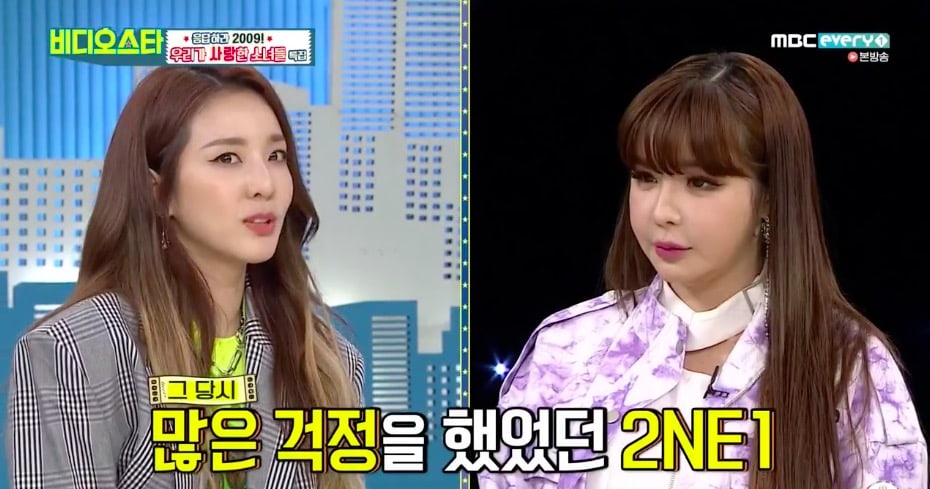 The pair also talked about 2NE1’s unconventional styling, and Park Bom admitted there was a time that she thought it was weird. She described Sandara Park’s famous style with her hair in a column on top of her head, and she said, “It was alright because she’s pretty.” 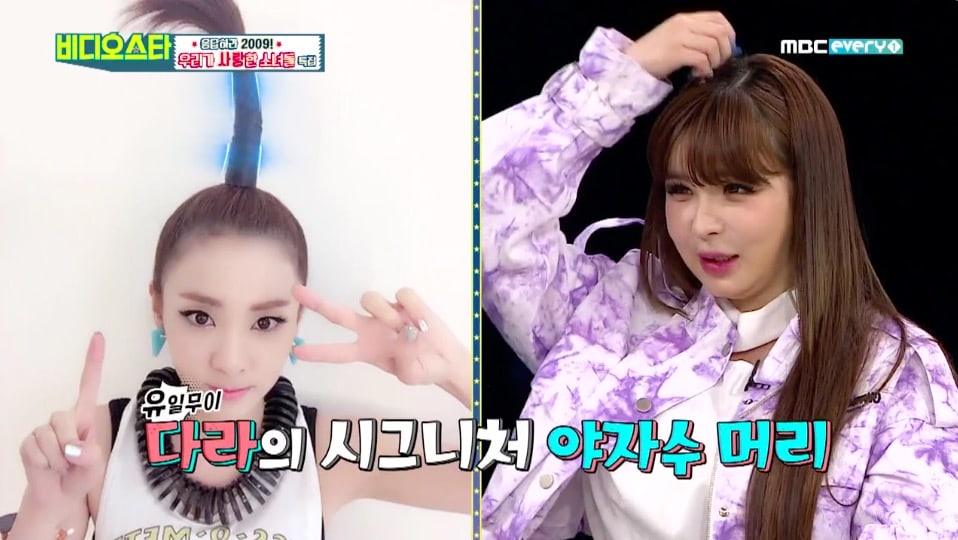 “I didn’t have any complaints, said Sandara Park. “I think I liked things that were unconventional. My hair got higher and higher, like the dumpling hair you mentioned earlier got bigger. I liked it.”

She then admitted that there was one person in the room who had made her feel hurt over their reaction to her hair during their “I Am the Best” promotions. 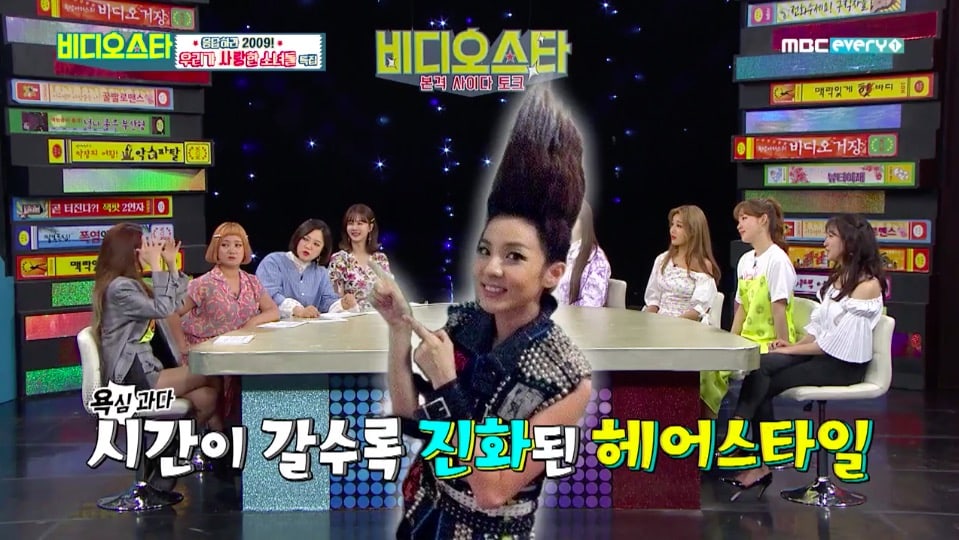 “I finished up rehearsal and was on my way down, when a group was coming the other way,” she said. “The person was surprised as well. They laughed a bit because it was so weird.” She then revealed that it was Song Ji Eun. She was surprised and apologized to Sandara Park, and the pair hugged. 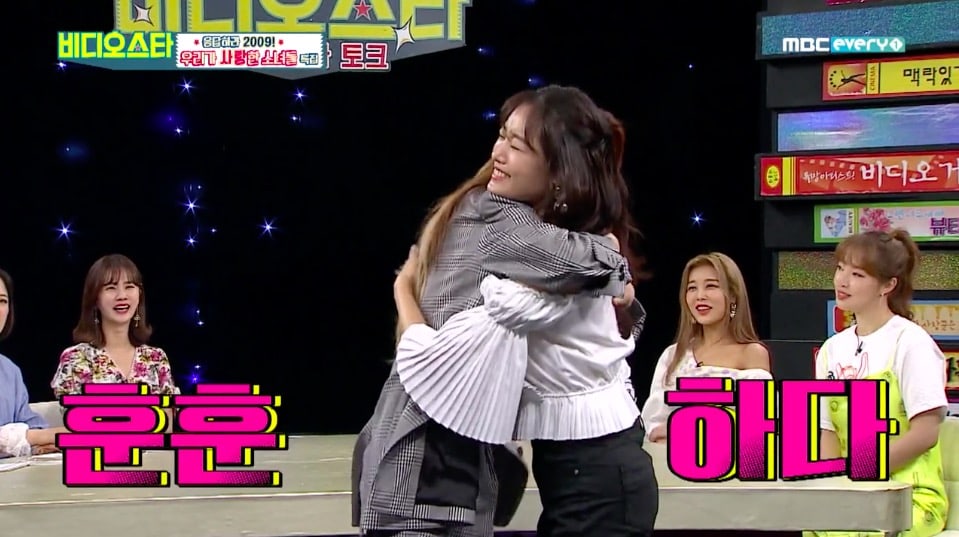 The idols also had fun performing a medley of their songs on the show. Watch it below!