Watch: Yeo Jin Goo And Girl’s Day’s Minah Are Sweet And Goofy Behind The Scenes Of “Absolute Boyfriend”

Recently, the drama shared new footage of Yeo Jin Goo and Girl’s Day’s Minah interacting on set. The clip starts off with the on-screen couple posing cutely. Yeo Jin Goo wraps his arms around Minah’s shoulders and then rests his head on her shoulder. He laughs at her expression, and she smiles warmly in response.

Choi Sung Won suddenly starts singing, and everyone sings along. Minah can’t help but laugh as she asks, “What is happening to the atmosphere?” Yeo Jin Goo adds, “I’m just moving along in spite of myself,” and Minah confesses, “This made me think of Rihanna’s ‘Desperado’.”

Then the guys encourage Minah to sing. She covers her face and attempts to run away, but the fan boys of Girl’s Day don’t know the meaning of giving up. Suddenly, Choi Sung Won asks how to sing Beyonce’s “Halo,” and he attempts to remember the song but ends up singing Adele’s “Hello” instead, causing everyone to crack up.

Next, Yeo Jin Goo and Minah get ready to film the scene where they dance during a memorial service. Hong Jong Hyun joins them, and the excitement heightens as they do a silly dance together. Yeo Jin Goo and Minah practice their couple dance but she laughs hard to cover up her embarrassment by their closeness. 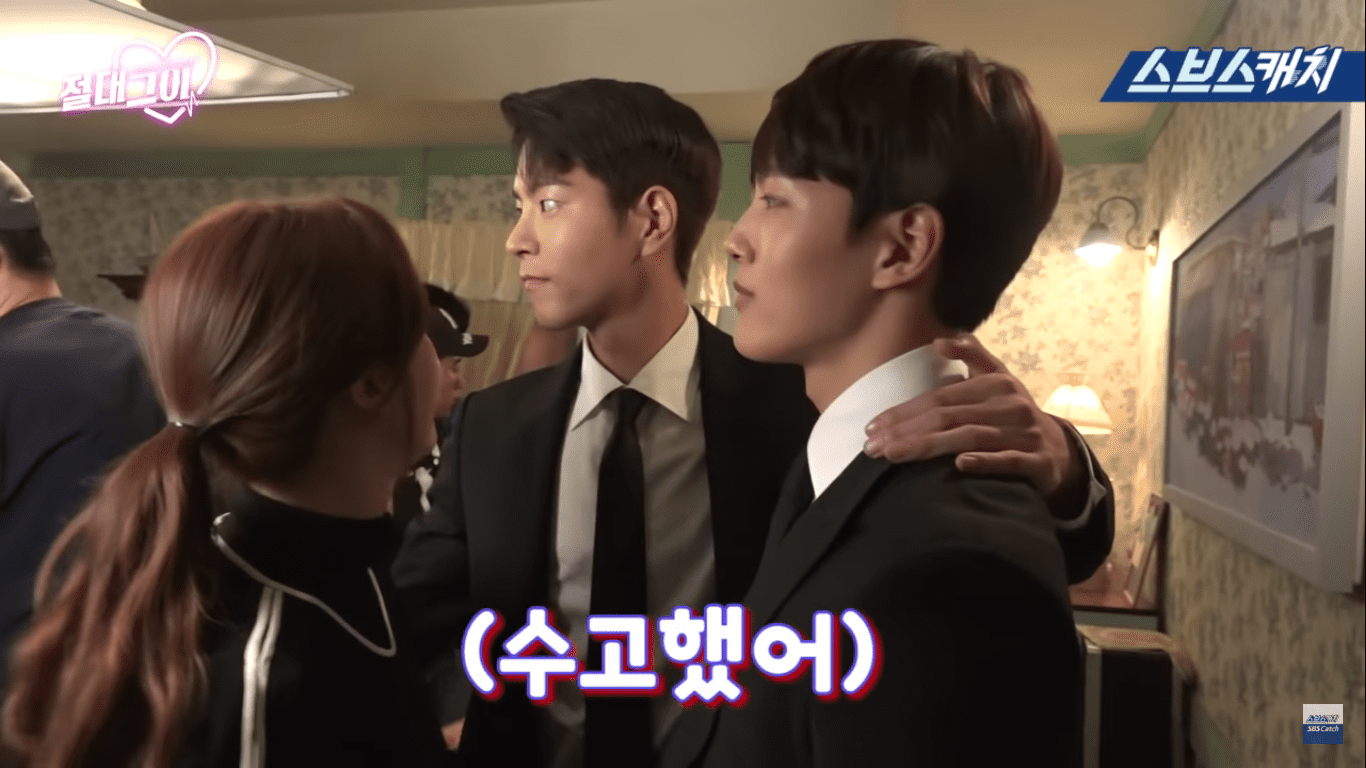 Out of the blue, Minah praises Yeo Jin Goo and starts massaging his shoulders. Yeo Jin Goo spots the making-of video camera and asks in surprise, “What? When did you get here?” Then he advises them, “You need to come secretly. You need to come as a secret guest to see the true side. I don’t want you to witness the superficial side.” She quickly covers his mouth, and he laughs at her attempt.

Despite their goofiness, the professional actors finish the romantic, meaningful scene with perfection. Check out the making-of video here!

“Absolute Boyfriend” airs every Wednesday and Thursday at 10 p.m. KST. Watch the latest episode below: