Bon Appétit: 8 K-Dramas That Will Make Your Mouth Water

If you’re a K-drama fan, then you probably watch them for myriad reasons — the comedy, romance, plot, actors, etc. — but have you ever watched one for the food? Or maybe you’ve avoided one precisely because it’s about food and you’ve got a summer body to think about. Well, if you haven’t watched a drama that made you want to reach through your screen and try the food for yourself, then you’ve been missing out. But it’s okay, because I’m here to help. From Italian pasta to traditional Korean eats, you can find almost any food your heart desires in some K-drama. Just don’t blame me if your diet falls by the wayside or your healthy eating habits take a turn for the worse as a result of watching these dramas.

Without further ado, let’s feast (with our eyes, that is)!

To kick off our “meal,” why not start with some beer? Or maybe soju? Even sake is a possibility. As you may have guessed, “Drinking Solo” emphasizes drinking over eating. That said, it’s not just a bunch of people constantly getting blackout drunk and going so overboard that even the viewers feel secondhand embarrassment (though there is some of that, of course).

“Drinking Solo” instead looks at the many reasons why people may choose to imbibe, such as relaxing after a tiring day at work or consoling oneself after an ordeal. Not only that, but the beginning of every episode blesses us with some lovely food and drink shots that could be straight out of a commercial. 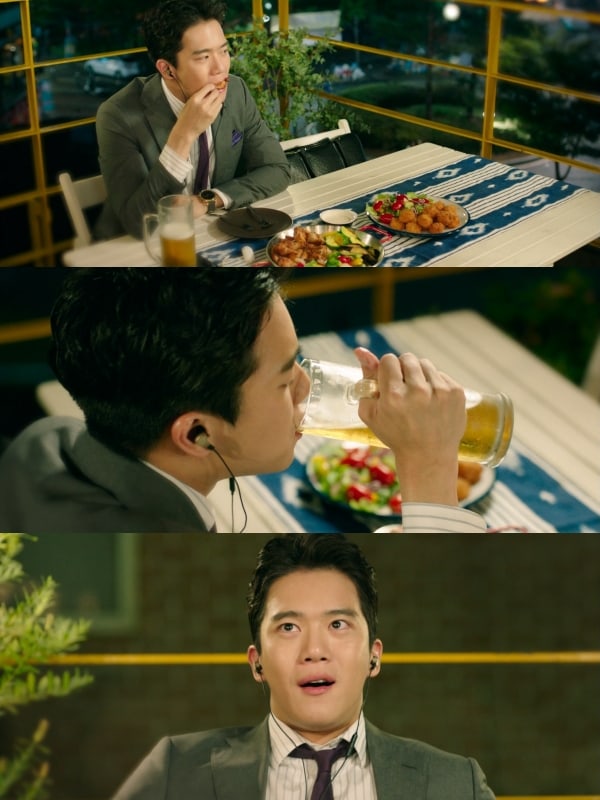 I’m not much of a beer drinker, but this drama definitely had me thinking about going out to buy a six-pack every time one of the characters cracked open a fresh can of beer. So don’t forget to grab yourself a cold one and some snacks before sitting down to watch “Drinking Solo”!

While some restaurant kitchens may be a nightmare (thanks, Gordon Ramsay, for enlightening me), the kitchen at La Sfera in “Pasta” makes me want to eat pasta every day for the rest of my life. Okay, that’s a bit of an exaggeration, but I think even a pasta hater might want to indulge in some after watching this drama. Aglio e olio, vongole, linguine in tomato sauce, three cheese ravioli… Don’t know about you, but I want to eat them all! 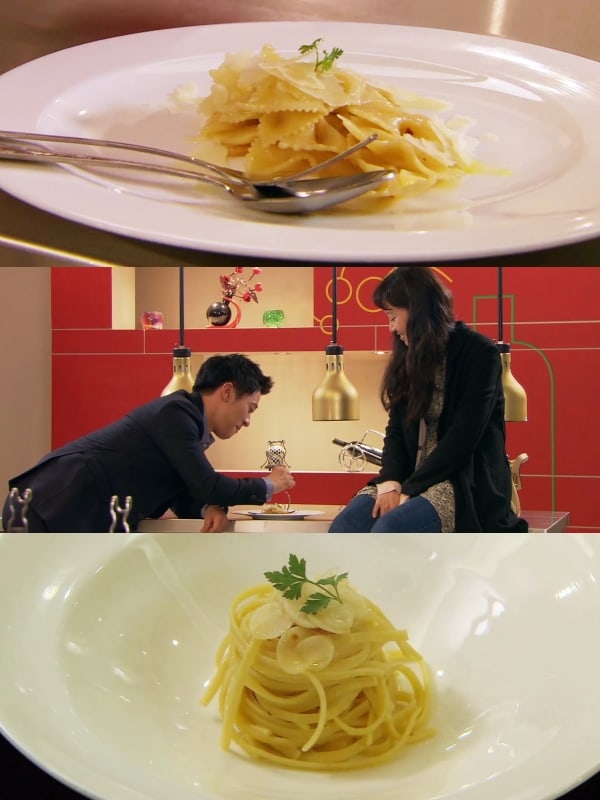 If pasta really isn’t your thing, fear not, for the cooking scenes are still fun to watch and may even inspire you to whip up something more to your taste in your own kitchen. I know that my stove gets a lot more use whenever I watch “Pasta,” anyway.

Just be careful not to get too absorbed in the drama and wind up overcooking your pasta (or whatever it is you like).

If there’s one drama listed here that you definitely should not watch while hungry, it’s gotta be this one. In many dramas, food essentially plays the role of an extra or, at best, a character whose name you kinda know. This is not the case in “Let’s Eat.” From the way the camera slowly pans across a table full of steaming dishes to the frequent close-ups that showcase each element in all its glory, food is truly at the center of this drama.

And it’s not just that they eat a lot of food on this show; they also make a point of relishing every second of their meals. But hey, can you blame them when their food looks this good? 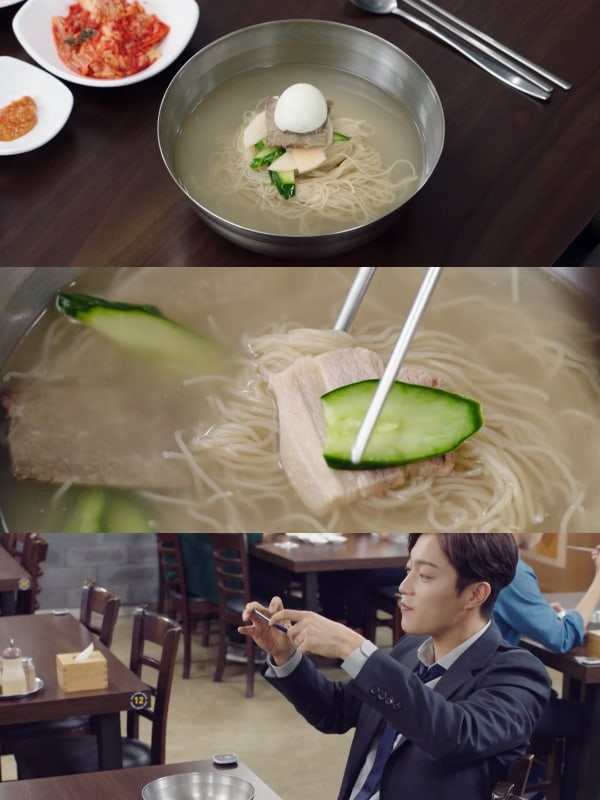 Whether you’re more interested in the process that goes into making delicious food or only care about the final product, “Wok of Love” is sure to have you drooling. At times, it feels like a full-fledged cooking program and not just a drama thanks to the way Poong (2PM’s Junho) describes the food and macro shots that even Food Network would be envious of. This drama clearly knows its way around a tantalizing bowl of black bean noodles (jjajangmyeon) as well. 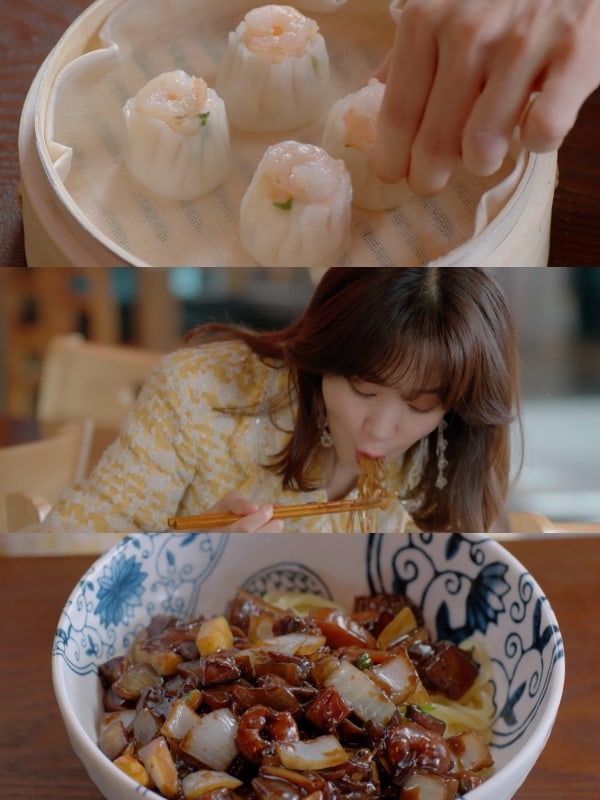 Fair warning, you’re going to want to go out for dim sum after watching this one. Worried you won’t know what to order? Fortunately, there’s a guide for that.

There’s also plenty of food prep to get your stomach growling if that’s what excites you the most.

So forget about buying groceries and dirtying dishes. Perhaps tonight would be a good night to get some pizza delivered and leave the cooking to the cast of “Oh My Ghostess.”

This drama is perfect for those nights where you can’t seem to fall asleep or are in need of something to help you decompress after a long day. Not only do the stories and characters alone make you feel as though you’ve eaten a warm plate of your favorite comfort food, but all the meals look positively delectable and appear to be made with so much care that it’d be impossible to not enjoy them.

Don’t forget to eat dinner on nights when you plan to watch this one, though, if you’re concerned about late night eating. Otherwise, you’ll likely find yourself rummaging through your kitchen cabinets for a midnight snack.

How about another midnight snack staple: ramyun (instant noodles)? Just thinking about this drama made me crave a steaming hot bowl of ramyun to the point that I actually had to go and boil some while writing this. Despite some of the creations in this show being more than a little questionable (how about some chocolate sauce and ramyun?), I doubt anyone can make it through the whole series without having ramyun at least once. 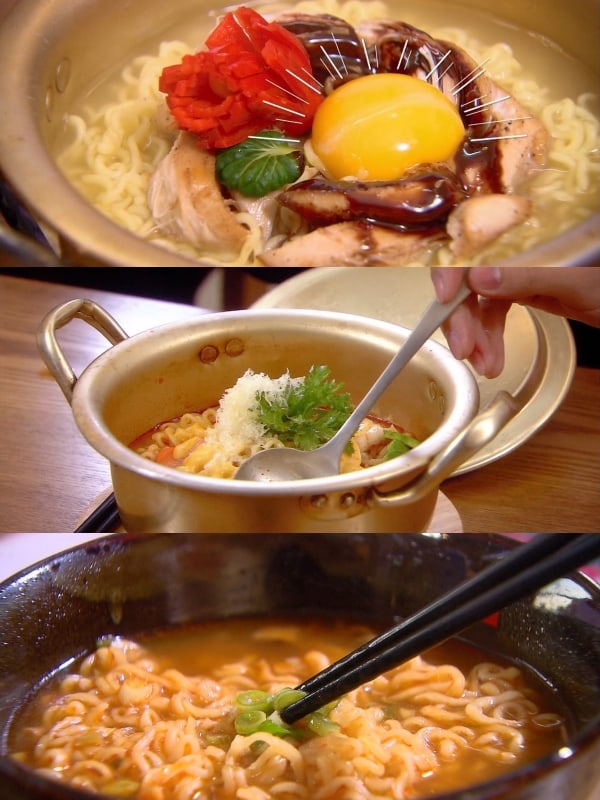 Don’t leave Cha Chi Soo (Jung Il Woo) and the rest of the ramyun shop crew hanging. Go give the show a watch!

What better way is there to finish out this list than with a drama about a pastry chef? If you’re trying to keep your sweet tooth in check, this one may not be a good pick for you. I mean, just look at the spread below! Does it not look heavenly? 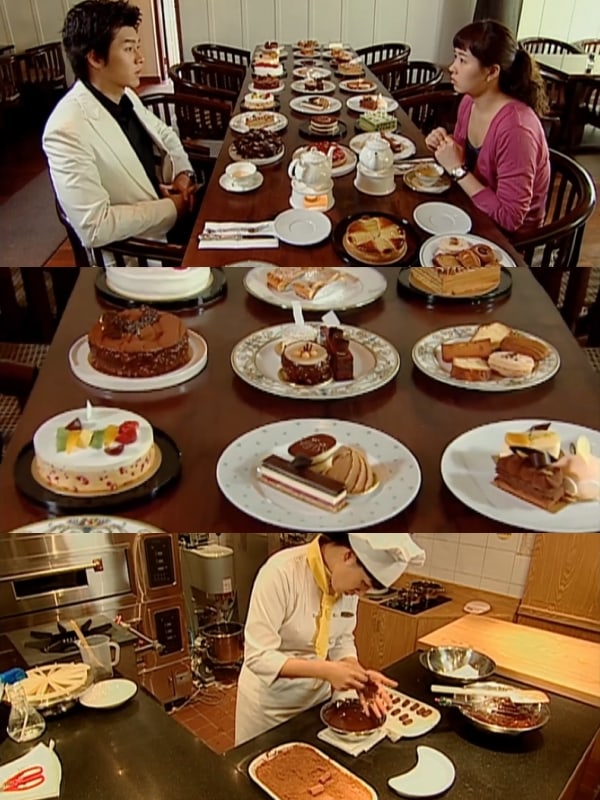 I think I may have gained 10 pounds just from looking at all the stunning desserts in this drama. Also, if you’re anything like me, watching Sam Soon (Kim Sun Ah) temper chocolate, decorate multi-tier cakes, and so on might low-key make you want to become a pastry chef too (or at least try your hand at it).

Which K-dramas have made your mouth water?

seheee is a software engineer by day and an avid K-pop concert goer by night. She also occasionally makes an appearance on Twitter @_seheee.