SBS’s “Law of the Jungle” has released another statement regarding the recent criticism for catching and consuming giant endangered clams in Thailand.

On July 8, a source from the show made a statement regarding the actress Lee Yul Eum, who was seen catching the clams during the episode. They stated, “We deeply apologize once more for this [recent] issue. After implementing a thorough internal investigation, SBS will be taking strong measures following the findings. We will also be taking on the posture of shouldering maximum responsibility so that Lee Yul Eum will not be negatively affected.”

“Law of the Jungle” was recently criticized for hunting and cooking endangered clams in Thailand, which was shown during the June 29 episode. In response, the production team officially apologized and explained that they were not fully informed about the local regulations.

However, a recent report stated that “Law of the Jungle” had sent an official document back in March to the Thailand Department of Tourism on information regarding the filming of the June 29 episode. Featuring a signature by SBS producer Cho Yong Jae, the document states, “We SBS Broadcasting center hereby agree and acknowledge the following: Throughout the filming, there will be no filming and presentation of hunting in Thailand.” 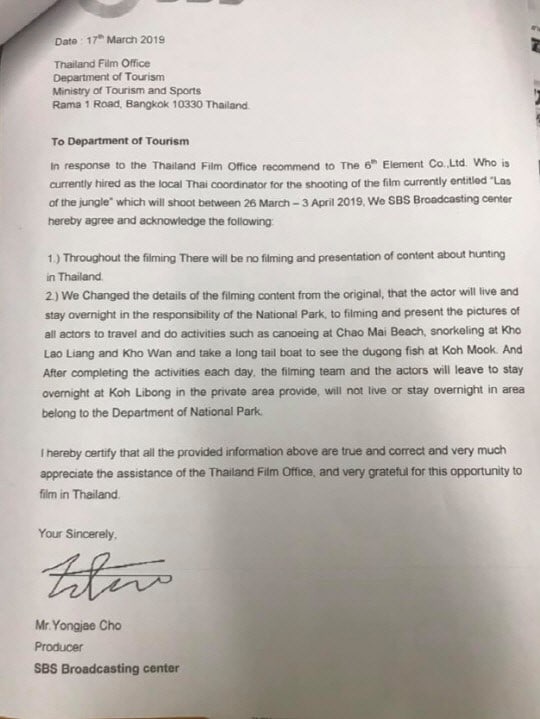 This document differs from their official apology, which states, “We sincerely apologize for failing to become fully informed of the local regulations regarding giant clams in Thailand, and we will be more aware of our actions in the future.”

Law of the Jungle
Lee Yul Eum
How does this article make you feel?