How “Search: WWW” Characters Express Themselves Through Their Distinct Styles

Fashion is an essential ingredient of K-dramas, and there’s often a lot more behind a character’s clothes than just pure style (although we do love a good fashion flex!) Clothing can give clues to a character’s personality and motivations, or even foreshadow the future. Here is a rundown of each main character’s wardrobe choice from “Search: WWW,” as well as what they mean for the overall storyline of the show. 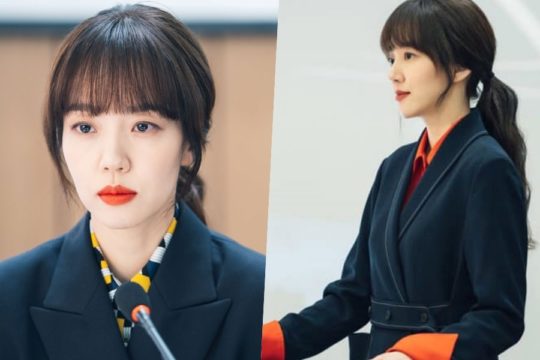 The show’s leading lady, portrayed by the talented Im Soo Jung, begins as a leading executive of tech giant Unicon. Unicon is the No. 1 search engine company in “Search: WWW,” but fierce competition with rival group Baro makes the corporation a high-pressure workplace with no room for mistakes or failure. Her clothing of choice at the company is generally pretty formal, consisting of mostly dark items layered over some more colorful pieces. Many of her outfits at the beginning of the show also contain a pop of orange — hinting at the brighter personality hidden beneath her serious exterior, and maybe even foreshadowing her transferal to Baro later in the show. 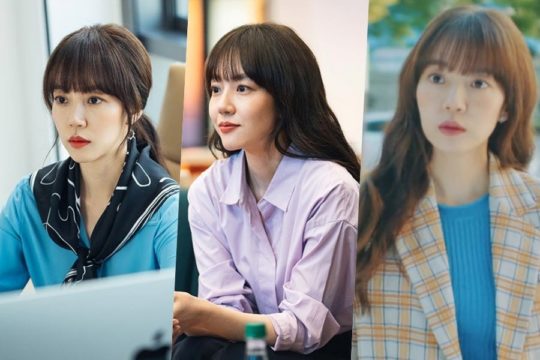 After she switches to working at Baro, Bae Ta Mi’s wardrobe brightens up considerably. Her clothing falls in line with the cheerier atmosphere of her new job as her caring and capable personality blossoms under Baro. 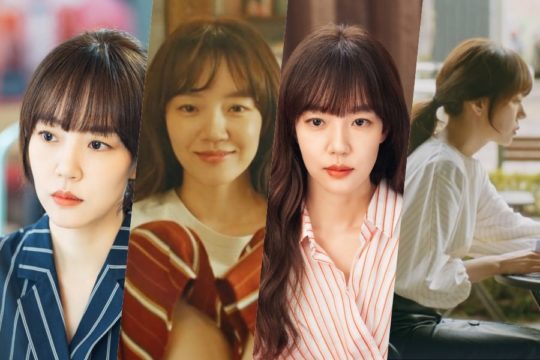 However, there’s one aspect of Bae Ta Mi’s fashion that stays consistent across the drama: her love of stripes! Stripes are her pattern of choice whether her outfit is more formal or more laid-back, which alludes to her straight-laced and confident nature. Her minimal eye-makeup paired with a brighter choice lip color brings all the attention to her words, letting her natural leadership skills (and the show’s brilliant script!) shine. 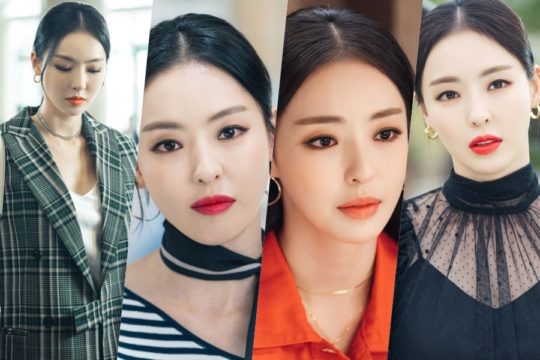 The fierce and fashionable Cha Hyun, played by Lee Da Hee, is the show’s style icon. The Baro manager’s strong outfit choices showcase her fiery personality, fearless attitude, and unwavering loyalty to her beliefs. All that said, it’s easy to see how a character like Cha Hyun would be truly unforgettable. From her incredible accessory choices to her signature bold lip, everything about her screams full-on lady boss. 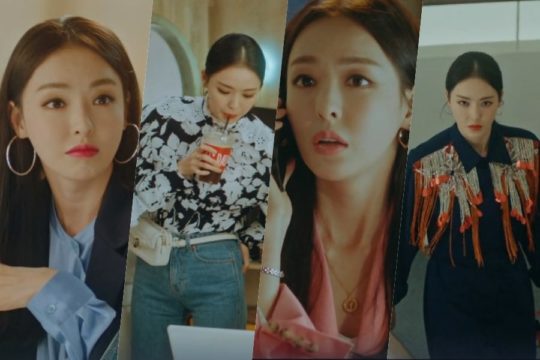 Cha Hyun knows what she wants, and she’s not afraid to go get it. While her brashness sometimes clashes with other characters on the show, she quite literally wears her confidence on her sleeve and is not afraid of a good fight. Plus, as she proved in Episode 5, there’s no feeling quite like exacting revenge with your new bestie in a perfectly color-coordinated ‘fit. 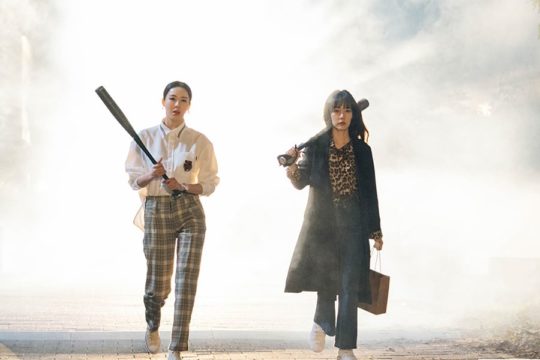 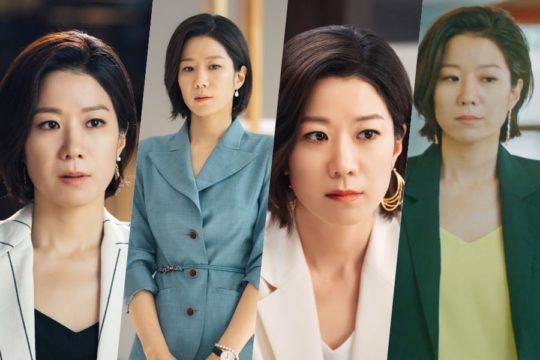 The drama’s reigning pantsuit queen is none other than Unicon director Song Ga Kyung (Jeon Hye Jin). While her work personality is certainly strict and uptight, as showcased by her consistently polished look, she also hides a great deal of pain inflicted by her mother-in-law beneath her hardened exterior. Her “I-mean-business” look reflects her lightning-fast smarts, but it also showcases the strict entrepreneurial values (company success over personal satisfaction) that her mother-in-law forced upon her. But it’s not all ho-hum fashion from this serious business exec — she definitely knows how to spice up any look with a pair of statement earrings! 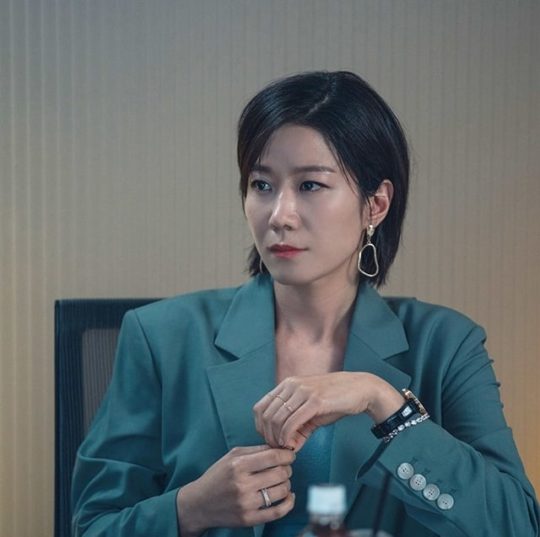 Viewers also finally saw Song Ga Kyung let her hair down (or tie it up!) in one of the show’s most recent episodes, appearing in a casual t-shirt while cooking herself a meal. Perhaps the hip hop vibe of this outfit and adventurous accessorizing alludes to a wilder side of the show’s resident ice queen that has yet to be revealed! 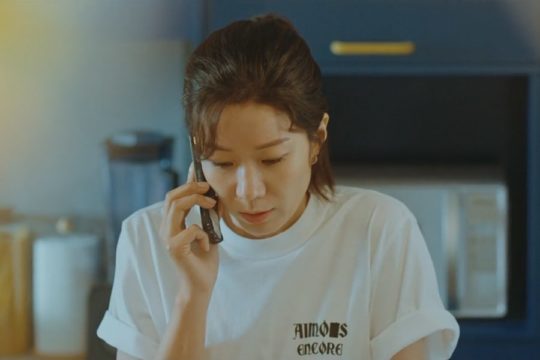 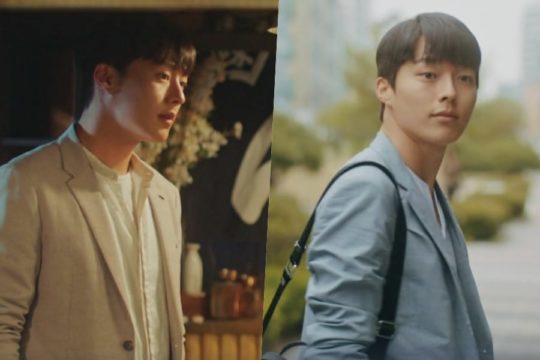 Leading man and Bae Ta Mi’s love interest Park Mo Geon (portrayed by Jang Ki Yong) works at Unicon as a music composer. While his workplace fashion isn’t quite as serious as the other Unicon employees, he still dresses up considerably from his standard boyfriend-material look. His work outfits of choice are often softer in color, with open buttons and casually wrinkled collars. This is certainly reminiscent of his inherently kind-hearted and thoughtful nature, undeterred even by the austere Unicon office. 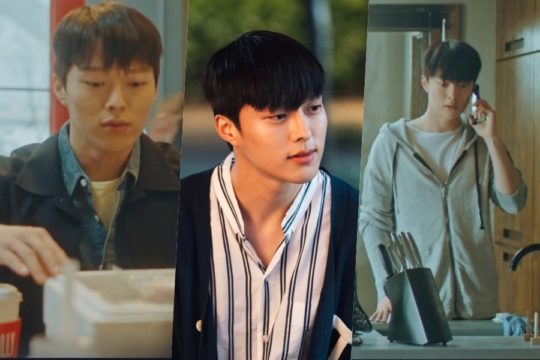 Park Mo Geon’s casual attire is much more laid-back by comparison, usually consisting of sweaters or jackets in soothing blue tones layered over a t-shirt or button-up. His vibe is much more gentle and soft, the perfect match for Bae Ta Mi’s more serious personality. 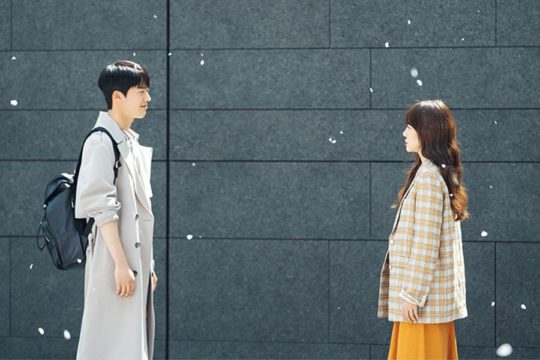 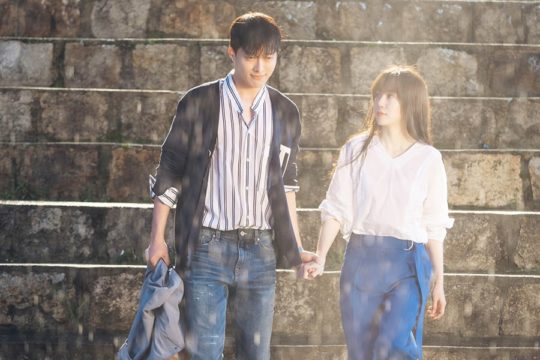 In fact, the pair’s fashion often reflects their seemingly magnetic attraction to each other. When they are together they can often be seen in coordinating colors or complementary styles, reflecting their undeniable bond. From the similar cuts of their coats in the top photo to the varying blue-and-white tones their outfits display in the second photo, this duo is the ultimate couple fashion goals without too much twinning.

Song Ga Kyung has been trapped in a loveless marriage with Ji Seung Hyun‘s character Oh Jin Woo at the demand of his overbearing mother for 10 years. Oh Jin Woo has a very serious and often brusque personality (as would be expected from a top executive at a company like Unicon), clearly evidenced by his wardrobe of dark tones and stiff fabrics. 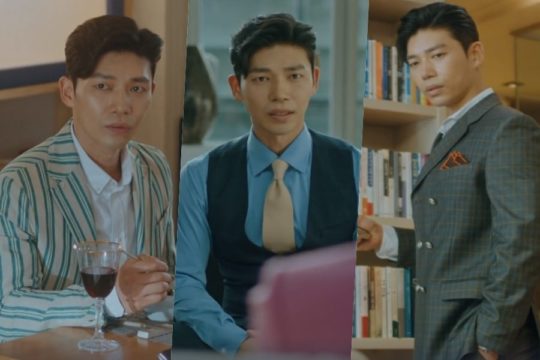 However, initial appearances aren’t everything with Oh Jin Woo. While he can come off as uncaring at first because of his silence on the subject of his mother’s atrocious behavior, he also holds a deep-seated affection for Song Ga Kyung. Despite her insistence that their marriage is purely a business arrangement, Oh Jin Woo proves that he is willing to risk not only his reputation but the reputation of Unicon in order to protect her image. His outfits are also a little more adventurous than his position lets on, perhaps hinting at a future pushback against the iron grip of his mother. 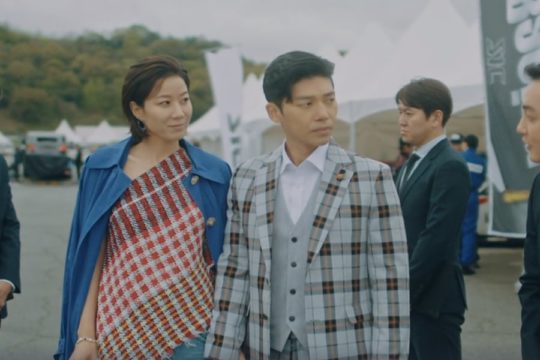 Speaking of adventurous fashion, it’s impossible to mention Song Ga Kyung and Oh Jin Woo without bringing these outfits back. They’re certainly a statement-making couple, and this colorful ensemble could be proof that there’s still hope for their marriage. While there are a lot of colors going on in both looks, there is some coordination between the two as well as some similar pattern structures. Maybe these outfits foreshadow their future rebellion from beneath the crushing influence of Oh Jin Woo’s mother, and the potential for a real relationship between this couple. 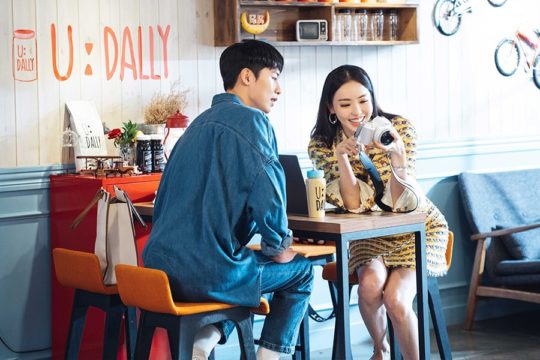 Cha Hyun’s K-drama actor crush Seol Ji Hwan, portrayed by Lee Jae Wook, has only recently made an appearance on the show. However, his immediate interest in Cha Hyun is very clear in the way that he constantly seeks out her attention. While his outfits thus far have mainly been costumes from the sets of his drama, his deeply passionate personality is also evident from the devastating Episode 9 scene between the two about his dog Seol Ri (tears guaranteed), in which viewers got a flashback to a younger Seol Ji Hwan in a relaxed outfit of his own choosing. This adorable shot of the pair makes it clear that they are going to be a fashion match made in heaven. We’re excited to see how their relationship progresses in the remaining episodes (and to see them step out in some incredible couple fashion)!

What are your thoughts on “Search: WWW” so far? Any favorite fashion moments? Comment down below!