Jo Jung Suk shared his wife’s reactions to being partners with HaHa and Kim Jong Kook on SBS’s “Running Man.”

On the July 21 episode, Jo Jung Suk and Girls’ Generation’s YoonA appeared as guests to promote their film “E.X.I.T.”

During a previous episode, Gummy came on the show as one of the artists in the collaboration partner line-up for the show’s nine-year anniversary fan meeting, where she was ultimately chosen as HaHa and Kim Jong Kook’s partner.

As soon as Jo Jung Suk appeared on set, HaHa greeted him as his “brother-in-law.” Kim Jong Kook added, “I was already happy to see Jo Jung Suk, but I’m even happier now that we’re working [with Gummy].”

When asked if Gummy had said anything at home about her appearance on “Running Man,” Jo Jung Suk hesitantly replied, “Can I speak honestly?” He continued, “I was driving and she told me [about her partners]. I said, ‘That’s awesome. It’ll be really amazing if you and Kim Jong Kook sing together and HaHa raps.’ Shaking her head, she said, ‘HaHa wants to sing.'”

After everyone burst into laughter, Jo Jung Suk added, “I’m sorry to say this, but the conversation ended after she said that.” Yoo Jae Suk joked, “HaHa’s name was mentioned and the car turned into hell.” 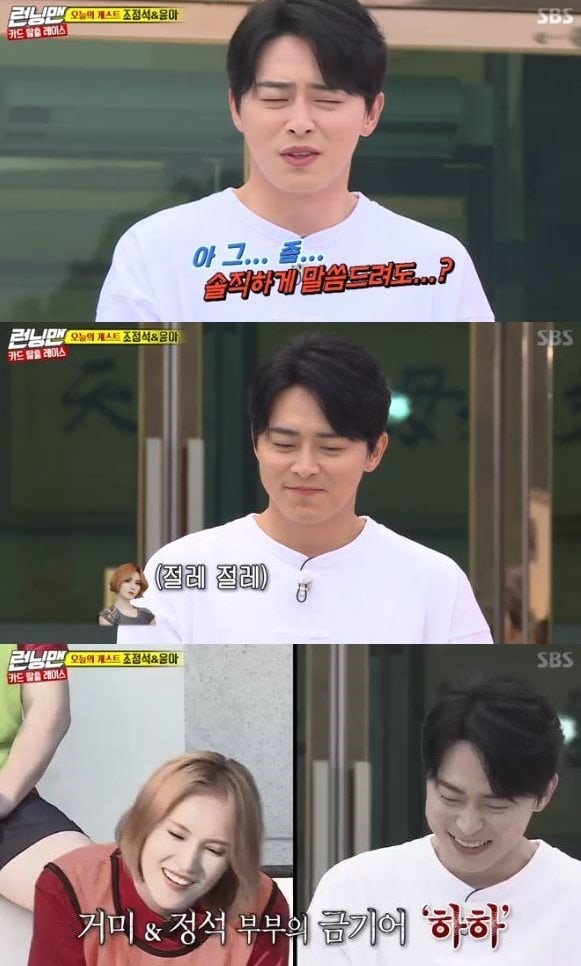