On the latest episode of MBC’s “The King of Mask Singer,” the identity of contestant Bulletproof Sandcastle was revealed!

During the August 4 episode, Bulletproof Sandcastle faced off against a number of vocalists. In the third round, contestant Emotional Gas Station sang Shin Hae Chul’s “You’re Deep Inside My Heart,” while Bulletproof Sandcastle impressed the audience with her cover of Super Junior member Kyuhyun’s “At Gwanghwamun.”

Bulletproof Sandcastle was able to take the win with a score of 58 to 41, and she moved on to the final round to battle the current king Genie.

During the final round, Genie took the stage to perform Lee Hi’s “Breathe,” and after he won with 76 votes to Bulletproof Sandcastle’s 23, he was named the 107th King of the competition.

Following her defeat, Bulletproof Sandcastle remained on stage to reveal her identity. 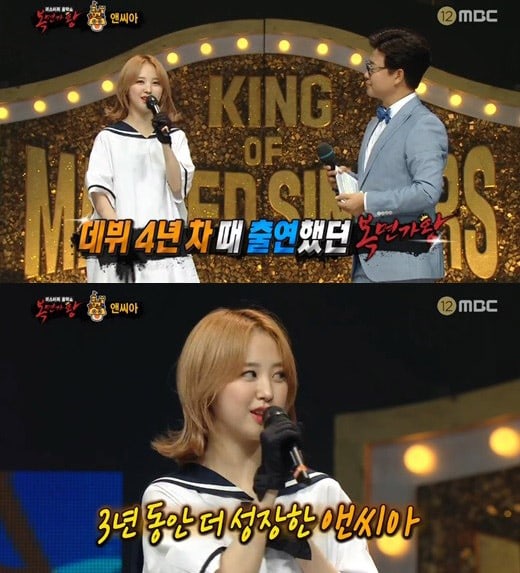 She turned out to be none other former UNI.T member NC.A! She commented, “I thought that composer Yoo Yung Suk would definitely recognize me. I’ve met Shin Bong Sun many times, but she didn’t know it was me. I was grateful that the WJSN members recognized me.”

When asked if anything had changed after her first appearance on the show three years ago, NC.A answered, “Because it had been just four years since my debut, I was scared since I wasn’t very experienced. This time, I thought, ‘Let’s just push on,’ so I chose a song that I wanted to sing.”

After the broadcast, NC.A shared her thoughts on social media. On Twitter, she wrote, “‘I won’t ever fall down! This is Bulletproof Sandcastle~’ was NC.A! I took on this challenge thinking that I would make it further [in the competition] than I did three years ago, but who knew that I’d make it to the [King round]. From now on, I’ll continue to strive towards being a great singer who sings great songs! Please support me a lot.”

NC.A
The King of Mask Singer
How does this article make you feel?