Exclusive: SF9 Creates A Limitless “UNIXERSE” To Share With Fans At Seoul Concert

On August 10, SF9 held their “UNIXERSE” concert at the Olympic Hall in Seoul and Soompi had the chance to attend the concert! 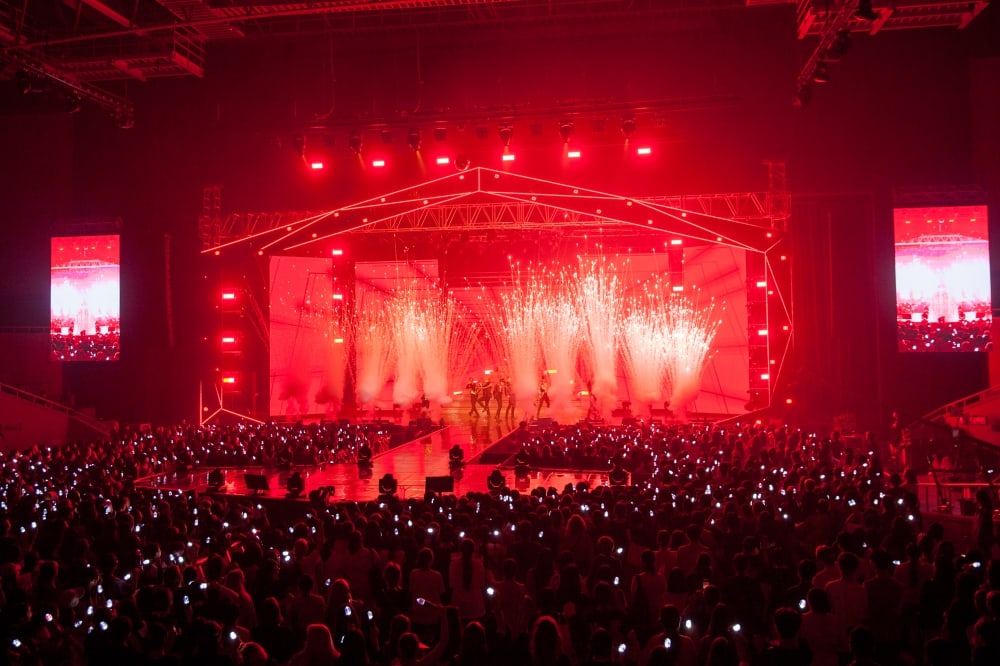 The concert started with a bang as SF9 kicked things off with their most-recent title track “RPM,” followed by “Now or Never” and their debut title track “Fanfare.” The members expressed their excitement of holding their second concert in Korea and spending more time with fans again. They also wished both Jaeyoon and Rowoon a happy birthday, as both had celebrated birthdays recently.

SF9 also talked about the absence of Inseong, who is currently taking a break after sustaining a fracture in his sternum. The members expressed regret that all nine of them couldn’t be on stage together but showed their determination to work harder to fill his empty space. Chani said that Inseong usually leads the conversations at concerts, and as he is an MC for MBC’s “Music Core,” he will try to take on the role and stated, “Inseong will be waiting for us in the dorms. I hope you will get better and make your comeback to the group soon.”

The group opened up about how the theme of the concert was “Universe,” and how they had created a special space to share just with fans, creating hidden messages that were peppered throughout the stages to express their love. They continued to welcome fans to their universe with captivating renditions of “Fall in Love,” “Go Back in Time,” and “O Sole Mio.” 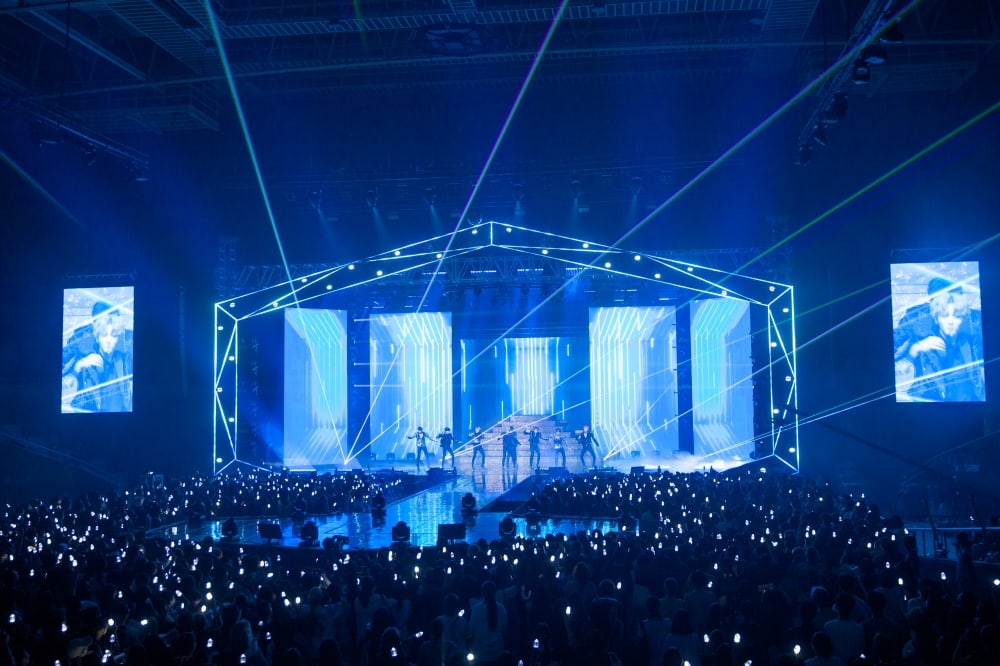 Next came solo performances that reflected the personalities and music styles of each member. First up was leader Youngbin, who performed “Sic Parvis Magna,” a song he wrote the lyrics for and composed the top line of. Dawon took on a cover of Billie Eillish’s “Bad Guy,” while Jaeyoon let his voice shine singing Jeong Sewoon’s “My Ocean.” Zuho capped off the first set to solo performances with an energetic rendition of “Champagne,” a song he composed and wrote the lyrics for. 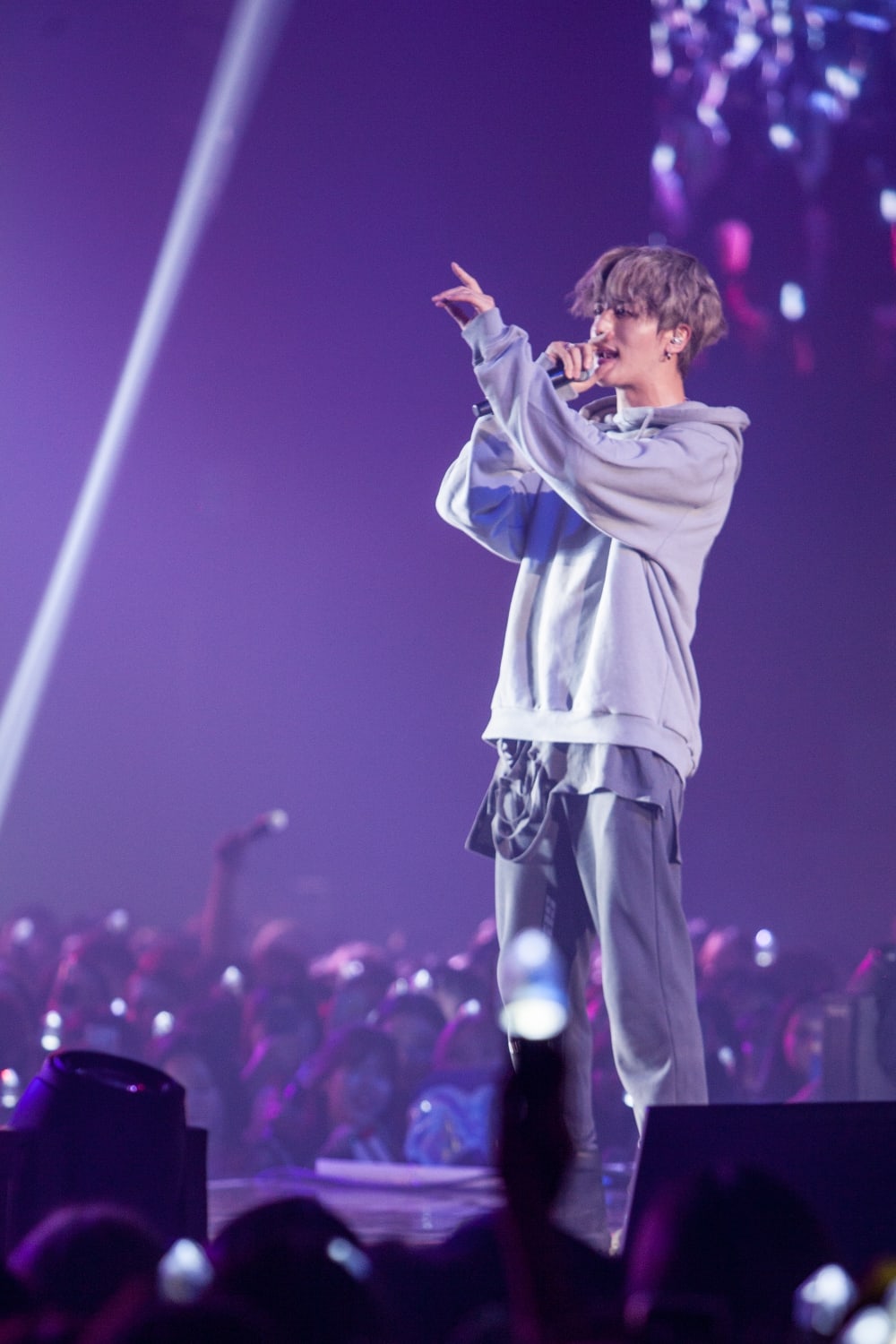 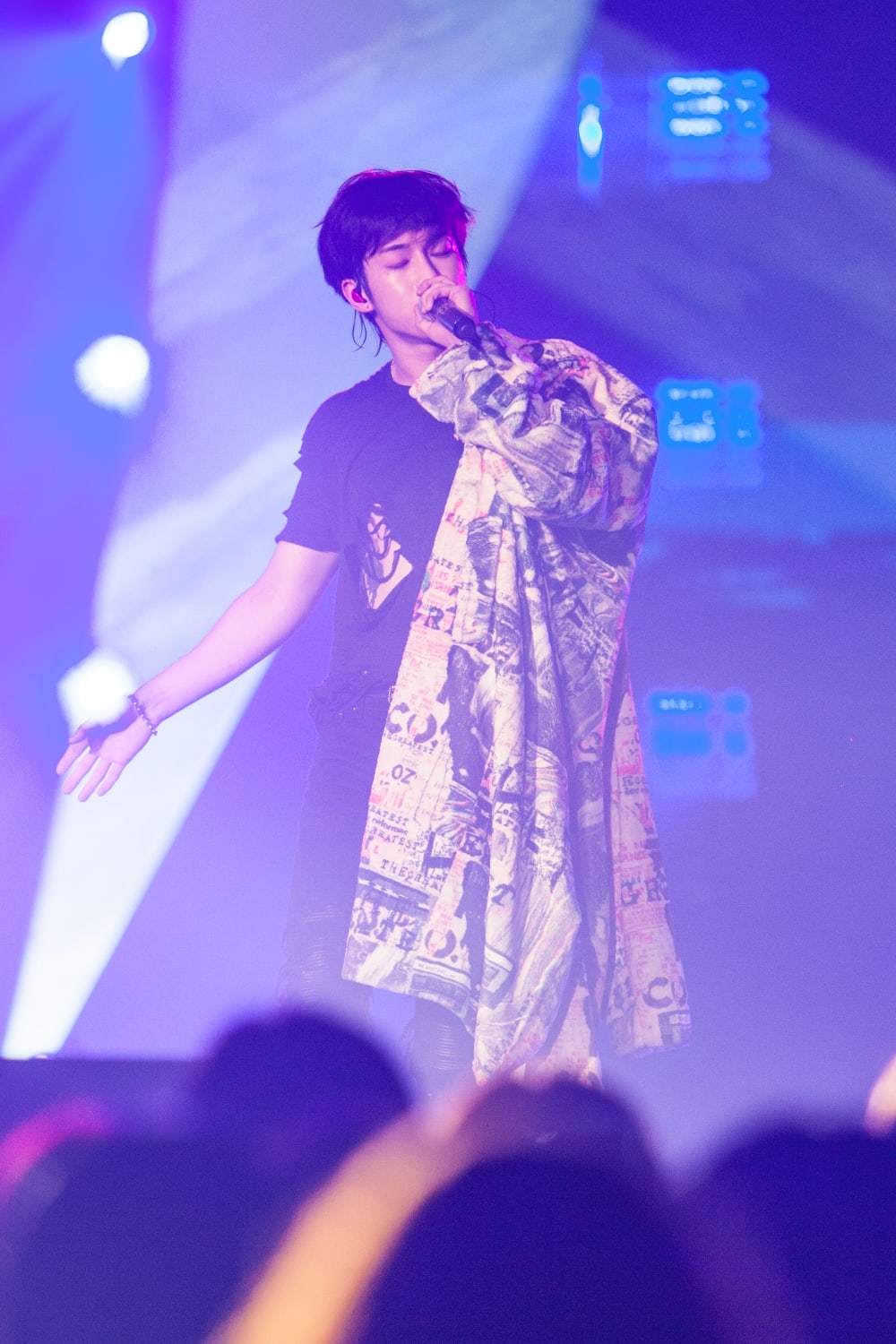 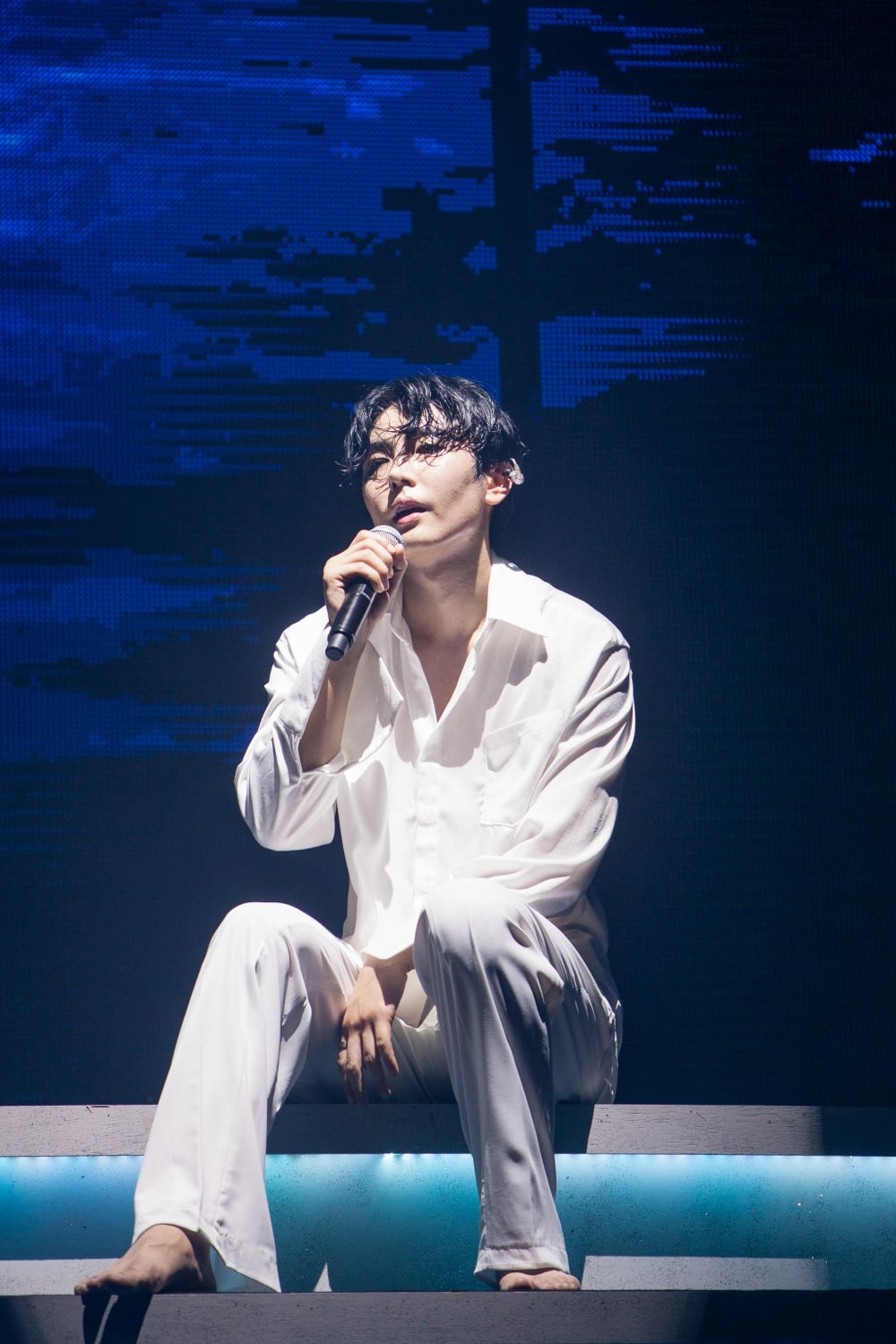 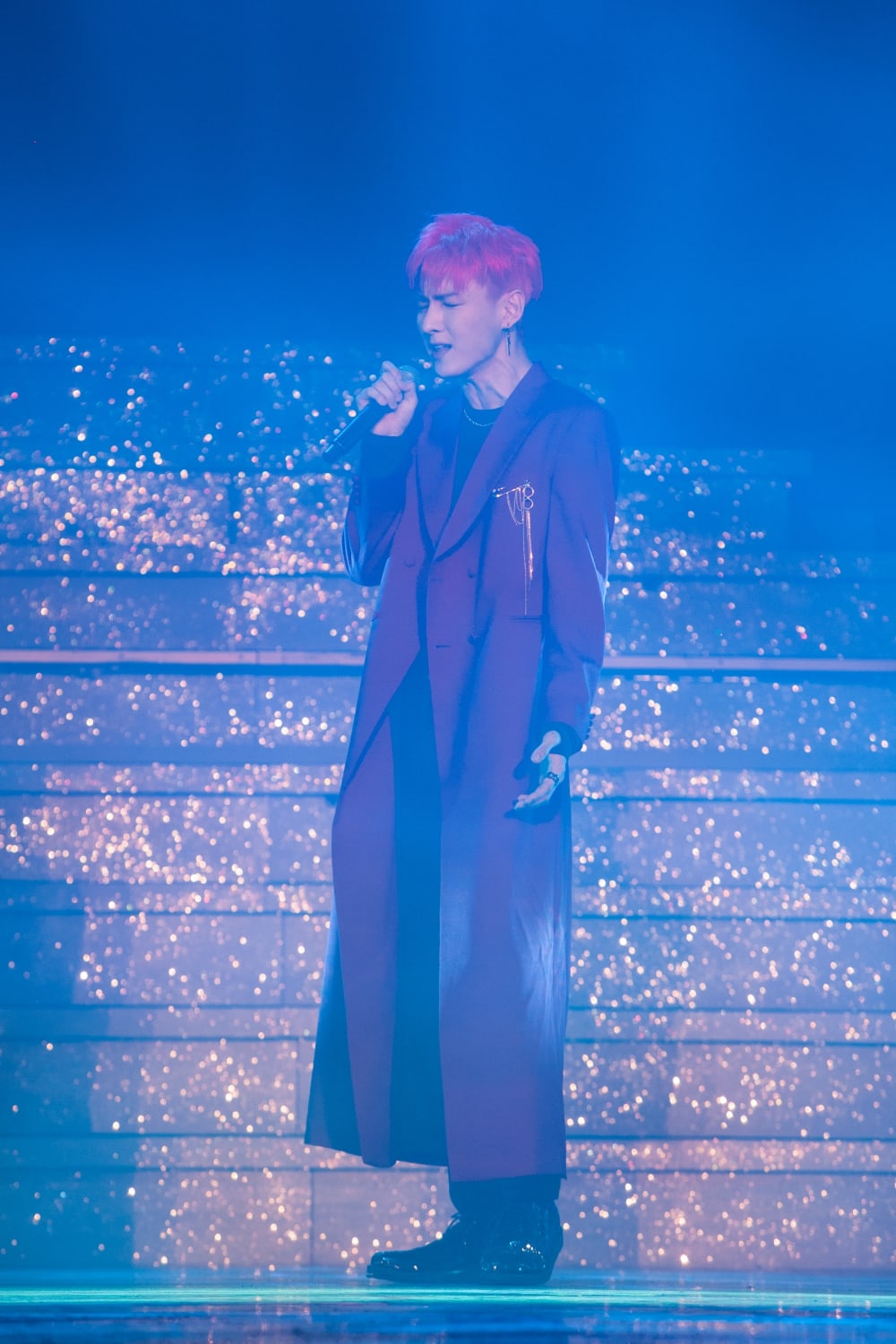 All the members then returned to the stage to perform “Midnight Road” and “Enough” with a dance break. They talked about centering their theme around the concept of “Universe,” and talked about things that they associated with it. Jaeyoon said, “Of course, the thing that we think of most is our star-like FANTASYs [official fan club name],” and Dawon added, “Seeing FANTASYs holding the light sticks from behind the stage right when the concert was starting, it really looked like a night sky full of stars and it was beautiful.”

As they shared their stories, the members went from their pristine white uniforms to a cuter marine look, explaining how they had prepared both because they knew fans loved it. They got one step closer to fans as they moved to the extended stage to perform “Round and Round,” “Let’s Hang Out,” “Mamma Mia,” and “Photograph.” 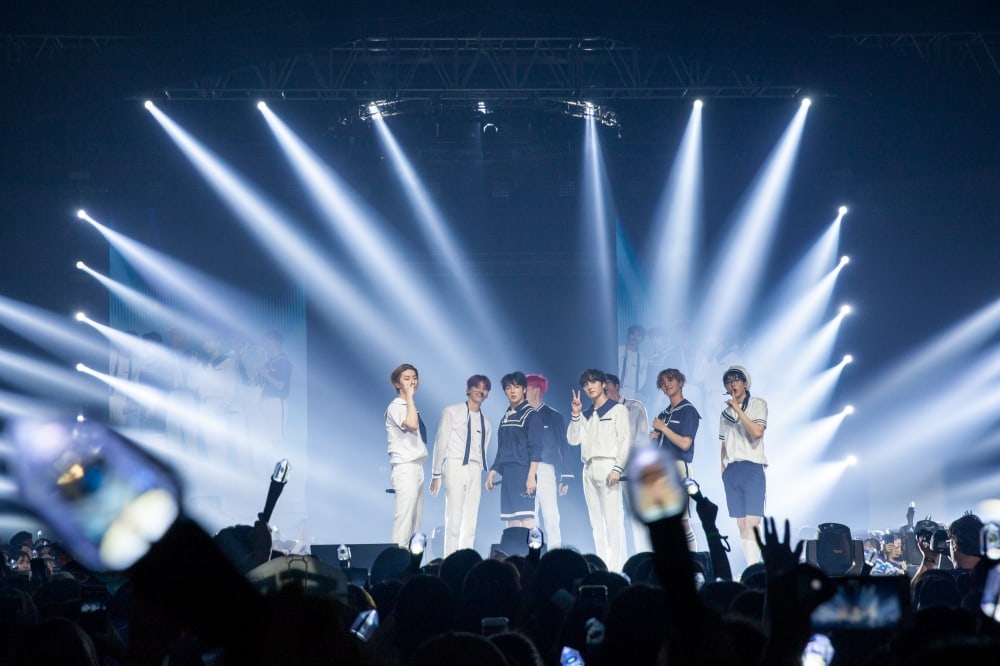 Next were more solo performances, beginning with Rowoon’s sweet rendition of Sam Kim’s “That Summer Night.” Hwiyoung performed “Snow,” a song he wrote the lyrics for and composed the top line of. Both Taeyang and Chani performed songs Zuho composed and wrote lyrics for, and they each showcased their talents as they created the choreography for their respective songs.

The members returned to the stage to perform “Dreamer” together. The atmosphere continued to buzz with excitement as the members enjoyed their time on stage, delighted fans with “Jungle Game” and “Play Hard.” 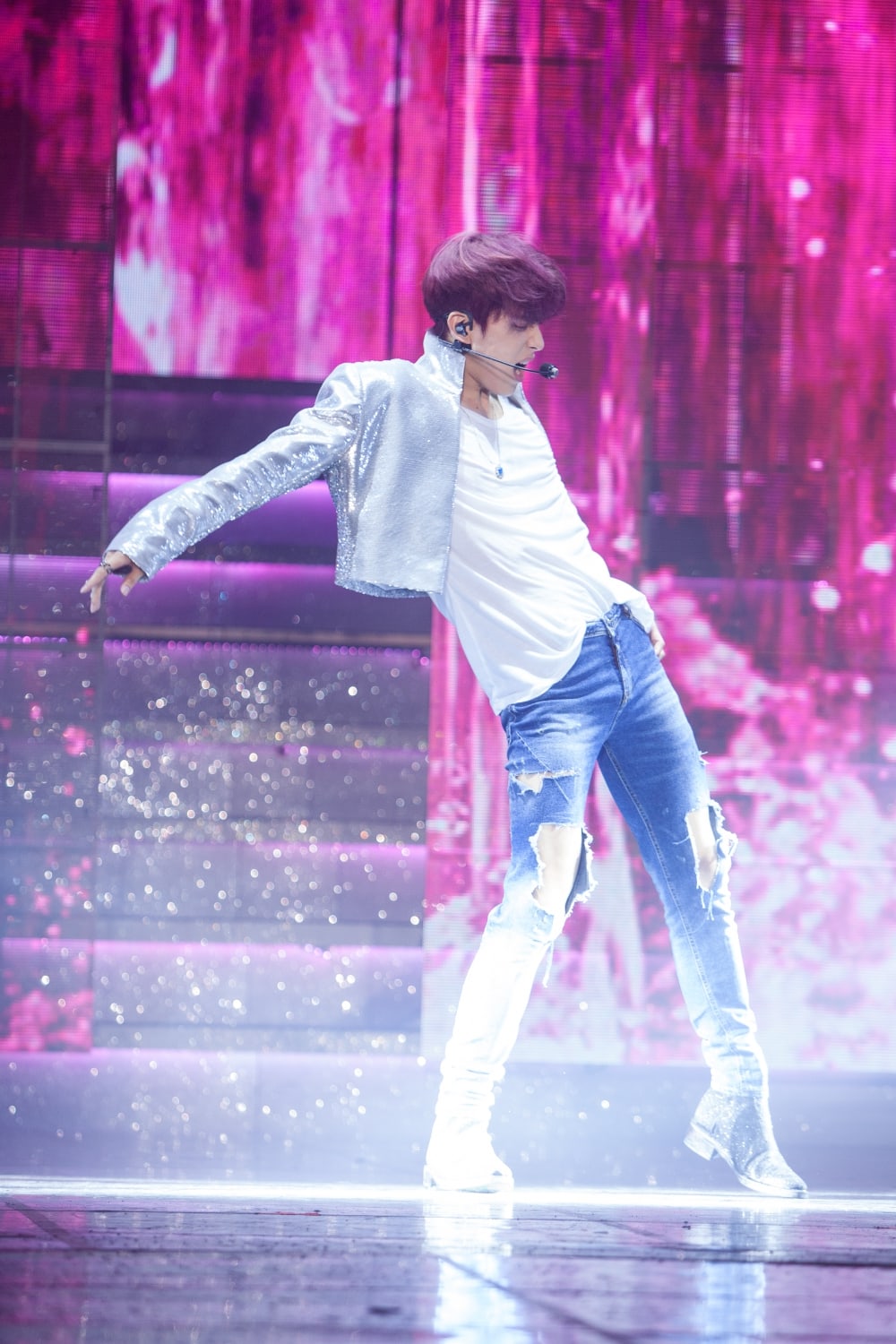 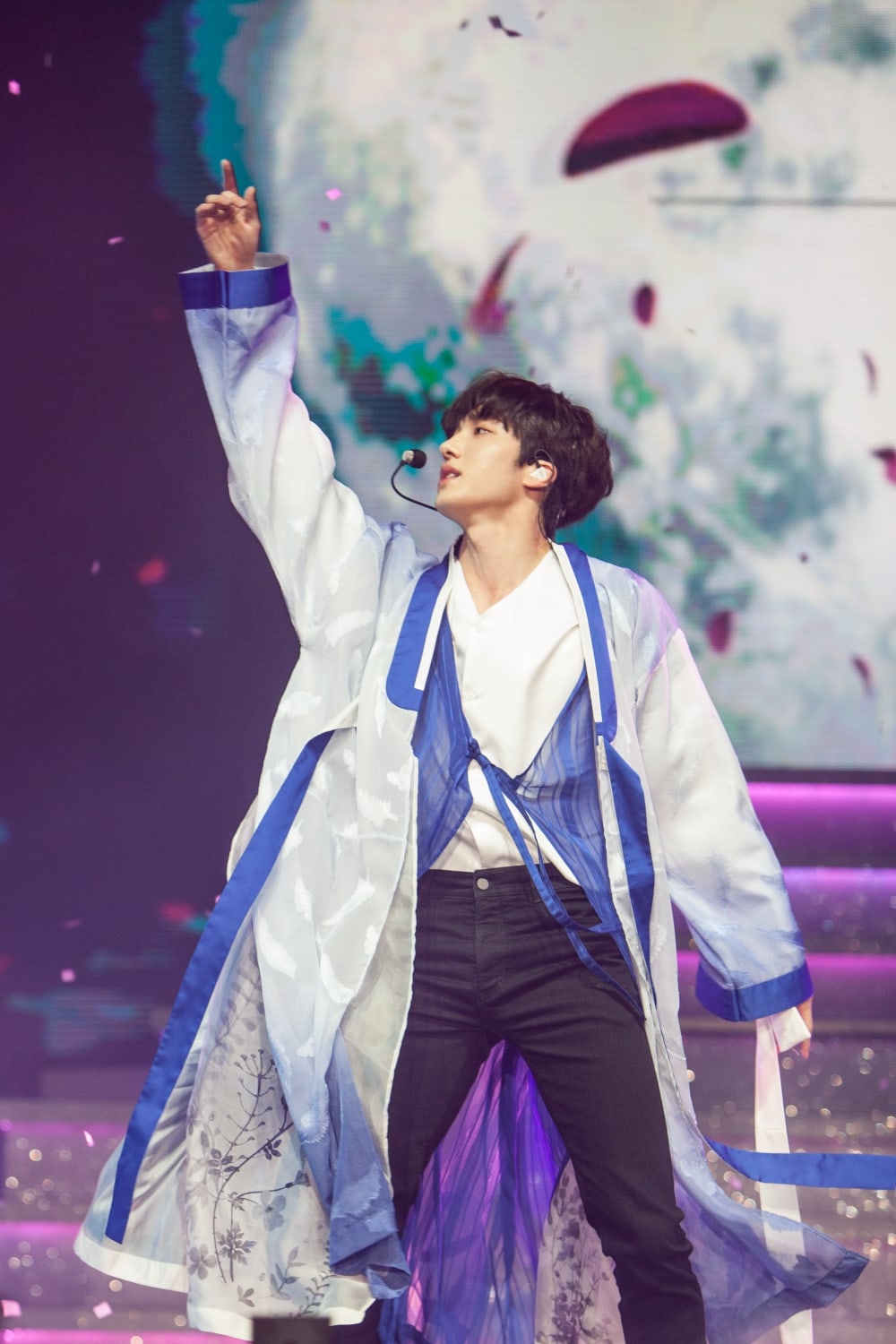 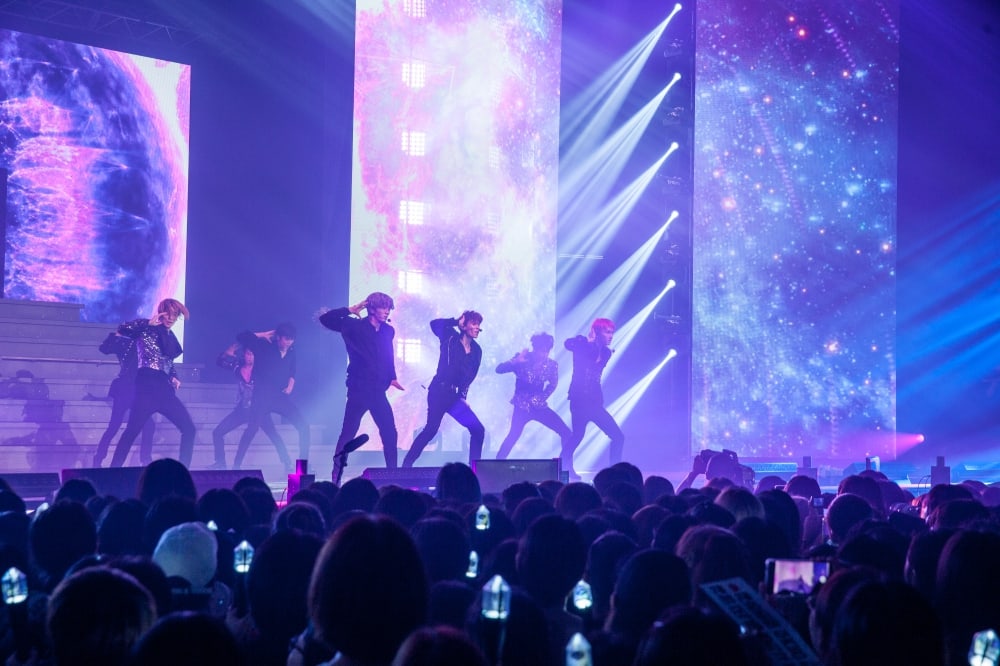 As the concert began to near its end, Rowoon opened up and said, “Preparing for my upcoming drama, I wasn’t able to participate in all activities, and I missed FANTASYs and I felt so sorry. I’m always doing my best so I hope you will all support us with the same heart. I will continue to work hard.” He continued, “We haven’t really taken a break since making our debut. But being able to meet like this and perform on stage makes me so happy. I hope we keep making memories together and grow old together. Thank you for today and I’ll continue to be thankful.”

With his beautiful words as a backdrop, the members performed “Unlimited,” “See U Tomorrow,” and “Life Is So Beautiful,” once more getting closer to fans and having fun with them. They returned for an encore, performing “The Beat Goes On” and “Echo.” 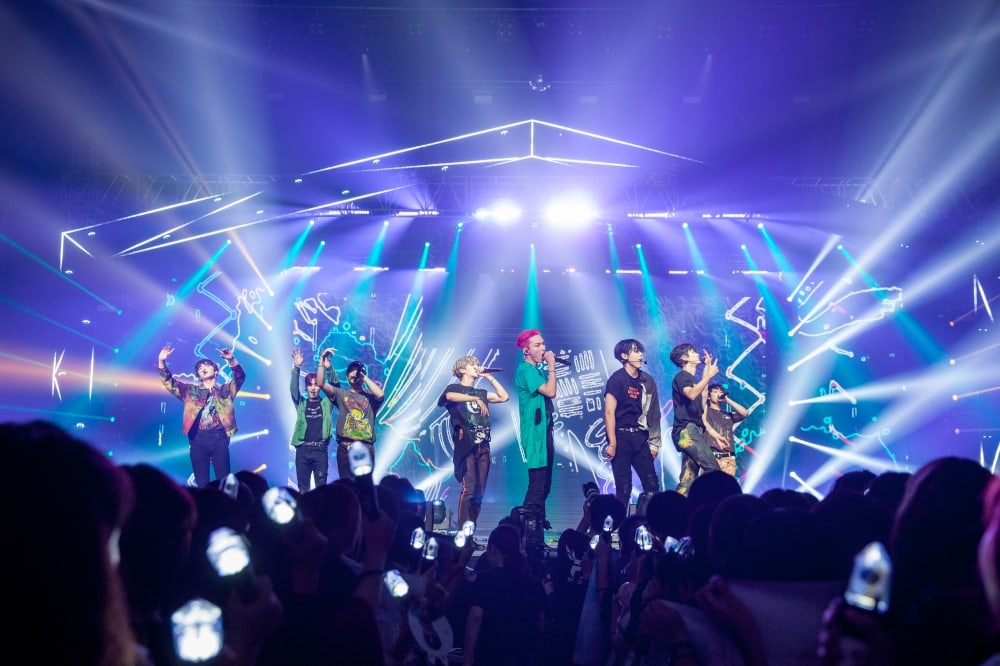 First, Jaeyooon said, “There are so many things that I want to say. There’s something I want to boast about, Youngbin and Taeyang created the choreography for ‘Echo,’ ‘See U Tomorrow,’ and ‘Dreamer’ despite being so busy. I really wanted to mention that. I wanted to show you a stage with all nine of us because we haven’t been able to do that in a while, but we did our best so I hope you enjoyed it. FANTASYs are always a miracle to us. When we first appeared, you might not have been able to see us but we could see you. We’ve never seen this many light sticks in one place before. Thank you for coming to our concert and we will do better so please keep supporting us. Your cheers were a source of strength today, thank you.”

Dawon followed by stating, “It wasn’t easy preparing for this concert because we didn’t have a lot of time. We should be here with Inseong but we can’t, and that was sad. We thought a lot about what we could do to show a good stage to make up for him not being here. We’ve never had this many Fantasies in one place before, and I worried, ‘Can we grow more? Is there a brighter future ahead for us?’ Thank you for waiting for us with such a great and amazing response.”

Chani expressed his gratitude to fans and lightened the mood by joking that he had gotten too heavy for the other members to lift and carry him during “Jungle Game,” and asked if fans still wanted to watch them perform it. When he got a resounding yes from the crowd, he smiled and said, “Okay, we’ll keep doing it then. That was something I really wanted to ask.”

Then, Hwiyoung said, “I’m so happy we were able to hold this concert. When promotional activities are over and I’m by myself, I always ask myself if I’m really doing well.” Hearing the fans’ responses, he went on to say, “I must be doing well. I think I have the same concerns as everyone else. I’m not good at expressing myself to others and sharing my concerns. But once I stand on stage, that seems to disappear a bit. The fact that you’re willing to share your time with me is so meaningful. I will continue to work hard and grow for you.”

Taeyang stated, “Through chance or by fate, we’ve met and are seeing each other in one space like this. To be honest, I don’t care if it’s chance or fate, what matters is that I just want you to be by my side. Because I will always be sincere to you, please believe me. I had so much fun being with you today. I love you.”

Zuho was next and he said, “I was trying to push my emotions down a lot during the encore. When I couldn’t participate in the ‘Enough’ activities, I thought I would never be able to stand on stage again. I was very weak back then. But my father, who is also here today, said to me, ‘If you’re going to hurt the people who love you, then give it all up’ and that woke me up. Seeing all of you having fun today made me strengthen my resolve again today. Personally, I have a little regret because I feel like I could have done better. I will continue to do better.”

Rowoon shared, “To be honest, I was a little worn out. There was a success that I had imagined and worked towards when I was younger, but when we didn’t reach the accomplishments I’d expected, the sense of loss I felt was immense. I felt sorry to the other members because I felt like I should have gotten our name out more in my other activities. I did feel a sense of pressure, and I felt bad about expressing that in front of you. But I feel like I’m being comforted in this space right now, and that makes me happy. I’m happy when I sing, dance and act. I want to put my focus on something other than that success so we can all be happy together. I hope we have a space next time where I can let go of my struggles like I did today.”

Finally, leader Youngbin said, “When the concert was confirmed, we were so grateful to the company. In the middle, I thought it would be impossible so there were moments when I wanted to give up. But I felt like I couldn’t give up as the leader. Preparing for this concert was very hard but the members did well so I’m grateful to them and a little sorry that I nagged at them along the way out of greed of wanting to create a better concert. We prepared as much as we could, we have to make sure we can see each other again but I’m a little worried.”

With that, he introduced the very last song of the concert called “Beautiful Light,” a song with lyrics written by the nine members as they thought of FANTASY holding light sticks and cheering for them.

Just before the song started, the members were met with a surprise guest. Inseong walked on stage with a cake and letter. The cake had two candles for Rowoon and Jaeyoon, and Inseong also explained how the candles were also to signify how this was their second concert in Korea. Inseong said that even people in their agency hadn’t known he was coming, and he had wanted to surprise the members and show this support. He wrote a short letter, which read, “You’ve all worked hard preparing for the concert. I was sad I couldn’t be on stage with you, so I came secretly to see you. I hope this moment will become a stepping stone so we can create more happy memories together.”

Inseong decided to stick around for the last song so that all nine members could be on stage together as they wrapped up the concert. As the members walked around the extended stage to greet fans and perform “Beautiful Light,” leader Youngbin stayed beside Inseong, who was sitting in a chair in the middle of the main stage, throughout the whole song so he wouldn’t be by himself.

The concert ended with Youngbin’s words, “It is because of you [FANTASYs], that we are able to shine.”