The identity of contestant Idool was revealed on MBC’s “The King of Mask Singer”!

On the August 11 episode of the singing competition, several contestants faced off for the chance to become the “King of Mask Singer.” During the second battle of the first round, contestants Idol and Idool sang a duet version of Five Fingers’ “Balloons.” As they sang the popular track, the panelists provided different guesses for their identities.

Unfortunately, Idol was able to move onto the second round with a score of 56 to Idool’s 46, so Idool remained on stage to reveal his identity while singing Lee Seung Gi’s “Smile Boy.” 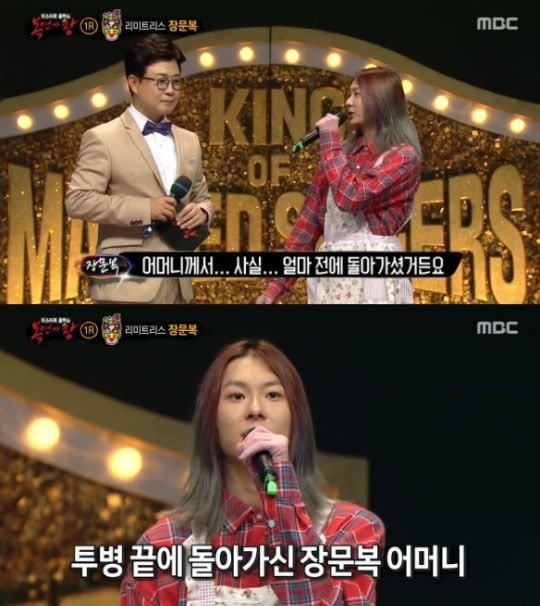 After revealing his identity, Jang Moon Bok commented, “I have a feminine image because my hair is pretty long. I don’t think I’ve really showed an image that’s truly me, so I wanted to display that.”

He also revealed the reason for why he appeared on “The King of Mask Singer,” saying, “My mother likes shows like this where people perform on stage. To be honest, my mother passed away a while ago, so I wanted to show this image of myself performing on stage to her. She had cancer for around two years before passing away. I’m positive that she’s looking down from the skies. She passed away a week after our debut was confirmed.”

Jang Moon Bok finally remarked, “From now on, I want to share greater music and receive love from many people.”

Check out a clip of his reveal below!

Jang Moon Bok
The King of Mask Singer
LIMITLESS
How does this article make you feel?