After weeks of getting to know and falling in love with our money-loving hotel owner Jang Man Wol (IU) and the “fragile” yet persistent human Goo Chan Sung (Yeo Jin Goo), we’ve entered the final stretch of this season’s buzziest (and utmost fashionable) drama “Hotel Del Luna.”

Before we inevitably dissolve into a puddle of tears because of whatever heartbreak is going to be thrown our way in the next episodes, let’s take the time to appreciate the things that make this drama extra magical. Yes, we’re talking about those gorgeously done CGI effects.

From a majestic tiger to the blossoming Moon Tree, here are 10 memorable and fantastical (and heart-breaking) CGI moments:

Warning: This list covers Episodes 1 to 12, so check out right away if you’re avoiding spoilers. Or ghouls.

1. When the guest house/hotel materializes

In its very first incarnation, Hotel Del Luna was merely a humble guest house made of wood. The scene shows wooden panels being flung into place and the guest house quickly takes shape around Man Wol. And with a “Harry Potter”-ish twinkly-sounding BGM, it gets us ready for the fantastical ride ahead.

Later — after a millennium to be exact — the guest house has flourished into a grand and extravagant-looking hotel that visually unfolds right before our very eyes.

I mean, seriously, the CGI tiger looks way more believable than this supposedly embalmed one. 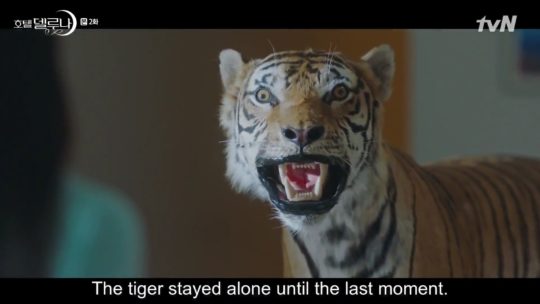 3. This glorious “shot” of outer space

We can’t help but chuckle at the whole fiasco with Man Wol trying to recruit her first and second choices to be the hotel’s manager (and seeing who those “recruits” are). But seeing this absolutely random, but nonetheless well-done CGI “shot” of outer space just takes the cake!

And the cherry on top? The fact that Man Wol is wearing a space suit. You can bet if Chan Sung were around then, he would be chuckling at the silliness of her in her space suit.

With Man Wol being linked to the Moon Tree, we knew it would not stay barren for long once Chan Sung came into her life.

And right on cue, the tree starts growing leaves once Chan Sung touches it…

… then when they hug and their relationship blossoms, so does the tree.

The protective force field is an added benefit! Gotta stay safe from the well-dressed but temperamental hotel owner!

When Man Wol goes to her hotel’s poolside (which is actually a beach), she finds the sun too glaring, so she calls maintenance and asks to “turn the sun down” and adjust the sky’s setting from noon to 6 in the evening. Now that’s certainly one neat trick!

When Man Wol invites you to her hotel, you can be sure you’ll end up there even if you don’t intend to. For this, Man Wol does a little hocus pocus on an invitation card and the words come alive, dancing their way into the GPS system and directing the car to the hotel.

Whoever said “words will never hurt” obviously did not account for these mystical letters.

7. When the water spirit makes a splashy entrance

When the water spirit (Nam Da Reum) arrives at Hotel Del Luna looking for a getaway, he sure leaves an impression on the kind Chan Sung who allows him in… by walking straight through him. And yes, the “splashy entrance” pun needed to be made and I don’t regret it at all. Splash away!

8. When Chan Sung embraces the hate

This is another visually poignant image where Chan Sung literally embraces the hate that Man Wol manifests. To this point, we’ve seen Man Wol being cheeky, feisty, and manipulative, but this is the first time we really see this vindictive and hatred-driven side of her and it is certainly unpleasant to watch.

In the end, sometimes all we need is a hug.

9. When the dark Ma Go “takes care” of the vengeful spirit

The dark Ma Go’s (Seo Yi Sook) mission is apparently to obliterate the evil spirits that actively try to harm humans. The first we see of this is when the vengeance-seeking spirit dissolves into embers as if she’s being incinerated. And as painful as it is to see her tragic story come to such an end…

… it is even more maddening to see that it is a future that possibly awaits our dear Man Wol too.

After psychopathic murderer Seol Ji Won (David Lee) commits suicide, he returns as a ghost, equipped with his very own protective shield that can hold its own even against Man Wol. The intangible and wispy shadows perfectly capture the idea that the shield is powered by hatred and darkness, and we can’t help but be worried about what this vengeful spirit has in store for Chan Sung.

Have you been keeping up with “Hotel Del Luna”? Which of their CGI effects caught your eye the most? And are you ready to melt into a puddle of tears? Head over to the comments and share!

Belinda_C‘s heart ached when she learned the truth about that firefly that was always fluttering around. Is there going to be a spirit-human-firefly love triangle?! Talk “Hotel Del Luna” and SEVENTEEN with her on Twitter!