“Secret” will be a drama that tells the story of people with realistic ambitions who gather in a space called “forest” with unhappy memories and scars to heal together and find the true meaning of happiness. The drama is expected to bring a deeply touching and humane story of people healing through each other amidst their complicated and tiring lives. Park Hae Jin will star in the drama alongside Jo Bo Ah.

Park Hae Jin will be taking on the role of a former M&A (mergers-and-acquisitions) hotshot who becomes a special rescue task force member and dedicates his life to saving others. He begins as the director of RLI Investment and an M&A star, seen as the perfect man for his stunning visuals, animal instinct, and intellect, but he is also someone who lives having lost the memories of his childhood. 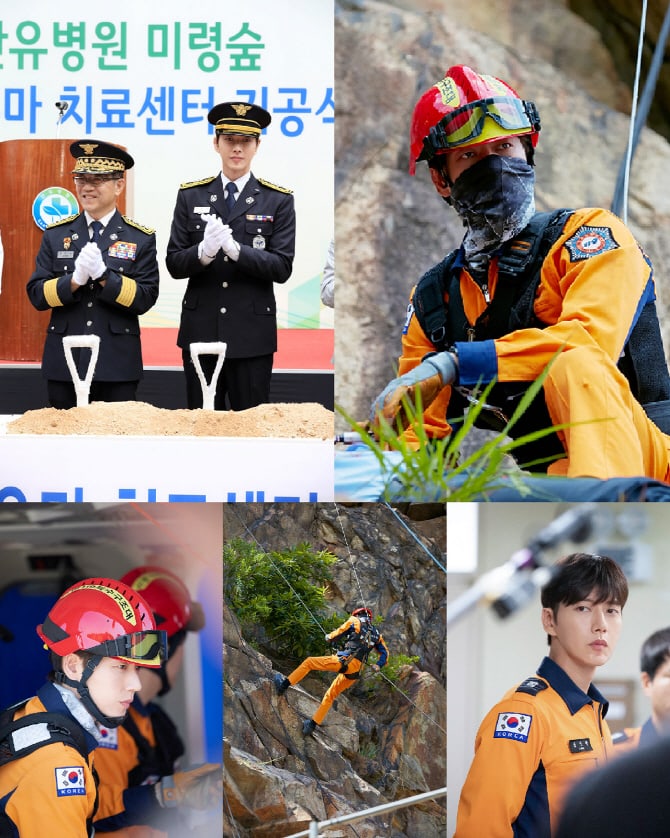 Filming first began on March 8 in Gangwon Province, and has now wrapped up in late August. The last filming schedule was attended by Jung Moon Ho, the director-general of the National Fire Agency, and Kim Choong Shik, the head of the provincial fire department. As the drama aims to show a realistic and honest portrayal of firefighters, the National Fire Agency has been giving the production its full support.

Park Hae Jin himself has a personal connection with the fire department, being named an honorary firefighter last November for his various donations and volunteer work to help support firefighters. He is said to have received high praise from the staff on set as he stepped up to do his own stunts, such as securing a rope around himself and climbing up rocks, to give a realistic portrayal of a firefighter.

The actor stated, “Filming took approximately six months, and we were able to wrap things up without any accidents or injuries. I want to sincerely thank all of the cast, staff, and fans who have sent their unending support,” and “This project would have been impossible without the help of the National Fire Agency. I want to thank the director-general and all those from the fire department for their help.”

Now the filming for the drama has wrapped up, Park Hae Jin is set to hold fan meetings, participate in events for endorsements, and continue his work to advocate for firefighters.