Sunmi dished on her love life and her approach to dating on MBC’s “Radio Star”!

On the latest episode of the variety show, host Ahn Young Mi mentioned that Sunmi was famous for decisively shutting down romantic overtures from other celebrities. When asked about her reputation for firmly rejecting such advances, Sunmi laughed shyly, and host Yoon Jong Shin commented, “You get a lot of calls [from interested celebrities], right?”

Sunmi replied, “There have been instances like that, and in those cases, I change my number.” As the MCs expressed surprise, she went on, “Also, people around me often ask, ‘So-and-so asked me for your number. Can I give it to him?’ and I’ll say no. That means I’ve rejected him, but then I’ll hear from someone else, ‘[The same guy] asked me for your number. What should I do?'” 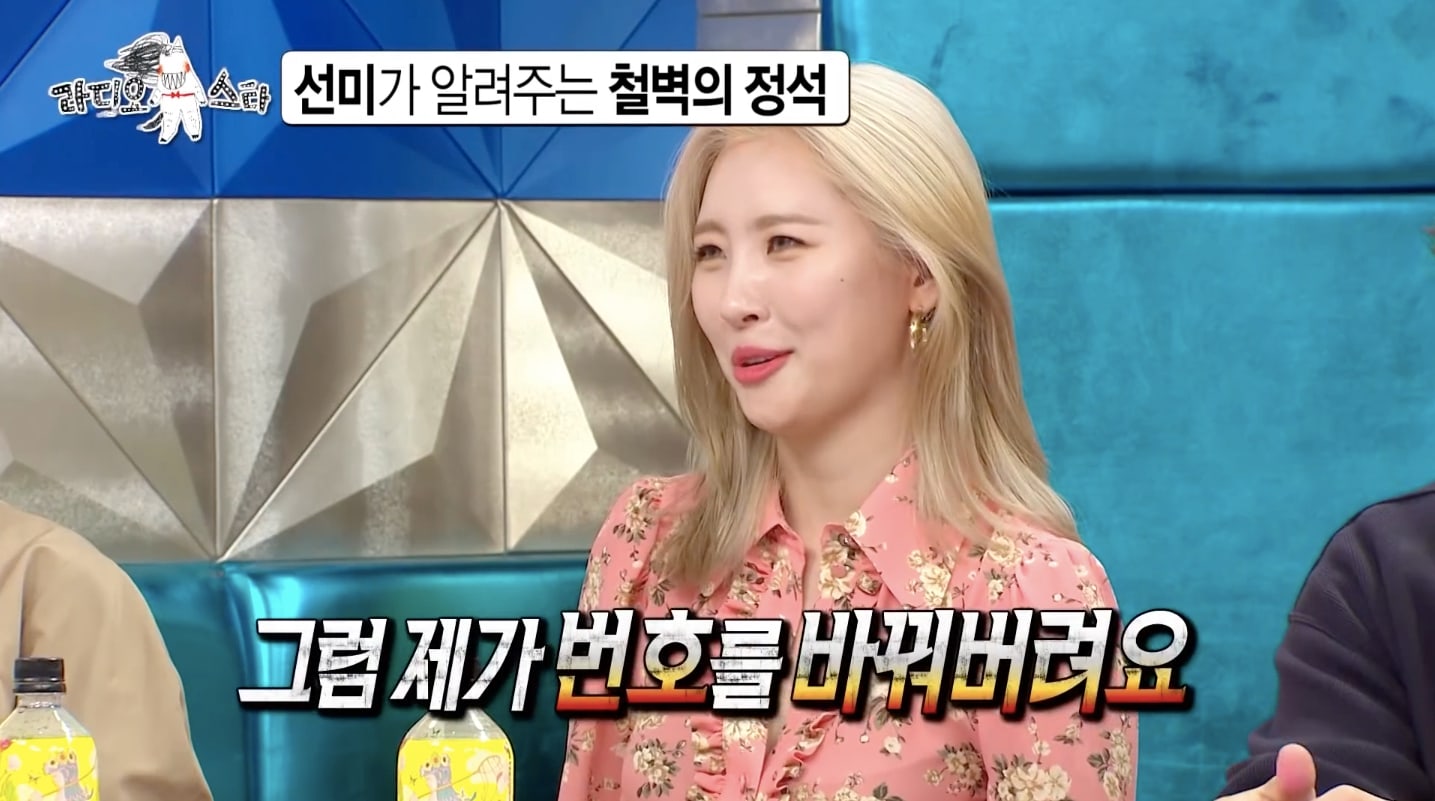 Sunmi continued, “These days, I’ve been getting DMs on Instagram. I typically don’t respond to messages [on social media], but there are people who keep sending me messages on a regular basis. To be honest, those kinds of people scare me a little, so I block them. And [if I receive calls,] I’ll change my number.”

The singer went on to explain, “If I like someone, I’m the type of person who’ll approach that person first and start up a conversation. I also tend to have very long-term relationships, so I don’t start dating people all that easily.”

Yoon Jong Shin remarked that it seemed like Sunmi’s approach to dating would make it difficult to meet people, and Sunmi agreed. Ahn Young Mi asked, “Does that make it [difficult] for you when writing lyrics?”

Sunmi replied, “Actually, I kind of obsessively avoid using the word ‘love’ when I’m writing lyrics. Almost all of my lyrics are about myself.” Ahn Young Mi jokingly responded with a wink, “If you ever put the word ‘love’ in your lyrics, then I’ll know you have someone.” 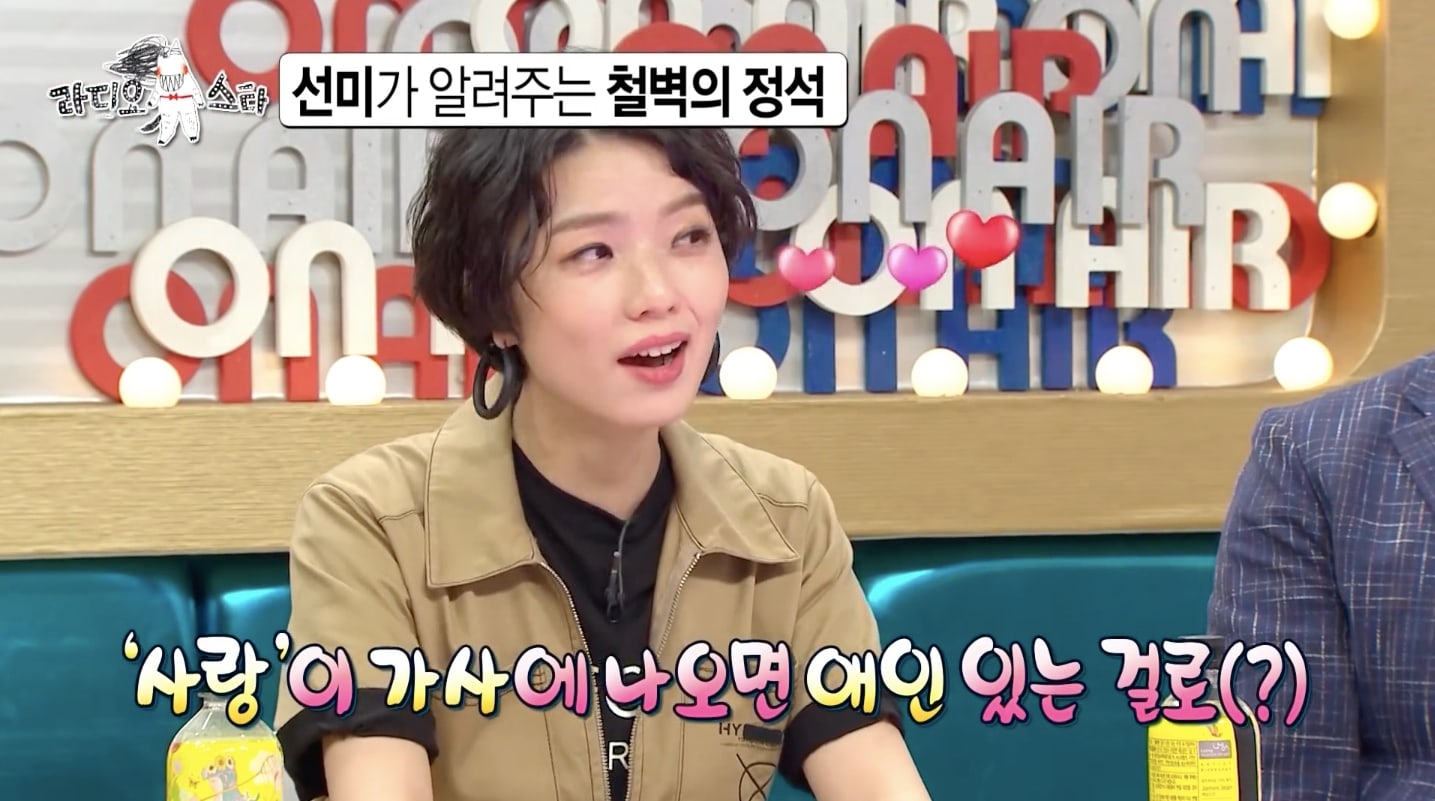 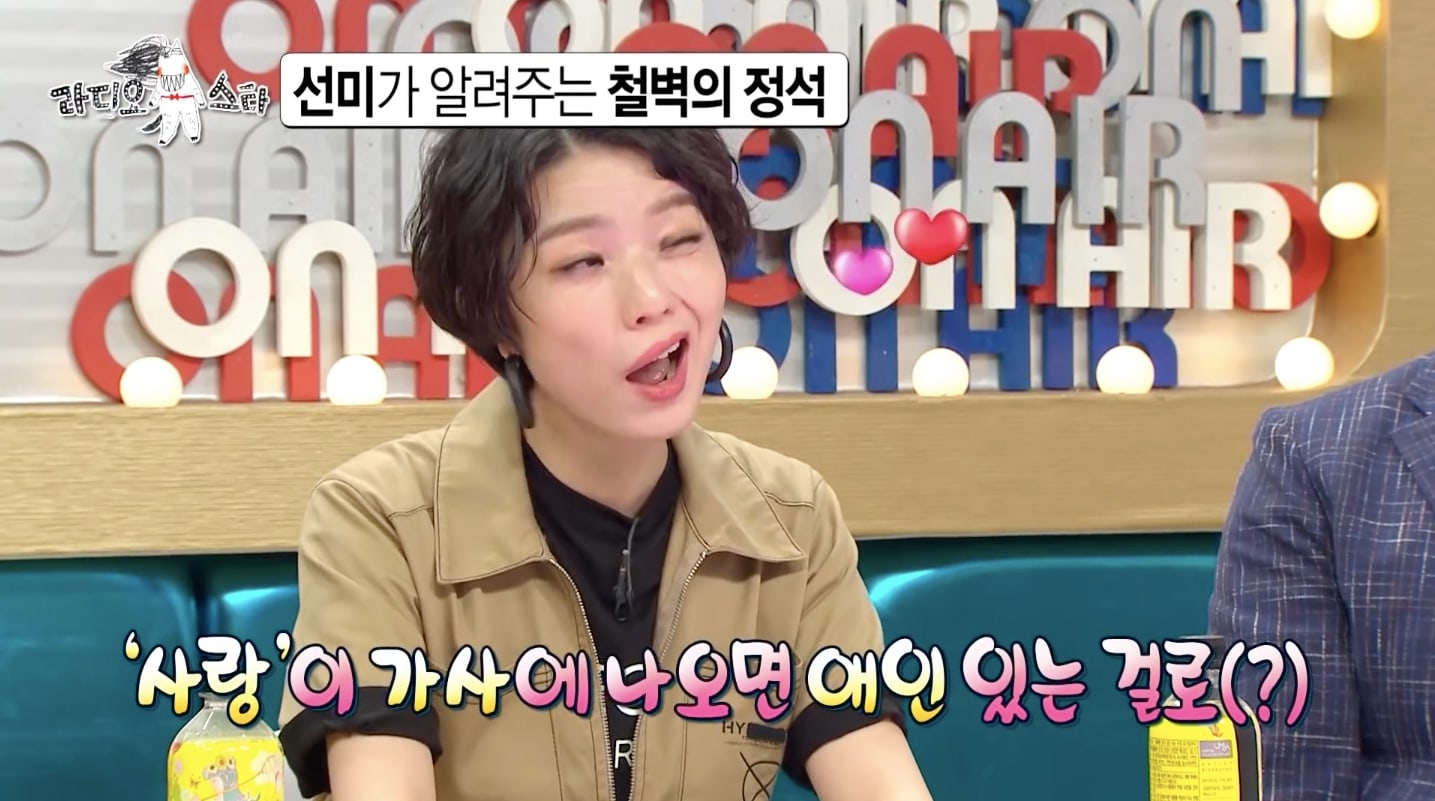 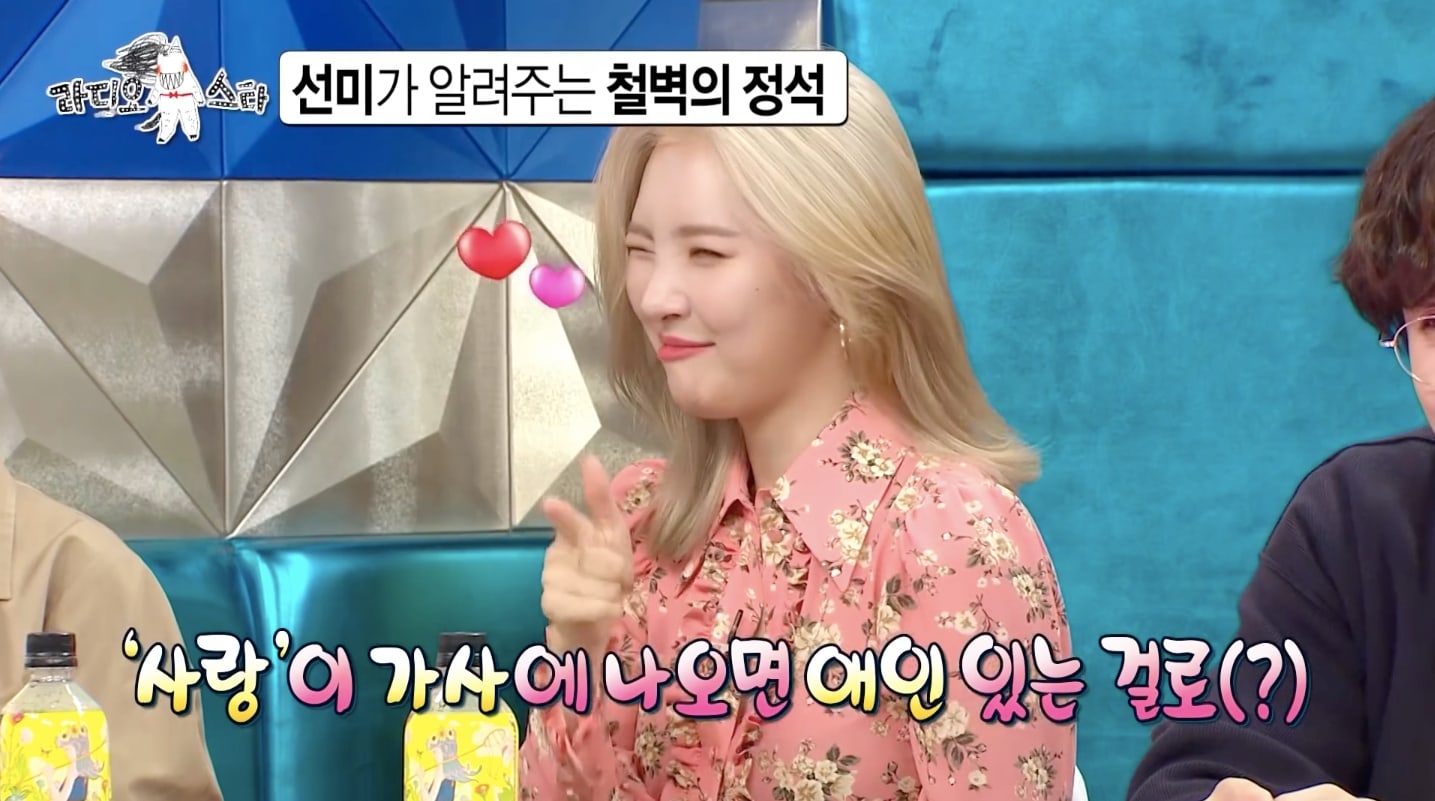 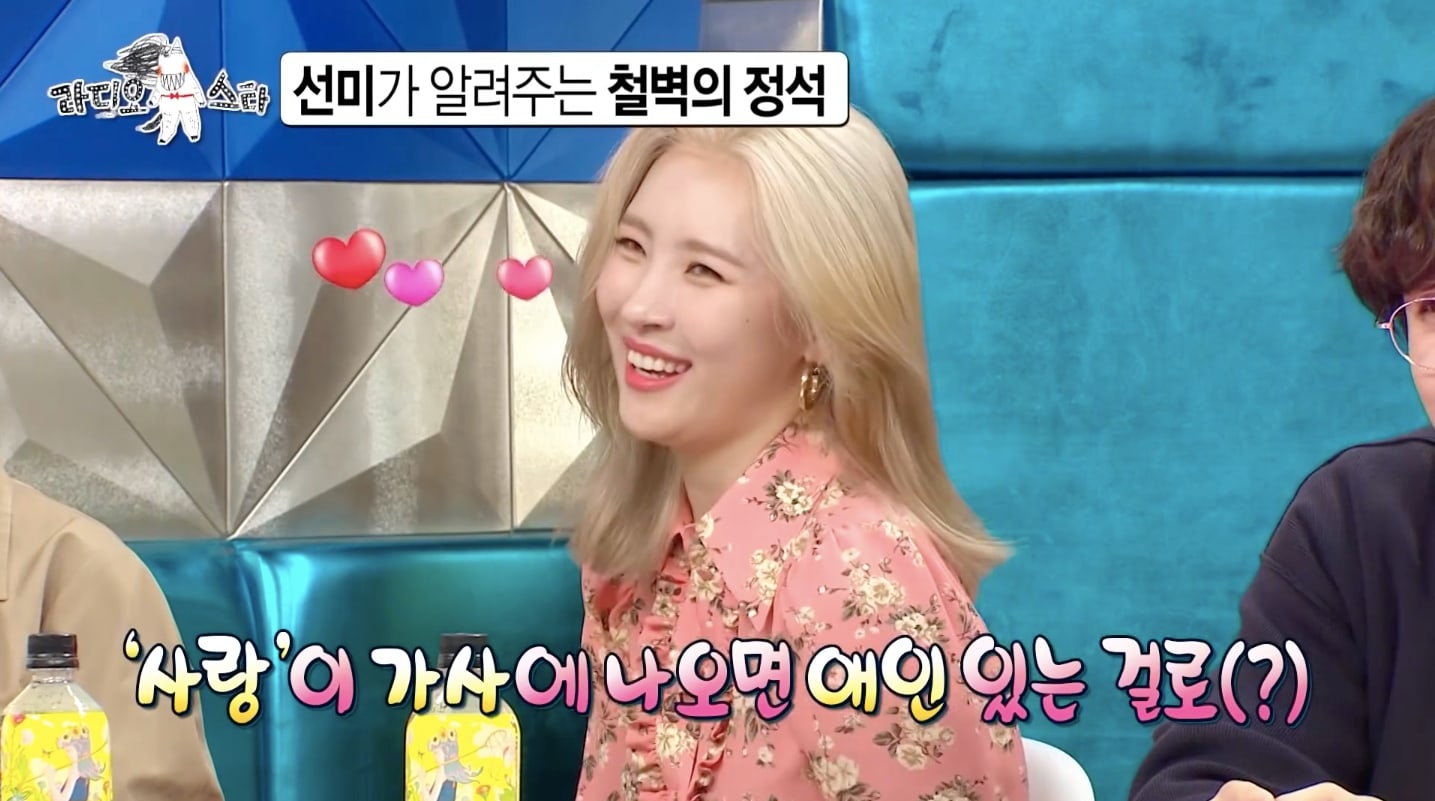 Watch the full episode of “Radio Star” with English subtitles below!

Radio Star
Sunmi
How does this article make you feel?