BTS‘s variety show co-stars and other celebs shared their thoughts as they looked back on some of the group’s unforgettable TV moments!

On September 10, SBS aired a Chuseok special titled “BTS Variety Chronicles,” which featured a ranking of the best of BTS’s scenes on SBS variety shows over the years.

One of BTS’s variety show appearances that was spotlighted in the special was Jin‘s adventure on the survival reality show “Law of the Jungle.” His fellow travelers Solbi and Sleepy appeared on the show to watch clips and share comments.

Sleepy mentioned how Jin looked handsome even in the jungle and Solbi said, “Jin is really cheerful and friendly too.” She also talked about how after spending a lot of time swimming, Jin experienced symptoms of exhaustion. “When he was having a hard time I took care of him, I gave him water while he was lying down,” she said.

“Jin asked me, ‘Have you ever taken care of a sick person before?'” she continued. “When I said no, he said, ‘Please don’t try to take care of a sick person again.'” Solbi laughed as she told the story and the caption explained, “It’s not a good idea to give water to someone who is lying down.”

“He was very grateful though,” she said. “I have a lot of memories from then.” 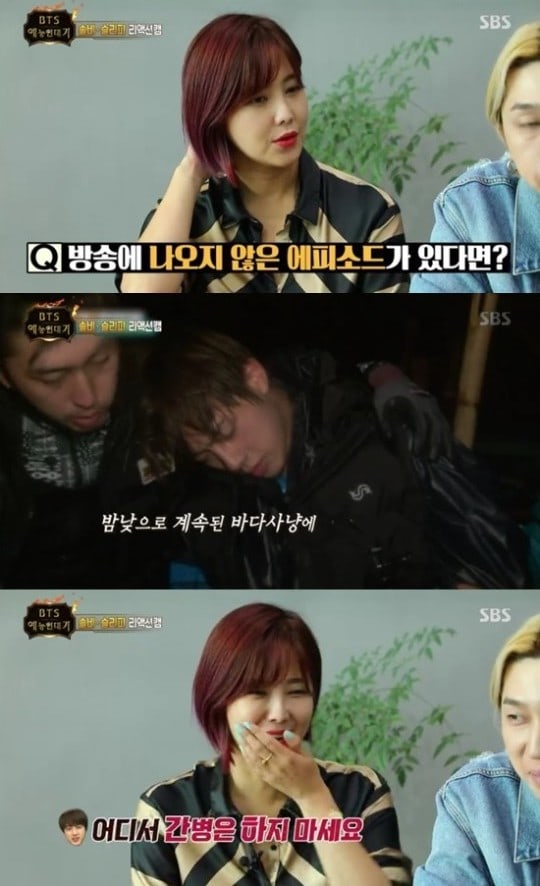 Singer Zion.T was also shown a clip of Jungkook doing an impression of him on a 2016 lunar new year special titled “The Boss Is Watching,” in which he sang Zion.T’s “Yanghwa BRDG.” Zion.T pointed out that Jungkook seemed to sing “taxi driver” in the song as “sexy driver,” which may have been a play on Zion.T’s pronunciation.

After watching, Zion.T said while laughing, “I enjoyed hearing the ‘sexy driver.’ He was singing and then suddenly stopped and said ‘Oh!’ I’m so curious about why he did that. Actually that part was pretty funny! Thank you to Jungkook for singing my song.” 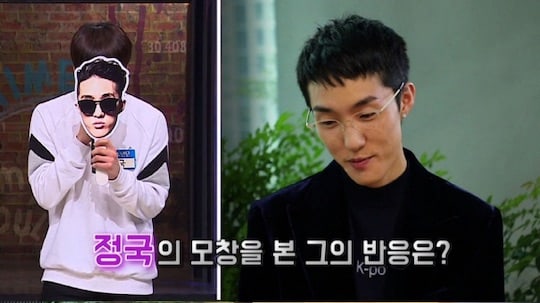 The No. 1 scene chosen by the show was BTS’s appearance on “Running Man” in 2016. SBS invited the cast members of “Running Man” to watch the scene and share their thoughts.

One of the most memorable parts of BTS’s game with the cast members was when Kim Jong Kook was holding down Jungkook with one hand and Suga with another, while Jimin held back Lee Kwang Soo by jumping on his back.

As they watched the clip, Kim Jong Kook took issue with the editing of the show, which showed fire effects on him during the scene of him wrestling the two BTS members to the ground. “I wasn’t angry,” he clarified. “Why did they put the fire through CGI? I was showing [BTS’s] back for the ARMY.” 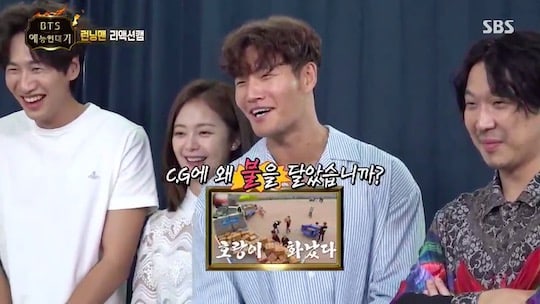 He also joked, “I wonder if this came in first place partially because I showed Jungkook’s abs.” Lee Kwang Soo also hinted at his hopes that BTS will return as he said he could still feel how it felt to have Jimin touching him and added, “I want to feel that warmth again,” making the others laugh. 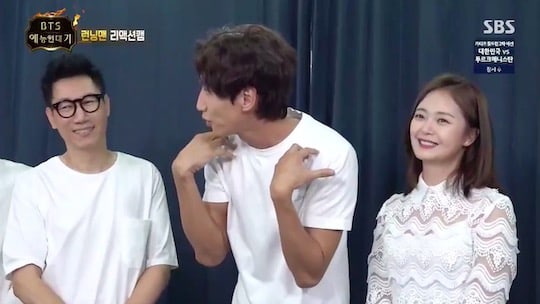 The “Running Man” cast was surprised to receive a Korean beef set for coming in first, and they asked “Shouldn’t BTS be getting this?” They then wished everyone a happy Chuseok holiday. 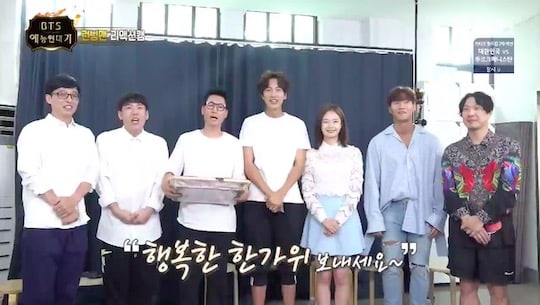