SuperM Chooses A Leader, Dishes On Their 1st Impressions Of One Another, And More

SM Entertainment’s new boy group SuperM took to Instagram Live to announce their leader and chat with fans ahead of their debut!

On September 11, the seven members of SuperM—SHINee’s Taemin, EXO’s Baekhyun and Kai, and NCT’s Taeyong, Mark, Ten, and Lucas—sat down for a live broadcast to answer some of their fans’ questions.

One of the first questions was how the members had felt when they’d first heard the idea for SuperM: a group that will focus on overseas promotions and is composed of members from different SM groups.

Taemin revealed that though it had only been formally announced in recent months, he had been aware of the idea of SuperM for a long time. “I’d heard a lot about the project,” he said, “and I prepared a lot. I felt really determined to do a good job, and I think I was also a little nervous because I would be working together with such cool and talented members. I thought a lot about it.”

“I also felt like I was debuting again, making a fresh start,” continued Taemin. “And so I wanted to create great teamwork within our group. Of course, each of us has our own groups—NCT, EXO, SHINee, WayV—but I wanted us to have good teamwork outside of that.”

“As for when I first heard the name SuperM…” said Taemin, before trailing off and laughing. He then cracked everyone up by concluding uncertainly, “I… really liked it.” 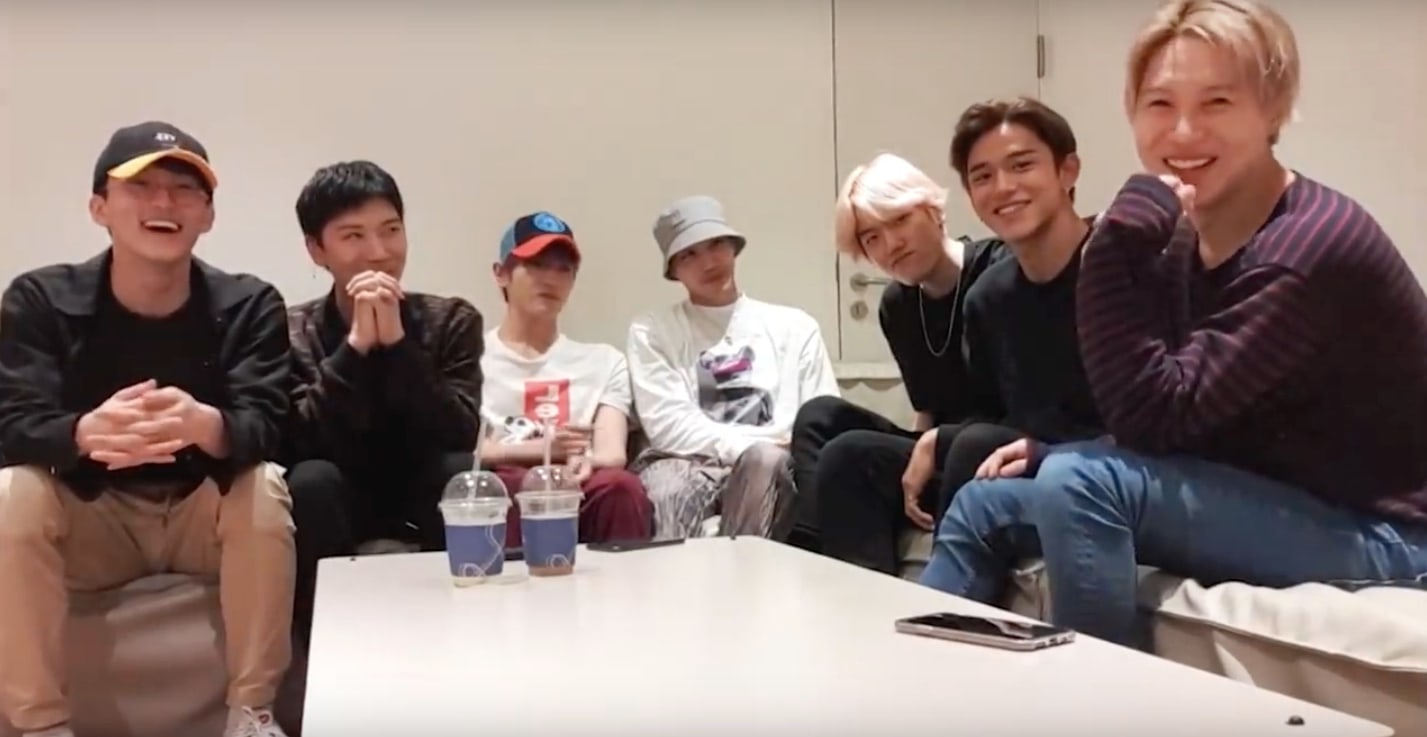 He added, “It may be hard [for our fans], but since we’re all working hard, I hope you’ll all look forward to it.”

Kai agreed, “I hope our fans like it too, and I hope they enjoy it. Since we’re debuting as a group anyway, and we’re going to show you cool things, I hope they enjoy watching us without feeling stressed about other things.”

Later on, Taemin also remarked, “I wanted to say this. I think some fans have been misunderstanding. There are some people who think that we won’t be pursuing our own individual activities in our own groups aside from [SuperM]. We’ll still be doing all of that in addition to this. You don’t have to worry so much.” 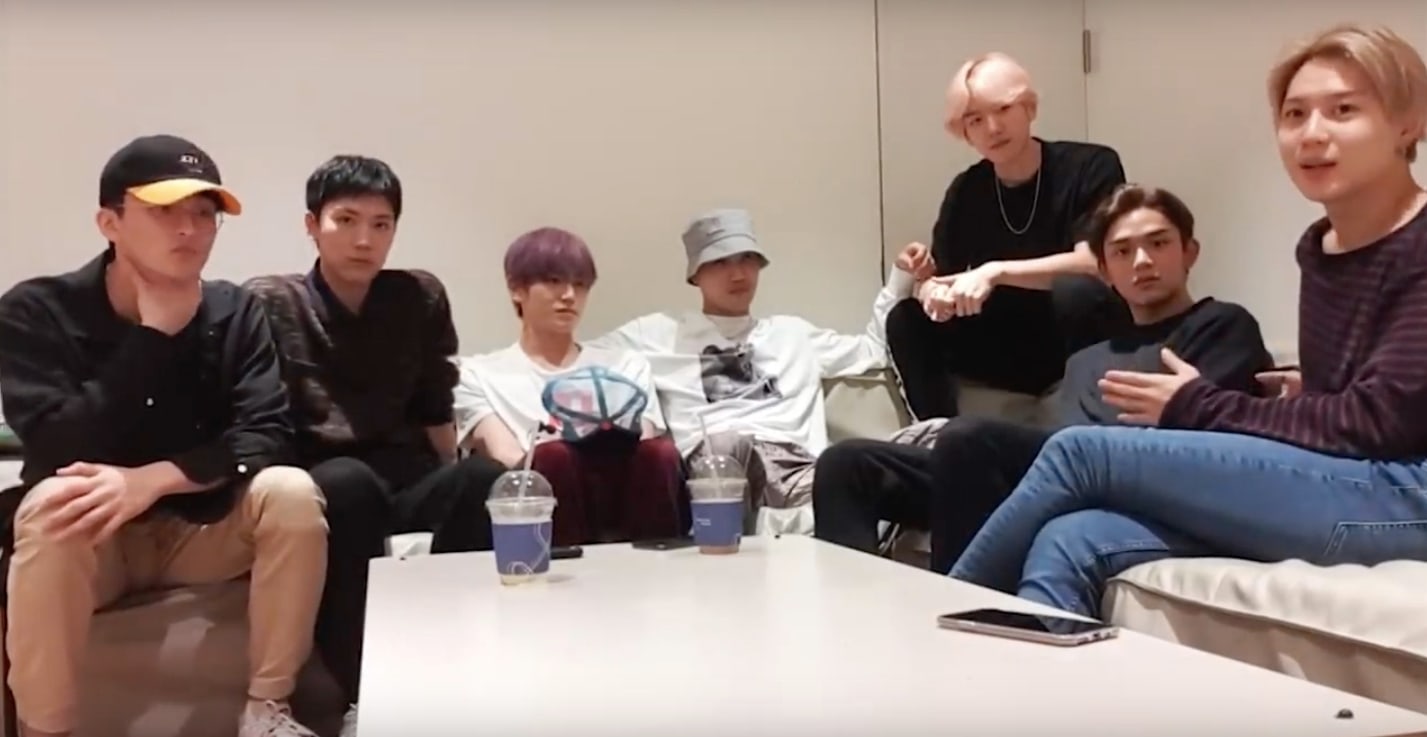 At another point in the broadcast, Baekhyun brought up the choreography for their debut track, remarking, “I think many people will be curious about whether the dance ‘goes hard’ or not.” He jokingly went on, “To give you all a bit of a spoiler, the entire song, from start to finish… is a dance break.” Kai chimed in, “I get out of breath from the beginning.”

Baekhyun continued with a laugh, “It’s like performing a dance break from a year-end award ceremony, except it’s over four minutes long.” Ten added, “Our choreography is really cool,” and Kai agreed, “You can safely look forward to it.”

Each of the members then took turns answering the question, “Which of the SuperM members turned out to be the most different from your first impression of him?”

Baekhyun immediately replied, “For me, it’s Lucas. I didn’t know Lucas was this cute. To be honest, I hadn’t seen much of Lucas. I’d seen a lot of Ten and Mark and Taeyong, but I had barely ever run into Lucas. So when I saw him, I thought he was really good-looking, and he had such a deep voice… but he turned out to be so cute.” He teasingly added, “He’s also starting to get ambitious about high notes these days.”

Mark laughed, “He’s been [getting into] high note battles with Baekhyun,” and Baekhyun commented, “I think Lucas will probably end up stealing my parts soon.” 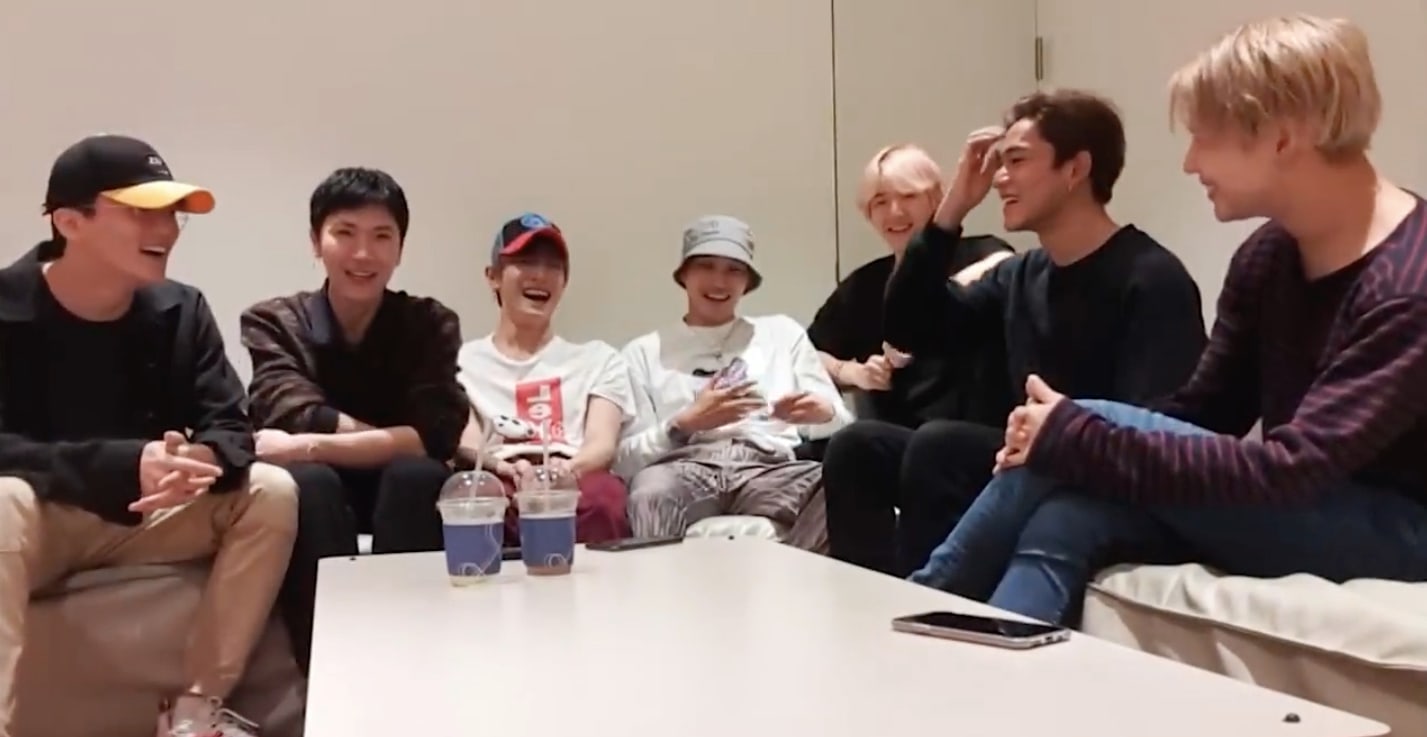 Up next was Mark, who revealed, “Honestly, I was the most surprised by Kai.” Baekhyun and Taemin jumped at the opportunity to tease Kai, with Baekhyun joking, “When you first see [Kai], you think… oh, that person… that person seems like I definitely shouldn’t try to get to know him.” Taemin playfully cut in, “What if it’s not that? [What if Mark’s saying] he thought Kai was nice, but then he was actually…”

Mark went on to explain, “No, no, it’s not that. On the outside, if you look at Kai’s appearance, he seems hard to approach. But he was very friendly, so I was grateful. This is kind of embarrassing. But at the beginning, he was really hard to approach.”

Taeyong shared, “For me, it’s Baekhyun.” Kai asked with a laugh, “He was even more extra than you expected? It was beyond anything you’d imagined?” Baekhyun readily agreed, “I turned out to be even more out of control than you thought.”

Taeyong replied, “What you guys are saying is exactly right. I don’t think I’ve ever seen anyone this fun and chipper in my entire life.” Taemin then recalled a time when Baekhyun had made filming impossible because he kept cracking everyone up on set, and Kai pointed out, “EXO has been experiencing this for 8 years.”

Baekhyun defended himself by telling the other members, “I did it to make you laugh.” 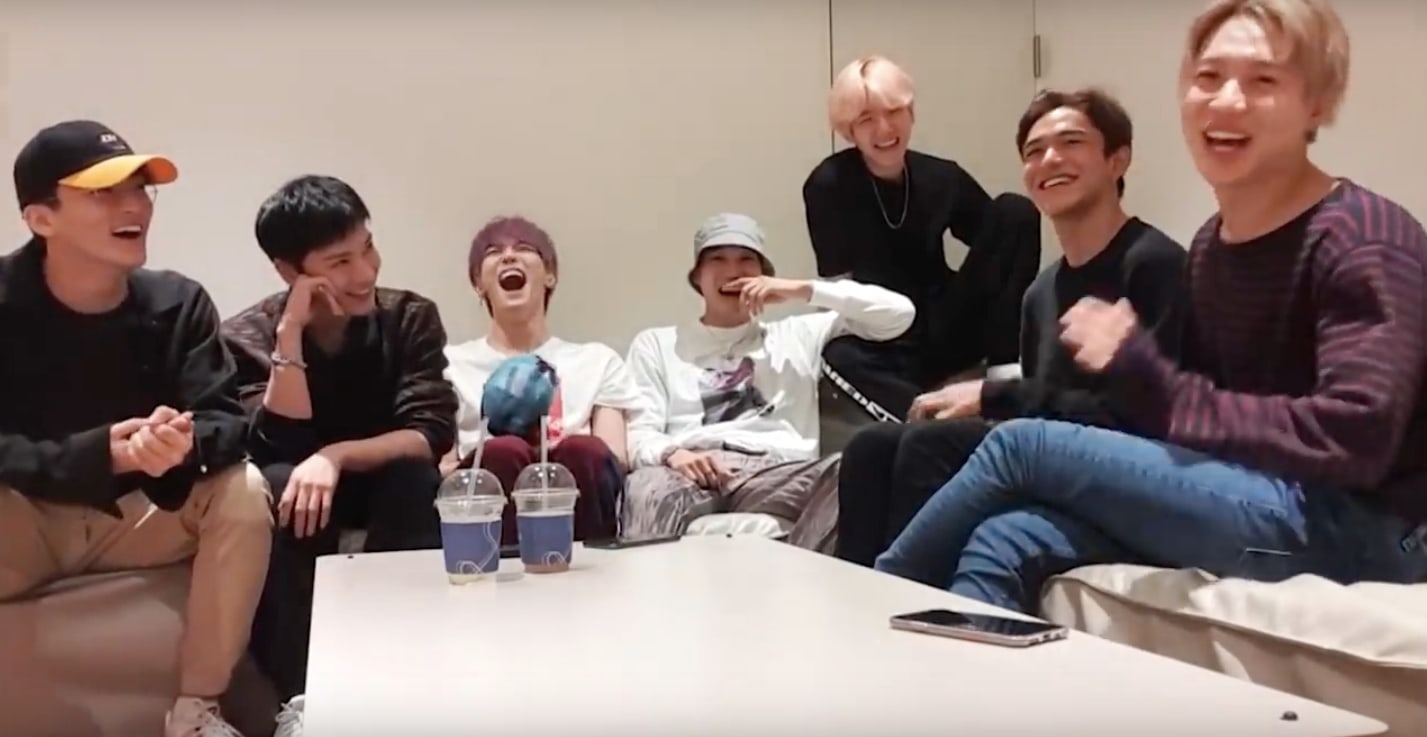 When asked for his answer, Lucas replied, “Honestly, all of the older members were like, ‘wow’ [for me], but…” Ten asked teasingly, “But…?” and Taemin cut in, “Can I tell this story? Because Lucas is so handsome, we keep telling him how good-looking and cool he is. Then one day, Lucas told me, ‘Hyung, you look so cool and handsome.’ So I said, ‘Oh, really? Then, Lucas, how about we trade faces for a day?’ and Lucas said, ‘Oh, no.'”

After all the members were done cracking up, Ten shared his own reply. “The older members [who aren’t in NCT] always looked cool when you were performing on stage, and I looked up to you,” he said. “So when we were practicing together this time, I was really surprised. You were so fun and funny, and you kept playing a lot of jokes.”

Baekhyun playfully commented, “Ten was probably really surprised. He probably thought I was someone who worked really hard,” and Ten joked back, “[No,] I kind of guessed.” Baekhyun then mentioned that when he was resting in the practice room, the NCT members often came over to him and offered to help him up, saying, “You can do it.”

Kai remarked, “In my opinion, [these SuperM preparations] are probably the hardest Baekhyun’s ever worked in his life.”

Taemin then revealed, “I was really surprised in many ways by Mark. Mark has a broader view than I’d thought. He pays a lot of attention to his surroundings, what members are there, things like that. He’s very meticulous.” 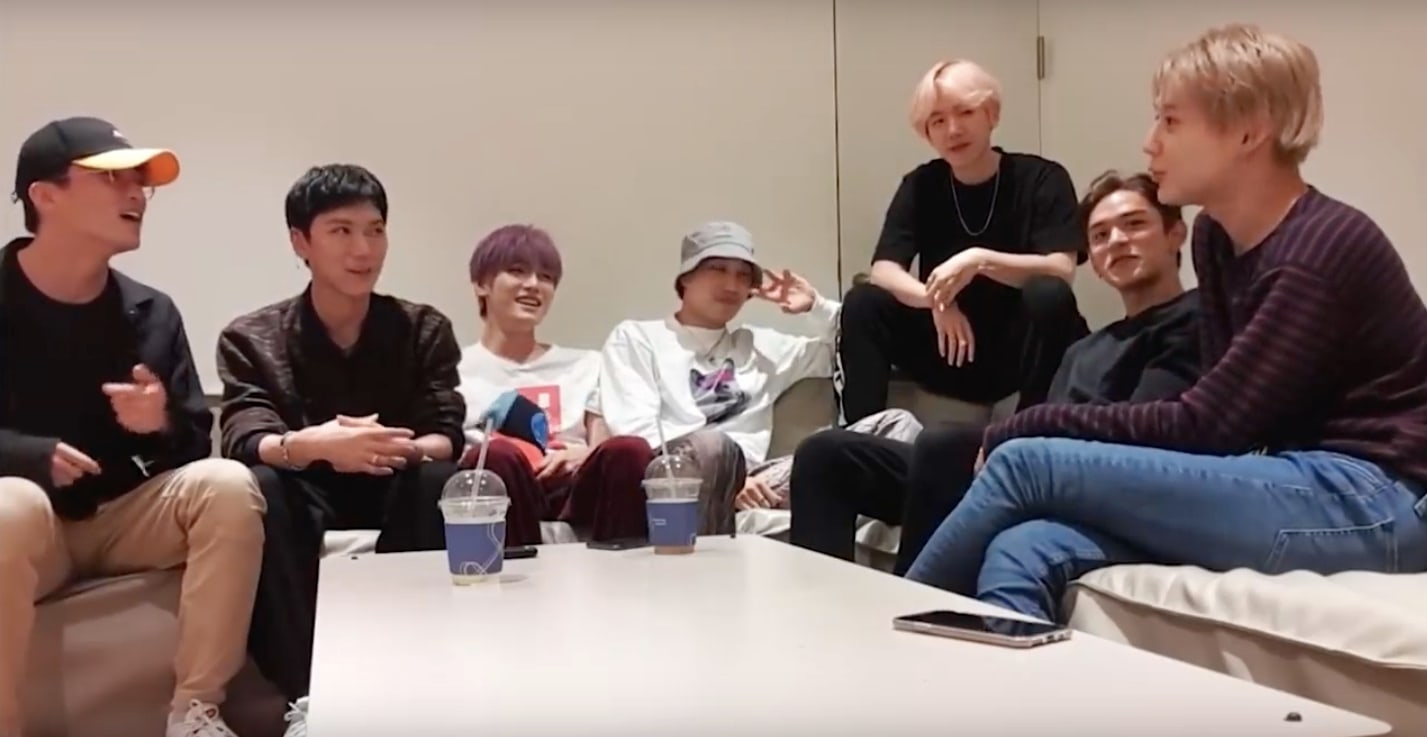 After mentioning that they have yet to choose an official group greeting, SuperM ended up broaching the subject of who would be their leader. Baekhyun immediately named Taemin, but Taemin interrupted him to say, “No, I personally think that it’d be best if Baekhyun were the leader. It’s true that if you look at the length of our careers, mine is longer, but even in SHINee, I was the youngest. And since we [SuperM] practiced a lot together, [I noticed] that Baekhyun takes especially good care of the other members, and I rely a lot on him as well. To be honest, I personally wanted to request that Baekhyun take on the role [of leader].”

Baekhyun jokingly responded, “Ah, I wouldn’t mind being leader,” before suggesting that they take turns in the role. However, both Kai and Taemin strongly insisted that Baekhyun was the right person for the leadership role, with Kai pointing out, “Both in EXO and in SuperM, you have a lot of influence on the group atmosphere.”

At the end of the discussion, Baekhyun agreed, “Okay, so it’s been decided that I’ll be the leader. Thank you.”

Finally, SuperM wrapped up the broadcast by asking fans for input on what their fandom name should be. Although the members floated a few funny ideas for laughs, they ultimately agreed that their fandom name was very important and that they wanted to take their time deciding on what was best. 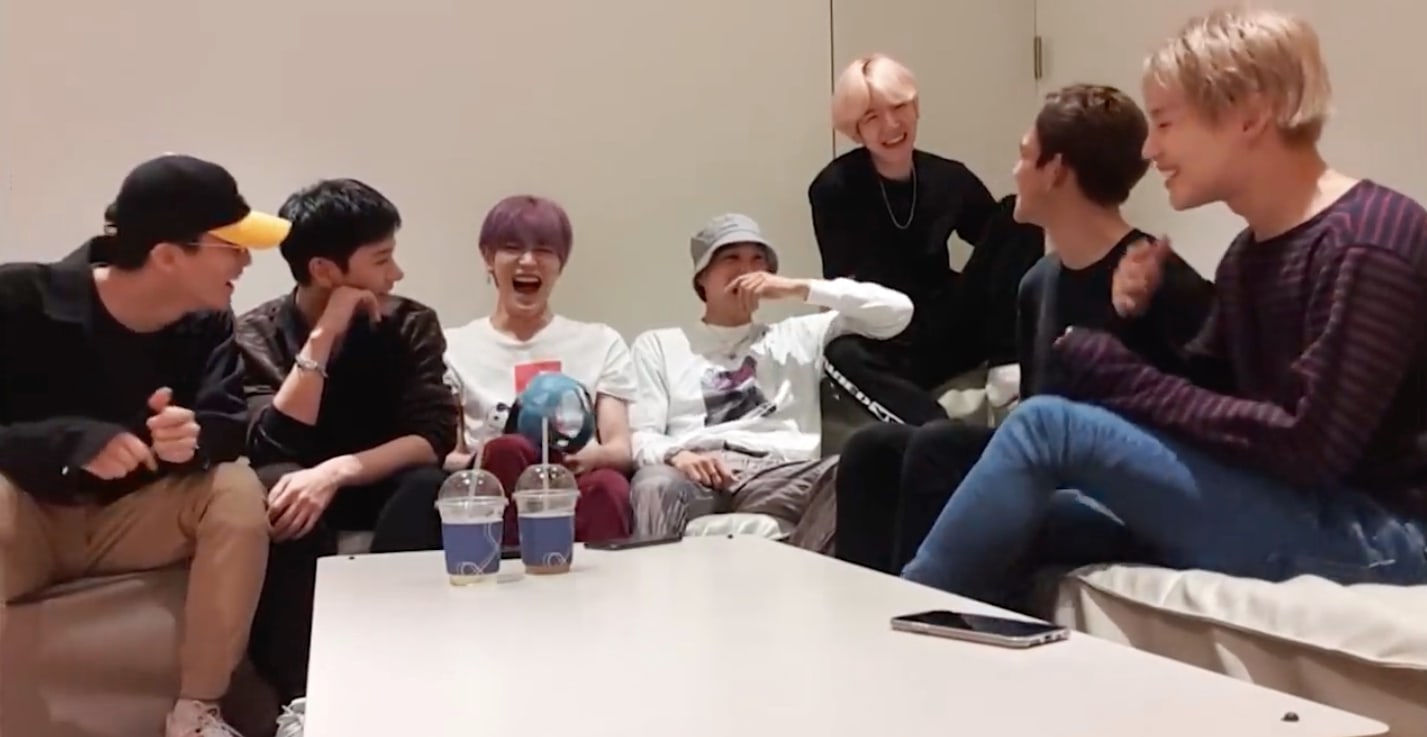 SuperM is currently gearing up to make their official debut in the United States on October 4. In the meantime, check out their latest teasers for Baekhyun, Taeyong, and Ten!