Exclusive: DAY6 Opens Up + Makes Their Fans Part Of The Show At 1st Stop Of “Gravity In USA” Tour In New York

DAY6 kicked off the U.S. leg of their “Gravity” world tour with a bang!

On September 12 and 13, DAY6 proved that they are ready to rock the United States during two exciting back-to-back concerts in New York’s Times Square, the first stop of their seven-city stateside tour.

Although the band thrilled the crowd with their passionate energy and signature sound, what made the concerts especially memorable was their constant interaction with their fans, for whom they displayed an unparalleled love and appreciation.

Throughout the show, DAY6 made every effort to stay as connected to their fans as possible, whether by encouraging them to sing along, asking for their opinions, or engaging in a fun back-and-forth with them during their performances. Jae also explained that not only had they specifically crafted their U.S. set list with their American fans in mind, but they had even written their latest mini album “The Book of Us: Gravity” with the goal of creating the kind of music that fans would enjoy listening to live at their concerts.

Towards the beginning of the night, he declared, “I hope you guys are ready for a beautiful evening of jumping [around], not caring what other people think about us, and just going crazy. And to create these kinds of good memories that we want, we have prepared a very special set list for you guys. As you can see from the first five songs, our set list this time is a little bit associated with our album. We went into the album thinking that we want to make more concert-fueled music—we want to vibe with you guys better, you know?”

Jae also specifically noted, “We changed the set list for you guys,” revealing that the band had paid careful attention to their fans’ requests on social media. Right before performing their 2017 B-side “Lean on Me,” he joked, “This was one of the songs that you guys relentlessly sent to me on Twitter; therefore, we put it in the [set] list.”

All that dedication to giving their fans a special night to remember seemed to pay off: the crowd’s enthusiasm and energy as they danced and sang along to the music never waned throughout the evening, prompting the DAY6 members to comment multiple times on the fans’ tireless energy and impressive mastery of their Korean lyrics.

The band also took things a step further in a fun segment where they got their fans even more directly involved in their performance. “We made another section in our concert during this tour that we really wanted to do with you guys,” explained Jae, “because the members wanted to hear your voices. So we’re going to be your instrumental real quick for a song, if that’s okay, and you guys can sing along. We want to hear those voices.”

After listening to the crowd’s song requests, the band spontaneously chose two tracks to perform together with their fans—then basked in the sound of the audience singing together in perfect unison as they played the instrumental without singing.

In addition to connecting with their fans on a musical level, DAY6 also connected with them in a more personal way: at the end of their second concert in New York, Wonpil grew emotional as he opened up about his thoughts and feelings, and the band went on to express their deep gratitude and share more than one inspirational message for those in attendance.

Wonpil began his remarks by saying, “I’m sure each of you had important things to do, so thank you so much for taking the time to sing and dance together with us today.” He then teared up slightly as he went on, “Also, we’re still young, right? So it’s okay to be struggling or going through a hard time.”

“For example,” he continued, “I think it’s okay to not have a dream. We still have lots of things we need to do and lots of new food we need to try. We still have lots of things left to do over the course of the rest of our lives. So I think the struggles will all work out, and I believe that you’ll be able to overcome your hardships. It’s okay if you’re going through a rough time, and it’s also okay if you’re not. At this point [in our lives], it’s all okay.”

Young K responded to Wonpil’s speech by opening up about his own state of mind, agreeing, “I think that’s true. It’s okay to not have specific goals. They say you need it, but honestly, I don’t have one [right now]. Before my debut, when I was a trainee, I wanted to be a singer. I wanted to debut. And when I debuted, I wanted to, you know, go on big stages, have great performances. But after four years, thanks to you guys, DAY6 actually have been on big stages and have had great times, great performances, thanks to you. And you guys [recently] gave us the honor of winning first place on music shows.”

He went on, “A lot happened this year, 2019. It was a great year. And after thinking about ‘Okay, what’s my next step? What’s my next move?’—honestly, other than being healthy, being happy, having a great time with DAY6 and My Days [DAY6’s fandom], I can’t think of any.

“Is it a bad thing to not have a specific goal? Because I honestly just want to enjoy every moment. And today, I enjoyed it. Did you guys? I think that’s all that matters. Trying to enjoy every single moment that we live, so that it becomes our ‘best part.’ So thank you for letting tonight be one of my ‘best parts.’ You guys were amazing! Thank you, New York!”

Riffing off Young K’s reference to their song “Best Part,” Sungjin remarked, “[Young K] mentioned ‘Best Part,’ which made me think of something. If you imagine a puzzle, each ‘part’ is a piece of that puzzle.”

“If you think of our concert in New York City tonight as a puzzle,” he continued, “then each and every one of you is a piece of that puzzle. Truly, if a single one of you had been missing tonight, then our concert would have been incomplete, and we wouldn’t have been able to put on the show [the way we did]. That’s how important all of you are, and you all deserve so much love. So love yourselves.”

Sungjin added, “Until the day we return, please stay healthy and happy, okay? When we come back next time, I’ll try speaking in English.”

confetti starting falling only on dowoon it was so pretty ? #DAY6GRAVITYinNYC pic.twitter.com/K713ACayAT

Dowoon thanked the crowd for their enthusiastic response, saying, “Today was our second concert in New York, and we had a great time. Throughout the concert, I was really happy, because I loved hearing all of your voices. We’re going to come back [to New York] again, so when we come back next time, please let us hear your beautiful voices again. I hope you are always happy… and be healthy! Thank you, guys.”

After similarly expressing his gratitude, Jae reflected on just how far DAY6 has come as a band. “First off, most importantly, a round of applause to you, New York, for being the most amazing start to our tour,” he said. “So New York was our kick-off to the North American leg of our ‘Gravity’ tour, and it’s been an interesting three days.”

“We came, and then we did all these interviews,” he continued in a humble, slightly disbelieving tone. “We had a media day in America—that’s wild, no? Y’all saw that? We were on the news! That’s crazy.” He jokingly added, “Also, side note to that: can you guys stop sending me clips of us dancing on the news? Because that’s hurting me a little bit inside every time I see it.”

Jae went on to mention just how much he had enjoyed interacting with the audience throughout the night, commenting, “You guys have been so welcoming and so warm and just beautiful with everything during the tour, during the concerts. Just our reactions, [our] back-and-forth: you guys have been so warm with us. And I feel like our last album and this tour in general have been us trying to give back to you a little bit more.”

“Like I said, we’re trying to make music that would be a little bit more [geared towards our live shows], so that we could have a little bit more energy, collectively, together,” he reiterated. “[Music that would help us] enjoy the moment, so that we could really vibe and feel emotions together, you know? We really hope that that was accomplished tonight for you guys.”

every moment's gonna be my best part ✨✨

In keeping with his self-professed goal of “vibing” with the audience as much as possible, Jae ended the night by politely asking the audience to put down their phones down for “Freely,” the final song of the evening.

“Can I make one small request?” he asked. “I get it, I know we’ve come around, and it doesn’t happen too often, and you guys want to cherish those moments through pictures and stuff, but one request: I know it’s cool to see it later, but I promise you it’s even better to feel it now.”

Then, as if he hadn’t already proven just how much he wanted to get closer to his fans, he jumped off the stage towards the end of the song, eliminating any remaining distance between himself and the audience.

For those of you who missed it over on the stan account, this happened! #DAY6GRAVITYinNYC pic.twitter.com/y0rc1FUp0i 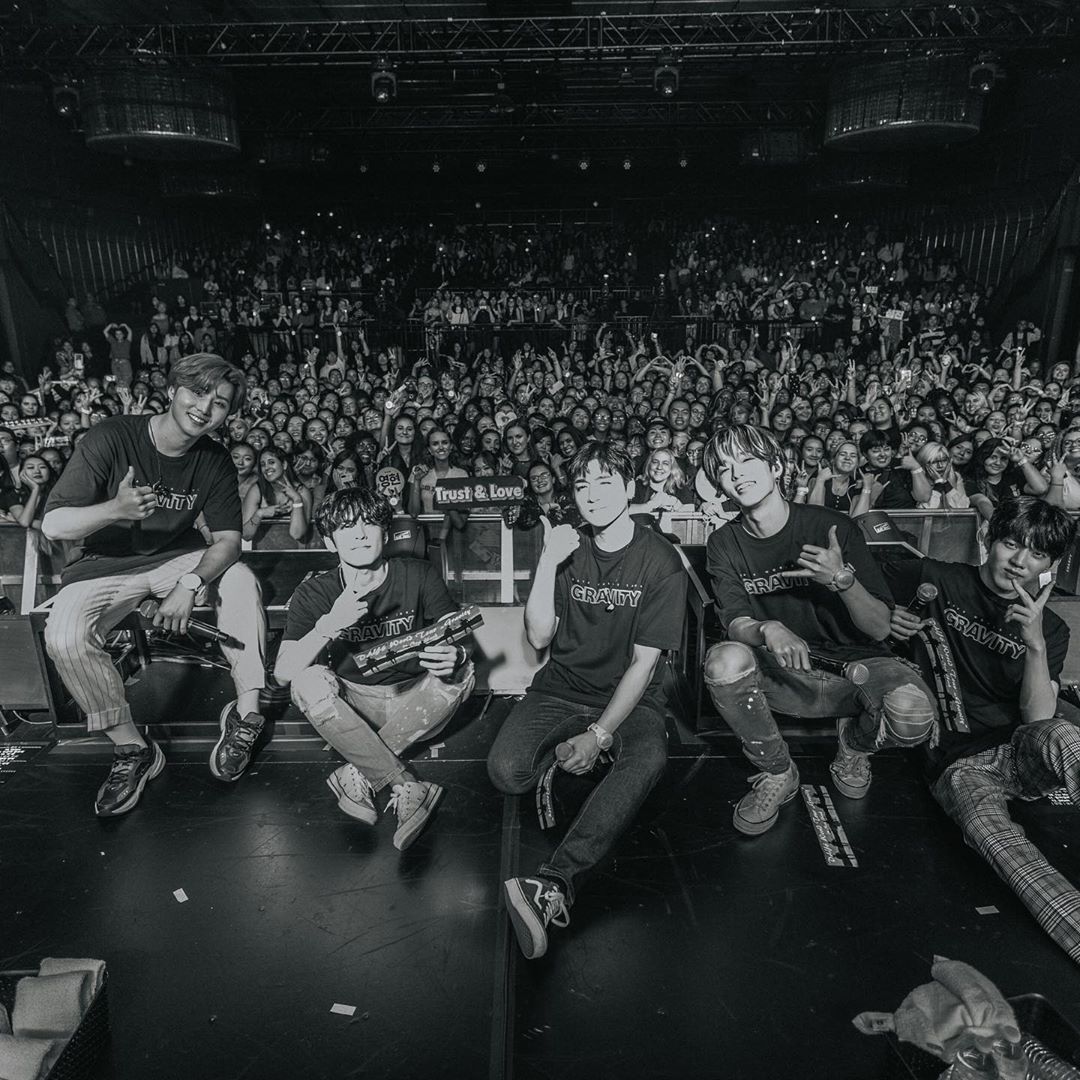 For a chance to win tickets to one of DAY6’s remaining concerts in the U.S., enter Soompi’s giveaway here!

DAY6
Soompi Spotlight
Soompi Exclusive
How does this article make you feel?