On September 17, Good Data Corporation posted their rankings of the most buzzworthy dramas and actors for the second week of September. The results are from the company’s analysis of 31 currently airing and upcoming dramas from September 9 to September 15.

For the second consecutive week, JTBC’s “Moments of 18” took the top spot of most buzzworthy dramas. The drama aired its finale on September 10, and Ong Seong Wu was able to maintain his spot in first place on this week’s list of buzzworthy actors, with co-star Kim Hyang Gi taking No. 5.

tvN’s “Arthdal Chronicles” ranked No. 2 this week after receiving a positive response from viewers. Lead actors Song Joong Ki, Jang Dong Gun, and Kim Ji Won came in at No. 3, No. 4, and No. 10, respectively, on the most buzzworthy actors list.

In third place on the list of buzzworthy dramas was JTBC’s “Melo Is My Nature,” which stars Chun Woo Hee and Ahn Jae Hong. Meanwhile, OCN’s “Strangers From Hell” ranked No. 4 this week.

Following behind in fifth place was JTBC’s upcoming drama “Flower Crew: Joseon Marriage Agency.” Park Ji Hoon, who will appear as the handsome matchmaker Go Young Soo, made his debut on the list of most buzzworthy actors at No. 2, displaying the explosive popularity of the drama even before its official premiere. 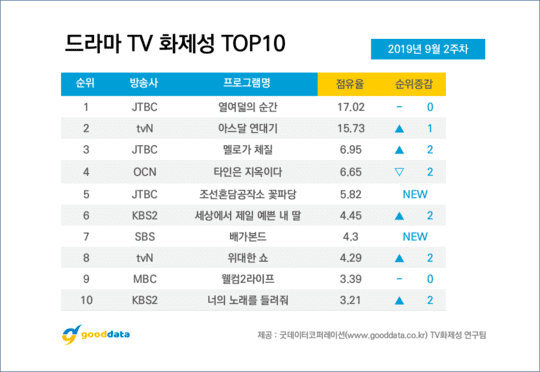 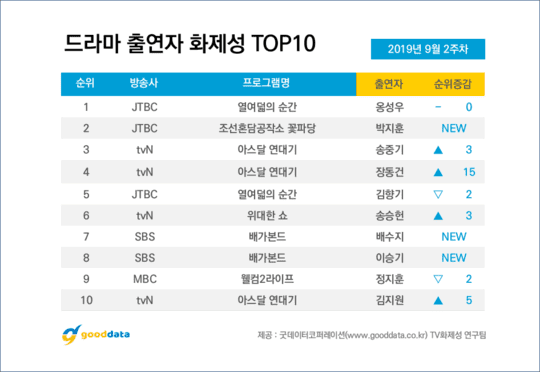