Although seeing an all-kill on Korean charts is rare lately, BOL4 has managed to achieve a perfect all-kill with their new title track “Workaholic”!

A song scores a “perfect all-kill” when it is No. 1 on the daily and realtime charts of Melon, Genie, Bugs, Mnet, Naver, and Soribada; Flo’s realtime chart; and the weekly and realtime chart of Instiz’s iChart. Perfect all-kills (as well as certified all-kills, in which a song tops all charts except for the iChart weekly chart) have been very rare this year, which is largely attributed to changes in the way that some charts calculate their rankings and the addition of the chart Flo in March. The only other song to achieve a perfect all-kill this year was BTS’s hit “Boy With Luv” featuring Halsey in April.

On September 10, the “digital monster” duo BOL4 released their new mini album “Two Five” and its title track “Workaholic.” It quickly soared to the top of many realtime charts, and on September 17, it achieved perfect all-kill status! 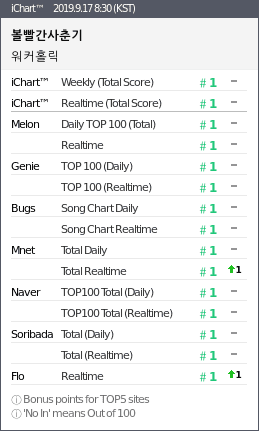 In October, Naver Music and Mnet will be removed from iChart as their services come to an end. Mnet will be combining with Genie Music.