HA:TFELT Responds To Comparisons To Sunmi + Addresses Her Post With Ex-Boyfriend’s Text

HA:TFELT opened up about being compared to her fellow Wonder Girls member Sunmi and talked about the text from her ex that she previously revealed.

On the September 27 broadcast of JTBC’s “Night of Hate Comments,” HA:TFELT guested alongside rapper Nucksal. She spoke candidly about being satisfied with her current activities despite being less well-known than she was in her Wonder Girls days and said that she wouldn’t want to go back to her former agency, JYP Entertainment. 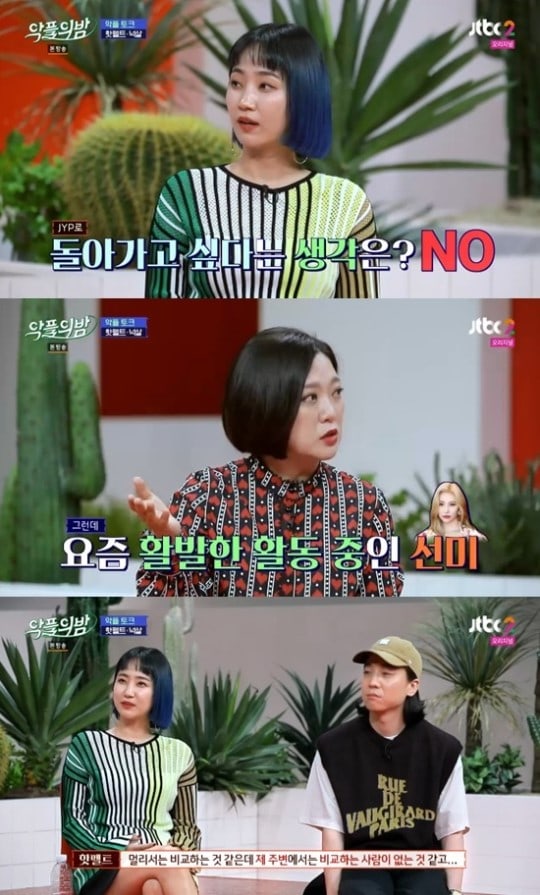 MC Kim Sook then asked if HA:TFELT was ever compared to Sunmi. HA:TFELT stated, “Outsiders seem to compare us, but the people around me don’t. I have my own path, and I don’t find what others think to be important.”

HA:TFELT also discussed the text message from her ex-boyfriend that she posted in August. She expressed her regret for her actions and apologized, saying, “I was wrong for revealing it.” She explained, “My ex-boyfriend’s text became the motif for my recent song, as it was closely related to a real story. I wanted to share the motifs for my music with my fans.”

HA:TFELT (Yeeun)
Night of Hate Comments
How does this article make you feel?