Peakboy and his friends are the talk of the town!

On the September 28 episode of MBC’s “How Do You Play?”, Yoo Jae Suk and his star lineup of producers discussed the details of their song.

Yoo Hee Yeol said hello to Peakboy, who came out to the meeting with Paul Kim, and he commented that it was his first time seeing the rapper. “This is Peakboy, who’s in the same agency as Paul Kim,” introduced Yoo Jae Suk. “He became a hot topic because he’s close to BTS’s V.”

The producers then watched a clip of Peakboy, Heize, and Paul Kim discussing writing lyrics for the song together. Heize and Paul Kim decided to write from the point of view of people falling in love and noticing things about each other, and Peakboy said, “I don’t really have a lot of tact, so I’ll write from the point of view of someone giving feedback on your situation.”

Yoo Jae Suk later met with Peakboy at the recording studio. The comedian commented right away on the rapper’s changed appearance since the broadcast.

“You’ve changed so much,” said Yoo Jae Suk. “If you do this, people who are watching will [say something]. It’s not even sweater season.” Turning to Paul Kim, he continued, “Why is Paul Kim so raggedy? Peakboy, you shouldn’t pay too much attention [to your appearance] when coming here.”

Paul Kim joked, “He has the celebrity disease,” and Peakboy replied, “I usually go around looking like this. I’ll act like a semi-celebrity just for today.” Yoo Jae Suk commented, “Paul Kim tattles a lot. Peakboy has really become a TV personality.”

Peakboy then made Yoo Jae Suk proud by revealing, “My parents watched last week’s episode of ‘How Do You Play?’ and my father really liked it. He went to a barbecue restaurant and bragged that his son was a singer although he’d never done that before. He said that I went on Kang Ho Dong‘s program.” The comedian replied, “Please correct the name to Yoo Jae Suk.” 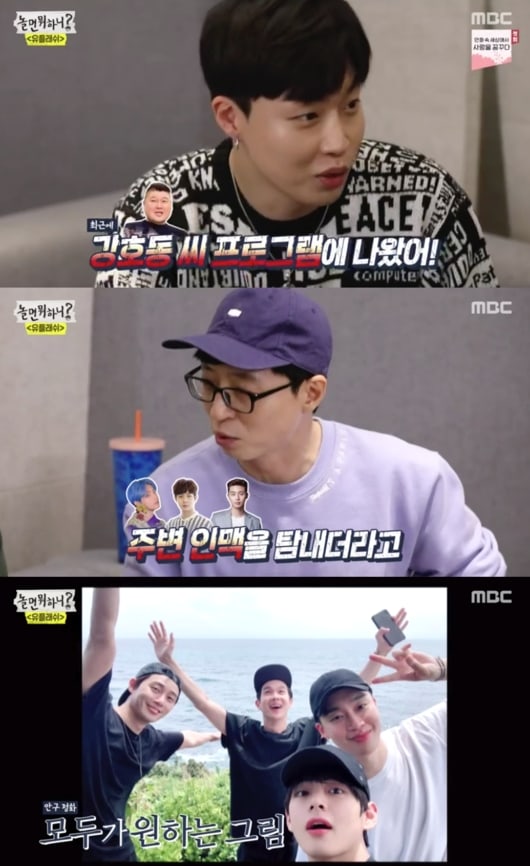 BTS
V
Peakboy
How Do You Play?
How does this article make you feel?