6 Ways The Ladies Of “Queendom” Are Slaying Our Lives

When Park Bom, AOA, MAMAMOO, Lovelyz, Oh My Girl and (G)I-DLE signed on to Mnet’s “Queendom,” we knew the competition would be tough on this comeback battle show. But what we didn’t know was that “Queendom” would be so creative and collaborative, giving these talented ladies the chance to try new concepts and perform at new heights, all while learning from each other and making some adorable friendships along the way. From lit stages to cute cross-group interactions, here are six ways the women of “Queendom” slay us every week!

One of the coolest parts of “Queendom” is that it’s an opportunity for the artists to revamp their images by trying new concepts or reinventing themselves as a group. The show’s first stage marked AOA’s first performance as a five-member group, and the ladies brought their A-game for “Miniskirt” to prove that they are just as captivating as ever. AOA is here to stay!

Lovelyz, on the other hand, has used “Queendom” to branch out of their cute, youthful image and try new concepts, like performing a cover of Brown Eyed Girls’ fierce “Sixth Sense,” and updating their own song “Ah-Choo” with a more mature vibe:

“Queendom” may technically be a competition, but we’re mostly seeing these artists show a whole lot of love and respect for each other. Whether it’s live reactions like AOA’s Hyejeong cutely admiring the sexiness of (G)I-DLE’s Soojin:

Or post-performance praise like when MAMAMOO’s Moonbyul and Hwasa sent AOA love notes after their cover of MAMAMOO’s hit “Egotistic”:

We love watching the girls cheer each other on!

3. Helping each other grow

Of course, “Queendom” is a competition show at heart, so it’s not always fun and games — especially since the artists have to choose a group to upvote or downvote after each performance. As uncomfortable as it is to watch them give each other negative reviews, the ladies all handle it with the grace of professionals. And more importantly, they use each other’s words as constructive criticism to improve themselves as artists. After Oh My Girl received the most downvotes for their first performance, they were motivated to pull out all the stops for their next stage, a cover of Lovelyz’s “Destiny.”

Their traditional costumes, live vocals, and remixed performance were so spectacular that we still haven’t picked our jaws up off the floor — and their hard work earned Oh My Girl the top spot in the rankings for the second round! 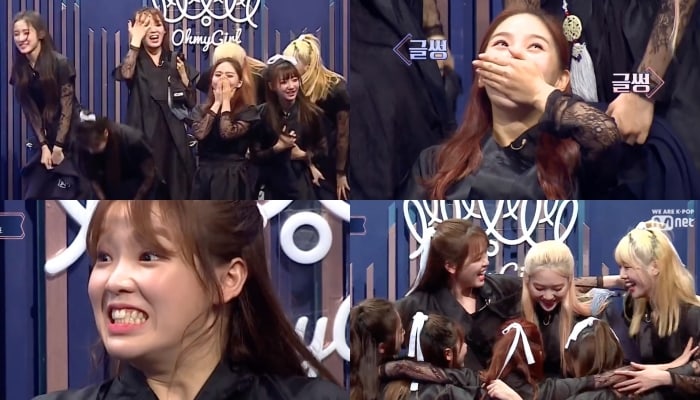 Other artists have been turning it up by showcasing their pure talent, like when MAMAMOO completely reinvented AOA’s “Good Luck” in a way that put the spotlight on each member: Hwasa added a reggae twist to her part, Moonbyul opted for hiphop, Solar sprinkled in some jazz, and Wheein went sexy before all four came together to bring down the house:

Park Bom, meanwhile, has been reminding us all why she’s a vocal queen, like with her unique cover of (G)I-DLE’s “Hann” (featuring a surprise verse from rapper Cheetah). Bom’s cover even entered iTunes charts around the world!

We were expecting a lit stage when we knew (G)I-DLE would be covering 2NE1’s “Fire,” and we were not disappointed. This monster rookie group brought the heat with their homage to the K-pop classic, especially with the 2NE1-inspired hairstyles!

But we weren’t expecting their stage to bring quite so much nostalgia. Park Bom’s tears had us all missing the days of 2NE1, as well as applauding her courage for being the only solo artist on “Queendom.” 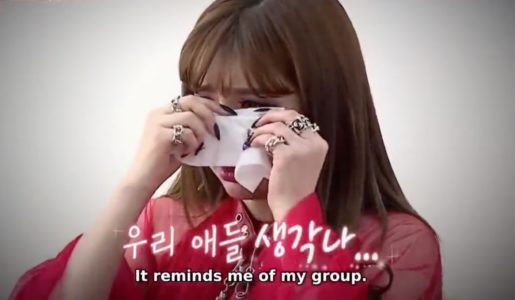 And her kindness towards the younger groups is beyond sweet!

We also loved watching other groups release their inner 2NE1 fangirl hearts. If MAMAMOO ain’t all of us…

Aside from the performances on “Queendom,” we’re all about the inter-group friendships that are blossoming on the show. How cute was it when Park Bom set up a welcome party for (G)I-DLE?

Almost as cute as when the younger group brought Bom a literal bouquet of corn, her longtime favorite snack.

As the competition gets tougher and the stages get more intense, we can’t wait to watch these friendships continue to grow. “Queendom” ladies, fighting!

Hey Soompiers, are you watching “Queendom”? Which artist are you cheering for? What’s your favorite moment so far? Let us know in the comments!