The identity of the singer behind the Genie mask was finally revealed.

Unfortunately, Handsome Cartoon Guy was able to stop Genie from getting his sixth consecutive win with a score of 53 to 46.

As he commented, “It’s time for me to return to my lamp,” Genie took off his mask and revealed his identity. 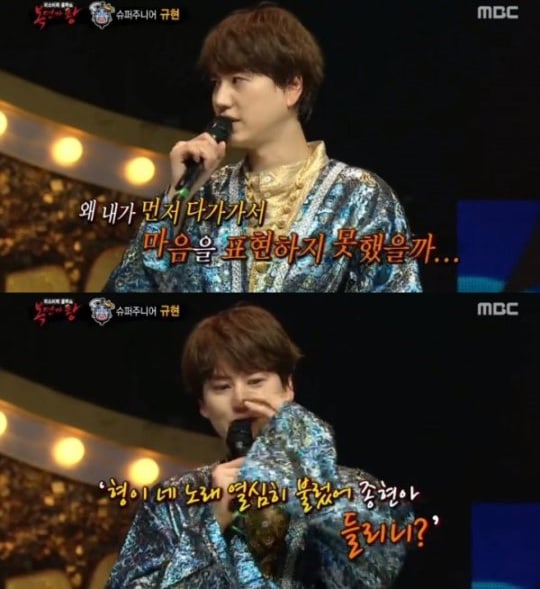 The former King turned out to be none other than Super Junior’s Kyuhyun!

After greeting the panelists and audience members, Kyuhyun admitted that he felt somewhat burdened by his multiple wins, but he continued to express his gratitude about being able to showcase his singing through the program.

When asked about his song choice, Kyuhyun replied, “This is the song that our Jonghyun released as a solo track for the first time. I was a trainee for only two months, so I didn’t know many people. After debuting, we were really friendly, and we were in a unit group together. The incident occurred while I was serving in the military, and I cried a lot. I thought, ‘I’m older, why couldn’t I approach him first and express my thoughts.'”

With a shaky voice, he continued, “One day, I wanted to perform his song on a television program and tell him, ‘Hyung worked hard to sing your song, Jonghyun. Are you listening?’ I believe that he enjoyed [my performance].”

SHINee’s Jonghyun passed away on December 18, 2017. He had made his unit debut alongside Kyuhyun, TRAX’s Jay, and PENTAGON’s Jinho (who was previously an SM Entertainment trainee) as the group S.M. the Ballad in 2010.

Following the broadcast, Kyuhyun took to Instagram to write, “I was happy to meet viewers every weekend under the ‘Genie’ mask for three months. I remember laughing after reading this comment that said, ‘Even if I listen while doing a somersault, [the identity of Genie] is Kyuhyun.’ When I first became a singer, I thought that it’d be nice if many people recognized and loved my voice, but the things I’ve been dreaming of are becoming a reality already, so I was incredibly grateful during my time [on the show]. I’ll continue to work hard and grow as an artist who shares great music. Thank you to everyone who showed their support.”

Watch the full episode of the show below:

Super Junior
Kyuhyun
The King of Mask Singer
How does this article make you feel?