On October 10, a press conference was held for TV Chosun’s new drama “Leverage.”

“Leverage” will tell the story of Lee Tae Joon (played by Lee Dong Gun) who transforms from Korea’s former top insurance investigator to its top con man. He teams up with the best con artists to get revenge on the wealthy and corrupt. It is a Korean remake of the U.S. series of the same name, which aired over five seasons on TNT. Lee Dong Gun, Jeon Hye Bin, Kim Sae Ron, Kim Kwon, and Yeo Hoe Hyun are the main cast members.

Director Nam Ki Hoon explained the difference between the Korean version and the original version, saying, “The original drama has American elements. That can be a positive thing, but [in the remake], we added Korean elements and touched up the colors and visual aspects a bit more.

The actors also shared their excitement for the drama’s premiere. Jeon Hye Bin, who originally had other plans after her previous project KBS’s “Liver or Die,” said, “I actually rejected [‘Leverage’] once because I already had other plans. Then I once picked up the script without much thought, and it was so interesting. I felt like I would regret my choice, so I decided to postpone my other plans and choose [‘Leverage’]. There are days when I get a gut feeling. It’s not something that comes often in life, but I had the gut feeling that this production would hit the jackpot.”

Lee Dong Gun added, “The original drama has lots of American elements, and we deviated from that. This is a drama that [Korean] viewers will watch, so we tried to portray it in a different and captivating way.”

Adding to this, Yeo Hoe Hyun said, “At the same time, we tried not to harm the original drama. I think an American ethos is different from a Korean ethos, but it wasn’t too hard to portray our characters in the Korean way. I also think that the casting was done well because [the actors] each have strong characteristics that were depicted well [in the drama]. You can look forward to it.” 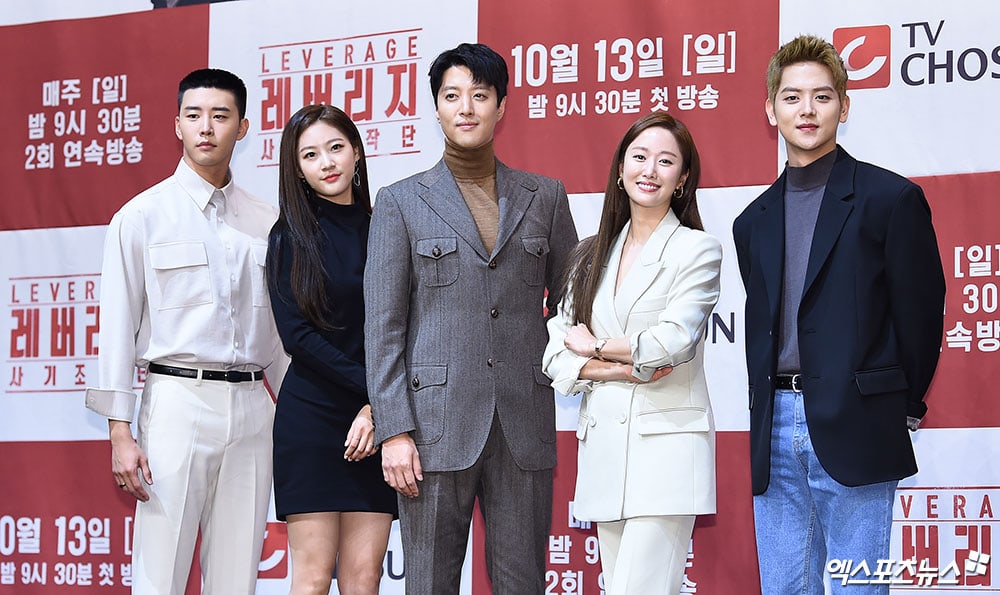 Kim Kwon explained how he prepared for his role as Roy Ryu, who is described as a “human weapon.” He said, “I don’t normally have a ‘macho’ image like the original character, so I thought a lot about how I should build my own Roy. I had to focus and bulk up, so I naturally received a lot of help.” Kim Sae Ron shared, “I tried to portray [my character] by focusing on her free-spirited, bright, lovable, and quirky personality.”

“Leverage” will air two episodes back-to-back every Sunday. Regarding the unique broadcasting schedule, director Nam Ki Hoon shared, “There haven’t been any precedents of this so there’s some pressure, but I’m feeling confident because viewers will watch the drama if it’s entertaining.” He added, “I hope we hit TV Chosun’s highest viewership ratings.”

Jeon Hye Bin shared, “I once said that we should aim for 10 percent ratings for the first time in TV Chosun’s history, and if that happens, I’ll be really happy.” The director promised that he would reveal his self-composed “Leverage” theme song on YouTube if the drama reaches 10 percent in ratings.