The vocal and performance unit performances were finally unveiled on Mnet’s “Queendom”!

On the October 10 broadcast, the contestants competed in the third round where members from different girl groups collaborated in units.

Lovelyz’s Kei and MAMAMOO’s Hwasa showed off great chemistry. Hwasa said, “Kei is a friend I feel comfortable with. I thought that she might be shy, but she leads me. She actively approached me as if she was saying, ‘You’re mine.’ It surpassed heart-fluttering emotions, and that kind of appearance made it easier to choose a partner. It made me think, ‘It’s her.'” The two singers spoke often via text message and phone calls, and practiced by exchanging audio files.

Last week, (G)I-DLE’s Minnie was praised for her unique voice at the interim check. Focusing on preparing for the competition, she said, “I’m going to work harder for my members because I’m representing my team.” AOA’s Hyejeong finished recording with ease. “I didn’t have an opportunity to show my vocal aspects,” said the idol. “I’m nervous and scared because I have the opportunity to show something on ‘Queendom,’ but I also think that it’s a fun challenge.” 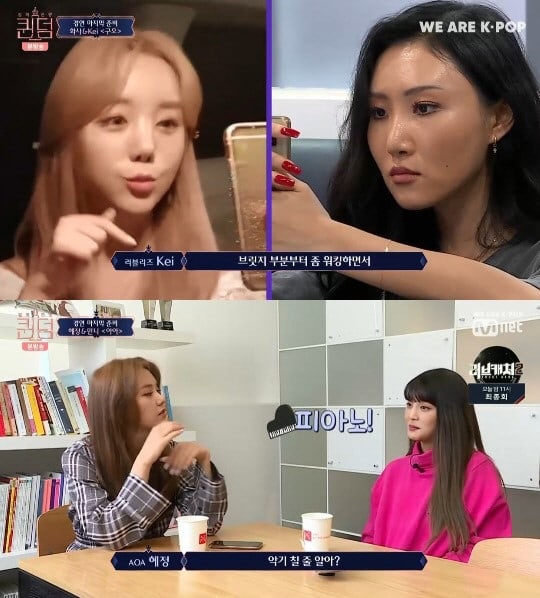 Park Bom and Oh My Girl’s Hyojung showcased sister-like chemistry. When Hyojung had difficulty expressing her emotions, Park Bom explained the meaning of the lyrics of Lee Hi’s “Scarecrow,” and they burst into tears together.

“I tend to cover up difficulties as something good and get rid of that memory,” revealed Hyojung as her eyes filled with tears. “Ever since I was young, I endured and overcame difficult things by imagining a good version of myself in order to make it all okay. There were many times when I felt like I was alone. I think I hoped that people would like me since I was young. If it wasn’t the case, then I blamed myself. I need to love myself, but I didn’t love myself so I felt lonely.”

Park Bom also cried while hugging Hyojung in order to comfort her. The solo artist said, “It’s very difficult that I’m alone, that I have to do it on my own, and that I have many things to think about. There are many times I think that I’m alone when living this lifestyle, so I hugged her.” Park Bom gave endless praise to Hyojung while recording, and the Oh My Girl member gained strength as she improved. 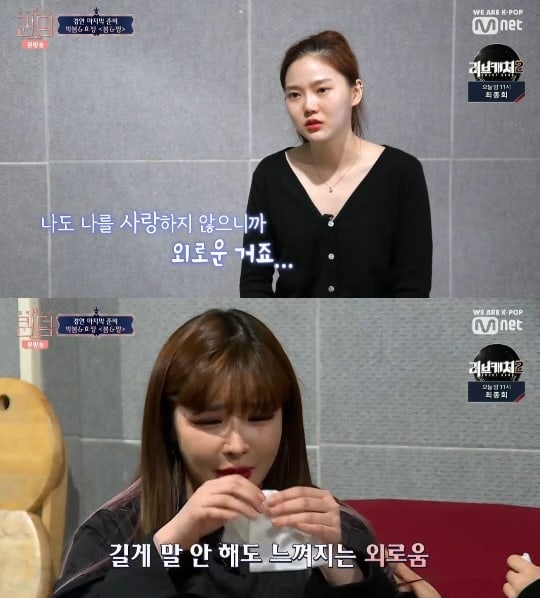 The day of the competition finally arrived and Park Bom and Hyojung were the first ones to perform. They filled the stage with an emotional rendition of Lee Hi’s “Scarecrow,” and Park Bom moved others by crying on stage. After the performance, Hyojung said, “I felt like I was being comforted by her. I felt like sadness was lifted and it ended after I was comforted.”

Hyejeong and Minnie went next with their cover of Dean’s “Instagram.” At rehearsals, they looked nervous when faced with a quiet stage and the burden of having to play the piano. The two idols, however, successfully completed their performance that highlighted their great teamwork. Expressing satisfaction, Hyejeong commented, “This was the best out of the ones we’ve done so far.”

The final vocal unit stage of the night was by Hwasa and Kei who didn’t have many chances to practice their song, Billie Eilish’s “Wish You Were Gay,” together. Hwasa captivated with an alluring vibe while Kei showed a surprising, mature side of herself. Afterward, Hwasa said, “I’m never satisfied. I just feel relieved.” Kei added, “I’m relieved that I did a good job with Hwasa without making mistakes, and it was a good experience.”

After the vocal units showcased their voices, performance unit Six Puzzle took the stage. In the practice clip, the sixth mystery member was revealed as Brave Girls’s Eunji who appeared as Park Bom’s supporter. Although it was her first time working with the Six Puzzle members, Eunji flawlessly fell into place. The members had some difficulty memorizing the fierce moves, but continued to passionately prepare for their individual parts as well.

On stage, each member showcased her individuality. Lovelyz’s Yein showed the perfect harmony balance between modern dance and music, while (G)I-DLE’s Soojin revealed her sexy side. AOA’s Chanmi put her charismatic moves on display, and the performance ended with a powerful dance number by the unit.

“We worked hard to create one stage as six members to the point where we forgot that it was a competition,” said the unit after the performance. “It was a good time where we got close. We won’t be able to forget about this performance for a long time.”

“Queendom” airs on Thursdays at 9:20 p.m. KST. Which performance was your favorite?