That being said, other than a (failed) kidnapping by two very incompetent thugs, barely anything happens on the mystery front. The Big Bad pops up here and there and name drops the look-alike who’s still frozen in the capsule, but again, there’s not enough substance for me to make heads or tails of it (or to be invested in, if I’m being honest).

On the relationship front, however, things are making much more headway, and the relationships are getting complicated (in a juicy way). So here’s a look at how all the different pairings (love triangles?) are doing so far:

Warning: Spoilers for episodes 5 & 6 ahead.

We pick up right where we left off last week — with Ma Dong Chan (Ji Chang Wook) confronting Na Ha Young (Yoon Se Ah) about burying information regarding his disappearance. She insists that she’s been feeling guilty about it these past 20 years, constantly hoping that she would see a news article saying that he’s been found, or even… dead, so she can finally be at peace. “So you’re disappointed that I came back?” asks an incredulous Dong Chan.

Ha Young insists to Dong Chan that there’s a reason she hasn’t gotten married all these years, and later, we see that she has kept the ring he gave her pre-freeze. She puts the ring back on and seeks out Dong Chan, wanting to rekindle their relationship. “Our love hasn’t ended,” she says.

First of all, it’s a little difficult to buy into the notion that Ha Young has been in love with Dong Chan all these years. Regrets and lingering affection? Yes. But in love in love (yes, I realize I sound like I’m in 7th grade), so much so that she held out for him for 20 years? That I find less believable. Call me a romantic, but if you really loved someone that much, would you really have allowed him to remain missing, especially since Ha Young knows about the experiment? Yes, she was tempted with a sweet promotion, but even after that, instead of using her bigger stage and higher social status to dig into things, she still chose to keep quiet. Dong Chan’s sense of betrayal here is entirely deserved, and by the looks of things, it’s outweighing whatever feelings he still has for her.

You can’t keep a life-changing secret and expect things to go back to normal, Ha Young!

This “relationship” with three legs totally cracked me up this week, and the three respective actors deserve props for delivering the humor while also injecting real human emotions into the very awkward situation. This balance is actually what I’ve been missing from this drama. I don’t mind a drama that’s on crack, but it needs to still be grounded emotionally for me to be invested, and I think that it found a good (or at least, better) balance this week.

For most of this week’s episodes, Go Mi Ran (Won Jin Ah) and Hwang Byung Shim (Shim Hyung Tak) still remain largely oblivious to what’s truly going on. But when the *thing* hits the fan, boy, does it get messy quickly. Byung Shim, in true Byung Shim fashion, avidly believes that Mi Ran is still madly in love with him (even wondering if she reincarnated just to meet him again!). He tells her he wants to get back together, even going so far as to say he’ll get a divorce now that Mi Ran is back in his life. Mi Ran is so ticked off by his advances that she fights him off and, in a parallel of events, they end up at the police station. Again.

Unbeknownst to Mi Ran, Byung Shim is now married to her best friend Oh Young Sun (Seo Jeong Yeon). So when she meets up with her friends and goes on a tirade about her “lunatic” ex-boyfriend and his various admissions of love, things get really awkward, really fast. Granted, Byung Shim and Young Sun look more exasperated than in love with each other, but it’s still got to hurt to hear that your husband is intent on winning his ex back.

Mi Ran and Byung Shim undoubtedly have no chance of rekindling, but I do have hopes for Byung Shim and Young Sun to work things through. Hey, if a woman is willing to drive to your workplace to give you a change of pants, surely there’s still some feelings there, right? Also, majorly-self-involved Byung Shim is all kinds of hilarious, and I kind of want to see him being put through the wringer. Heh!

To make things even more complicated, the three-legged relationship apparently has another baby leg. Okay that metaphor pretty much fell apart there. Anyway… Mi Ran’s quirkiness (read: her ’90s self) catches the eye of two cute guys in her class. The three of them quickly warm up to each other, especially after they’re grouped together for a class project. Thinking that she’s a ’96-liner, they affectionately refer to her as their “noona” (if only they knew!). What could potentially be a sweet campus romance is destined to be another very awkward encounter, because that cute guy? He’s Byung Shim and Young Sun’s son Ji Hoon (Golden Child’s Bomin)! Yikes!

And assuming that Ji Hoon is currently 19 years old, that would mean that Byung Shim and Young Sun would have to have gotten pregnant pretty much right after Mi Ran went missing. That relationship sure went from 0 to 100 real quick!

As for our main couple, I’m so glad to report that things are heating up! Arguments could be made about Dong Chan opening up to someone new sooo quickly (he was literally just in love with another girl a few days ago), but the drama really comes alive when Dong Chan and Mi Ran are on screen together, so I’m just going to put my blinders on and ignore it.

All their interactions, bickering and such, are just so natural and easy-going, it feels like they’ve known each other for much longer. Their little squabble at the police station, where Dong Chan constantly changes his stance, is childishly funny…as is their blasé conversation when they’re kidnapped and trapped (comfortably) in a frozen food truck.

Perfect excuse to not wash my hair tonight!

Dong Chan feels guilty for what happened to Mi Ran and thus feels that he’s partly responsible for her present life. And after Mi Ran ends up in the hospital from over-heating, he decides to come clean about the cryogenics experiment on national TV, partially out of guilt and partially in hopes to draw out people who can potentially help them with their pesky body temperature problem. This sense of responsibility is what initially draws him to her, but those long lingering looks and his comfortableness around her indicates so much more! Cue the heart-thumping!

A. Dr. Hwang is starting to get flashes of memories. He’s also now the resident onion peeler at the BBQ restaurant.

B. Dong Chan’s family’s dinner-table rendition of Cinderella is GOLD! (Cinderella and the Prince are… *gasp* siblings!)

C. After his admission on TV, Dong Chan is now officially the nation’s Captain Korea! LOL! 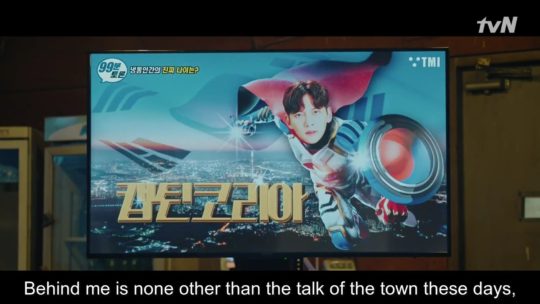 Watch the latest episode of “Melting Me Softly” here:

Is the drama starting to grow on you? And do you miss seeing Nam Tae as much as me? Also, were you half-expecting a gratuitous shot of Ji Chang Wook’s abs when he went to shower himself down? Let us know in the comments below!

Belinda_C finds it hilarious that in this drama, JCW resorts to hair-pulling while fighting! Talk “Melting Me Softly” and SEVENTEEN with her on Twitter!