MC Mong has achieved a perfect all-kill with his latest track “Fame“!

MC Mong released his eighth album “CHANNEL8” and its title track “Fame,” featuring Song Ga In and Chancellor, on October 25. After less than three days, the song has achieved a perfect all-kill! 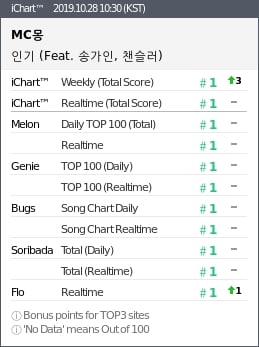 “Fame” is the fourth song of the year to score a perfect all-kill, with the other songs being BTS’s “Boy With Luv” in April, BOL4’s “Workaholic” in September,” and AKMU’s “How Can I Love the Heartbreak, You’re the One I Love” in October.