The “Queendom” contestants shared their thoughts after the finale!

On the October 31 live finale of Mnet’s “Queendom,” MAMAMOO came in first, and this means they’ve won the opportunity to hold their own comeback show on the network. The next day, MAMAMOO expressed their gratitude towards their fans MooMoo, the staff, and more after their win through an interview with the press.

Solar said, “There were so many people who worked hard during ‘Queendom’ and I wanted to tell them that they really did a good job. Also, to our MooMoo who were the most anxious while doing this together with us! I’m really grateful and I think this award is one that we all achieved through our efforts. Thank you.”

Moonbyul also shared how thankful she is for their fans, adding that they make up for what the group lacks. “We were able to come this far because MooMoos were with us,” she said. “Also, I liked that I was able to learn a lot while doing ‘Queendom’ and I think that all of the six teams are No. 1.”

Wheein thanked everyone for showing so much interest and love. “I think it’s been a meaningful time for us because you’ve been a great help for the path that MAMAMOO will be taking in the future,” she said. Wheein also expressed her love for everyone who worked hard to make it happen as well as her fellow members.

Hwasa said, “I couldn’t even have predicted that we’d come in first and I really never imagined that I’d cry, so I was so surprised in that moment. I’m very grateful to many people but it seems that I went through a lot emotionally during that time.” She said that as she hadn’t been able to express her gratitude fully in the live finale, she wanted to use the opportunity to say how thankful she is. “I also send so much thanks and love to our MooMoo,” she added.

Oh My Girl also talked about how they feel after “Queendom.” The group told news outlets, “We learned a lot and felt a lot, and we want to say that it was an honor to take part in ‘Queendom.’ The time we spent together as the six teams was very precious and we’re grateful for it.”

The group went on to say, “Things we’ll remember for a long time are the time we spent preparing for each performance on ‘Queendom’ and how touched we were every time we went up on stage.”

Oh My Girl continued by saying to their fans Miracle, “We really love you and Miracle is the best.” They added, “As many people supported us, we’re going to feel a greater responsibility and keep improving.”

Park Bom shared a photo on her Instagram with the caption, “Hello everyone. My song came out through the program ‘Queendom’… did you all see the performance yesterday?? I had a lot of thoughts last night after finishing my last performance on ‘Queendom.’ The song is called ‘Wanna Go Back.’ Please enjoy listening.”

(G)I-DLE’s Soyeon shared photos from the group’s post-finale meal and more. She wrote, “‘Queendom’ is finally over! Did you all enjoy the ‘Lion’ performance? It was a really fun performance thanks to our fans Neverland who support us. And it was a time when we were really able to improve. Thanks to Neverland, creating performances and writing songs never seems tiring. I love you, Neverland.” She went on to express her love and gratitude for the many staff who helped them with their performances and their Cube Entertainment family members.

“Also, our (G)I-DLE!” she said. “(G)I-DLE, you’re my confidence, my muse, my treasure. Thank you so much for always believing in me and making the songs I write so cool. Let’s keep loving each other like this for the rest of our lives. Everyone worked hard!!!”

Minnie also took to Instagram to share her thoughts. “The fact that I could stand on the same stage as so many seniors that I respect through ‘Queendom’ was in itself an honor, but it’s unbelievable that I was able to get closer with them while filming and it was such a great experience.” She went on to thank the show’s staff, their team of stylists, and dancers.

“Thank you for allowing me to meet such great people,” she wrote. “It was a happy and precious time.”

She went on to say, “As someone who is afraid of the stage, I came to be less nervous bit by bit and learned how to enjoy doing a performance. I learned a lot while preparing the performances and found various sides of myself, so it was so amazing and new. We were able to improve through this opportunity and it was a great experience and gift for me. To the Neverland who cheered us on from the start to the end! I’m so grateful and love you so much. We’re going to be cooler and improve more in the future. Please watch over us!”

Lovelyz’s official Twitter shared photos from backstage with a message of love for their fans for giving them strength.

Lovelyz’s Yein wrote on Instagram, “I felt a lot of things while doing ‘Queendom.’ I’m so grateful for each and every one of the precious hearts of Lovelinus who said we are the best and cheered for us. You worked hard, Lovelyz. Thank you, Lovelinus.”

Jisoo wrote, “Lovelyz and Lovelinus, you worked hard. In the future, we’re going to work hard so that you only hear good things. Please watch over us. Thank you for protecting Lovelyz. I love you.”

Sujeong said, “Thanks to Lovelinus, we were able to have so much fun while showing new sides of us. You know that I’m always grateful and love you, right?” She went on to thank their dancers and staff.

Jiae shared an entry in which she began by thanking the team for their “Moonlight” performance in the finale.

She went on to say, “2019.11.01. Yesterday? Should I say it was today? Anyway! ‘Queendom’ is over. At our first ‘Queendom’ meeting, I thought it would be a really long time until October 31, but it went by in the blink of an eye. I think that’s because everyone we worked with was so great. It was a really meaningful three months in which Lovelyz, who had no friends, gained many friends and came to know great people too. The thing I’m the most certain about is that in the short time, Lovelyz really did our best and I really, really liked it! The six teams and the ‘Queendom’ production team, you all worked hard. Please love Lovelyz a lot.”

AOA’s Chanmi shared a photo from backstage with the caption, “‘Queendom’ is over. Everyone, you worked hard.”

Yuna posted a similar photo with the caption, “#Queendom. Thank you to everyone who helped. Thank you also to Elvis. Let’s meet again soon.”

Hyejeong wrote, “Everyone, you worked hard!! All the fans who came out today! Elvis! All the people who voted, thank you so much. The photo is something I took a capture of from Twitter, is that okay? I’m taking it to share.”

Jimin posted a photo of herself and wrote, “sorry, ace of queendom” and shared another post from the show with the caption, “Final!”

Seolhyun also posted a photo in her Instagram story from backstage and wrote, “Everyone worked hard. We’ll be back with a cooler performance. I’m really grateful.” 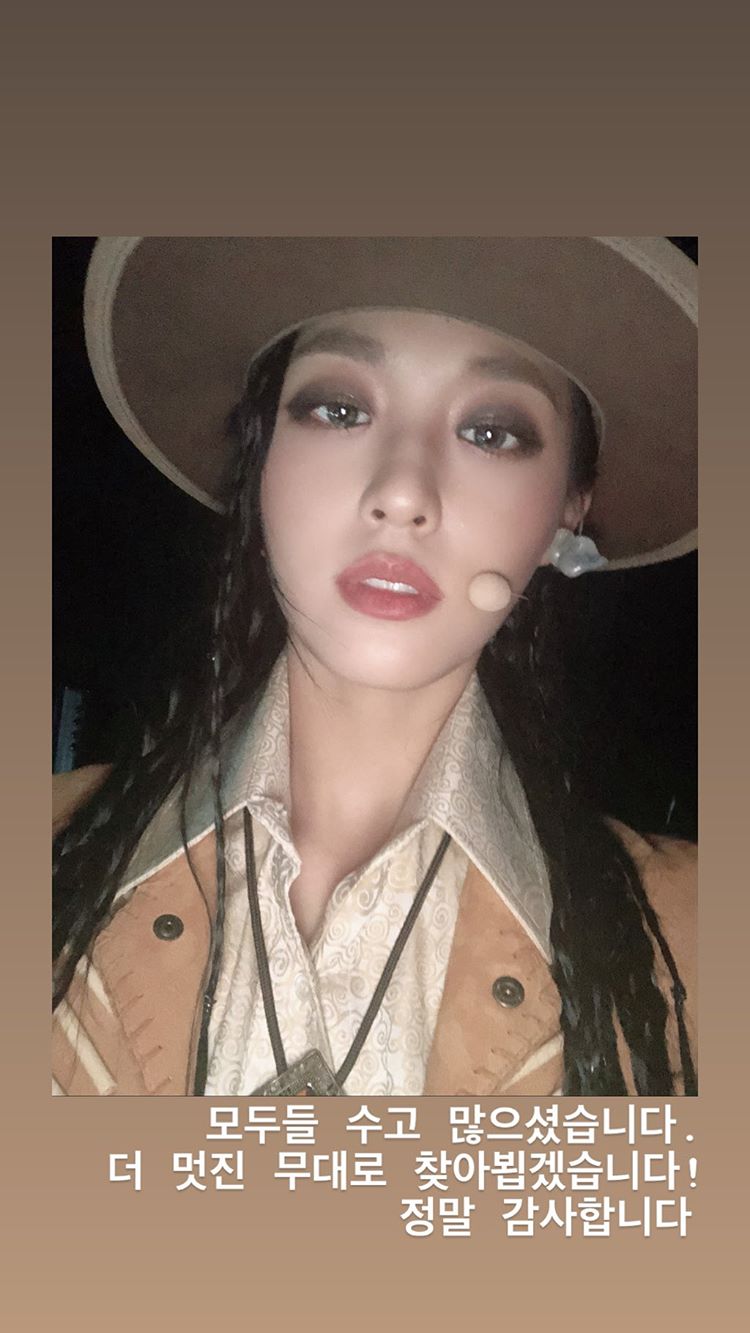 Watch the performances from the “Queendom” finale here!