Update: IU Reunites With Lee Hyun Woo In Nostalgic “Above The Time” MV

IU has revealed a music video for “Above the Time,” one of the B-sides from her upcoming mini album “Love Poem”!

Ahead of the release of IU’s mini album “Love Poem” on November 18, the singer released a new video teaser for her song “Blueming,” featuring a line that says, “Will you bloom a million flowers with me?”

IU shared a message teaser for her upcoming song “Blueming”!

The teaser includes messages shared between two people (labeled as 1 and 2 below) using emoticons that seem to be heart-shaped flowers:

IU shared a lyrics teaser for “unlucky,” a song on her upcoming mini album.

Check out the lyrics below:

You don’t have to overexert yourself in love
It’s okay if you’re not happy for a day
You’re still perfect, my lady um

There are still countless blank spaces, aren’t there?
It seems there won’t be an end to the wandering
among the frustrating tasks that don’t get worked out

Every day seems like
a well planned joke
The more I run, the more it escapes me

Just life, we’re still good without luck
Even if you lose your way, keep taking light steps that make a click clacking sound
There’s no right, honestly perhaps everyone wants to cry
Maybe they get angry
because they don’t want to get sad 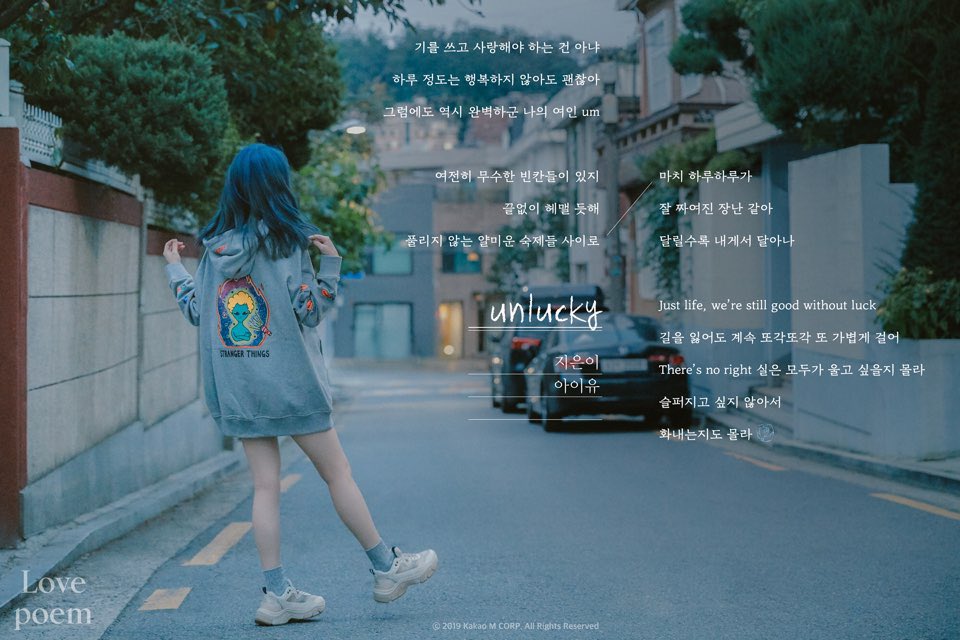 IU has released a sneak peek of another song from her upcoming mini album “Love Poem”!

Check out her new teaser for “Above the Time” below:

On November 4 at midnight KST, IU shared a teaser for her upcoming song “The Visitor!”

Now IU is gearing up for the release of her full mini album and has shared a video teaser for one of the songs, titled “The Visitor.” At the end of the teaser, it’s revealed that her new album will be coming out on November 18.