VICTON shared how they reacted to the chart success of their new mini album!

On November 4, VICTON released their fifth mini album “Nostalgia” featuring the title track “Nostalgia Night.” The song, which was co-composed by member Chan, became their first ever track to enter Korea’s largest music chart Melon, as well as many other major charts.

When the group was invited to “Jung Eun Ji’s Radio Plaza” on November 6, they talked with their label mate Jung Eun Ji of Apink about the moment they first charted and more. Jung Eun Ji pointed out that it is their highest ranking since debut, and she also mentioned how it’s particularly difficult to chart lately as competition is so fierce.

When asked how they feel about entering the charts, Choi Byung Chan said, “I looked right at 7 p.m. I didn’t see our song so I figured we’d unfortunately not made it in. But then I suddenly heard a voice quietly saying, ‘It’s No. 51.’ I checked and it was No. 51, so I screamed in the dressing room, ‘It’s No. 51!’ Everyone was shocked and just kept saying ‘It’s No. 51!'”

Choi Byung Chan mentioned that later on in the evening, all their new songs entered the Melon Top 100 chart and their title track ranked in the 30s. “I think for us it was an unforgettable gift and memory,” he said.

Jung Eun Ji shared that some of the members had cried, and she told them, “You all worked so hard.” 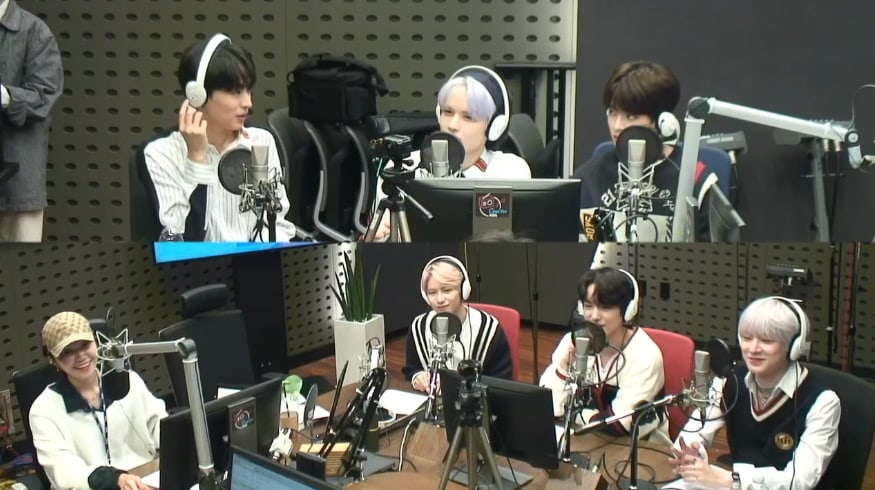 She went on to ask Chan about how he’d ended up co-composing their title track. Chan shared that he hadn’t been part of the composition process when “Nostalgic Night” was in its first draft, but he joined as a co-composer when the song was being reworked for six members. He said, “To be honest, there was a lot of pressure in the beginning since it was our first title track in a year and a half, and I was a bit unsure about whether it was right. But it’s received a lot of love, so it’s great.”

VICTON also talked about their b-sides on the album. While introducing the song “Farewell,” Chan said, “This is a song that we really wanted our fans to listen to during our hiatus. It has a lot of meaning, so we hope you’ll love it.”

The lyrics for the track “Here I Am” were written by Seungsik and Hanse. “It’s a song with comforting words that we and our fans ALICE can say to each other,” Seungsik explained. “It has the meaning that no matter what happens, ‘I’ll be here.'”

Jung Eun Ji asked Seungsik what scene he imagined in his head as he worked on the lyrics, and Seungsik said that he’d thought about how their fans had staged an event for them at their recent fan meeting. “When I thought about that event, the lyrics came out easily,” he said.