Park Hee Seok, a contestant on Mnet’s “Produce 101 Season 2,” has shared his thoughts regarding the controversy about the series being under suspicions of vote manipulation.

On November 5, PD Ahn Joon Young was arrested on suspicions such as fraud and breach of trust by taking bribery. During his police questioning, Ahn Joon Young is reported to have admitted to manipulating the results of the most recent two seasons “Produce X 101” in 2019 and “Produce 48” in 2018. He reportedly denied manipulation of the first two seasons of the series.

On November 7, Park Hee Seok took to his Instagram and shared a screenshot of a news article about PD Ahn Joon Young admitting to manipulating the results after receiving favors from certain agencies. Along with the photo, Park Hee Seok wrote a lengthy caption in which he shared his thoughts regarding the controversy.

The following is the statement from Park Hee Seok:

I dare say this as someone who directly participated in the program and watched seasons 1, 2, and 3 because they were filmed at our agency’s practice rooms at the Paju Hallyu Training Center, but I do not believe there was a single trainee who did not work hard or wasted time when they were filming, did not give their best for each performance, or believed that they would obviously get the spot.

People from small agencies that do not have the money nor connections could not comfortably sleep nor rest, and they spent time smiling, crying, fighting, and getting exhausted and frustrated, hoping to achieve their dreams by appearing in the program. They considered each performance as their last and because of the little shred of hope, they got nervous for each voting, cried because of malicious comments, and smiled for even a second of screen time.

Even I, who is complimented for my positive and strong state of mind, had a hard time reading comments such as ‘This is the end for you’ or ‘How can someone like you wish to be an idol?’ You cannot even imagine how hard it must have been for the trainees who are timid and had no one to open up to. Every staff member, writer, and producer worked just as hard while filming the program. 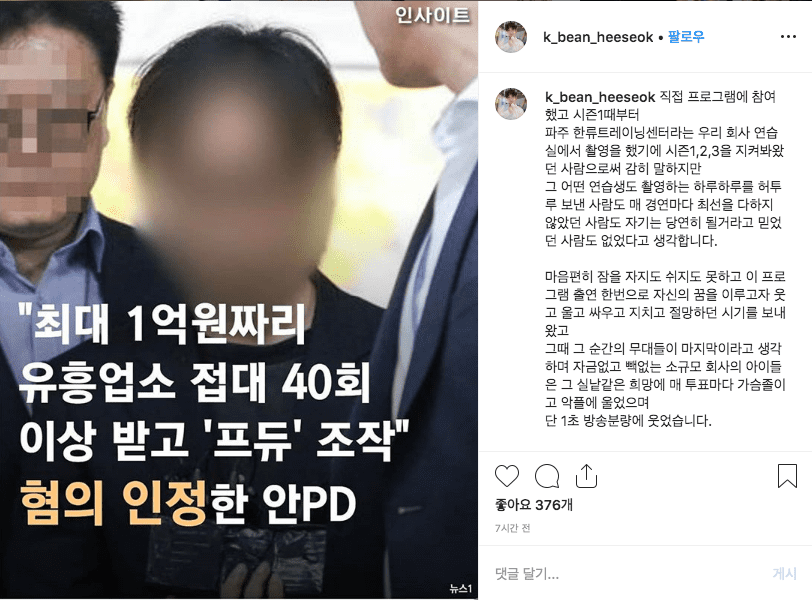 Produce 101 Season 2
Park Hee Seok
How does this article make you feel?