TXT made their first appearance on JTBC’s “Idol Room”!

On the November 12 episode, the rookie boy group opened the show with their debut title track “Crown.”

MC Jung Hyung Don began, “Who are you guys? It’s my first time seeing you,” and TXT introduced themselves using their bodies. The MCs asked, “Are you guys the younger siblings of the globally-successful BTS?” and MC Defconn commented, “Yeonjun has V‘s vibes.” Jung Hyung Don added, “I can’t speak thoughtlessly about BTS. I used to treat them comfortably in the past.”

The members then began competing for a spot on “Idol 999,” a fictitious survival show on “Idol Room.” TXT’s leader Soobin was introduced as “a magical body” who is full of charms from head-to-toe. He revealed that he has four dimples and surprised everyone with his elastic skin and flexible arms.

About being the leader despite not being the oldest member, Soobin shyly said, “I think it’s because I’m of the median age and [members] can comfortably approach me.” Taehyun explained, “I stated that I didn’t want to be the leader. I could make a good team, but I didn’t think the members would be happy.” 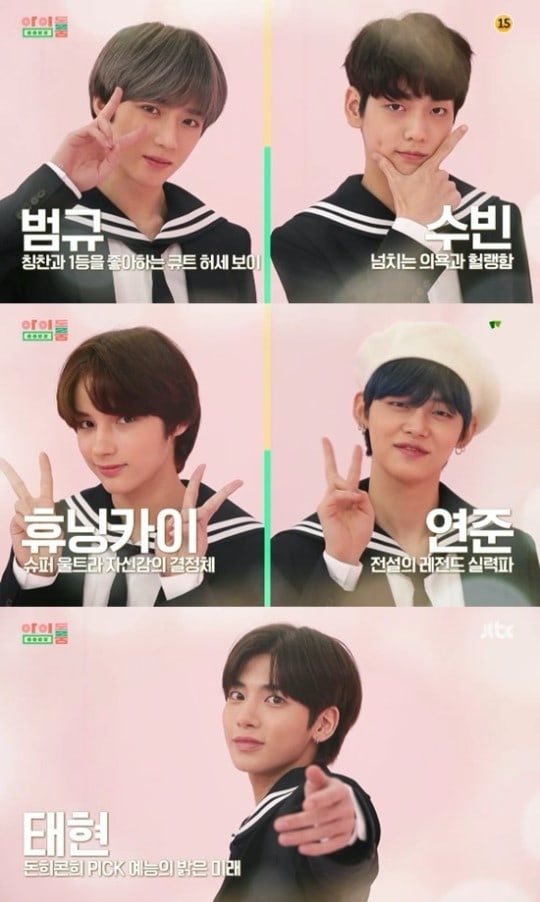 Yeonjun was introduced as “Big Hit’s legendary trainee” who achieved No. 1 rankings in dance, vocal, and rap during his trainee years. All of the TXT members praised Yeonjun’s skills, and he wowed everyone with his rap and fast spins.

Beomkyu stated that he was from Daegu and spoke in satoori (regional dialect). Jung Hyung Don commented, “It’s mixed with the Seoul dialect.” The TXT member replied, “My satoori is good when I talk on the phone with my mom” and carried on a conversation with the MC.

After being described as a BTS fan, Beomkyu showed off his imitation of V that captured the BTS member’s unique eye gestures and hand motions. He explained, “During my trainee years, I had lots of ambition about my facial expressions, so I studied V’s facial expressions a lot. I practiced everything from his eyebrow to jaw movements.” When asked why he likes V so much, Beomkyu replied, “He looks so cool on stage.” TXT added, “We dreamt of becoming idols when we were in school by watching BTS.”

As for what kind of senior BTS is to TXT, Yeonjun said, “[Jungkook] wrote ‘Good luck’ on a post-it during our U.S. showcase. We have it in our practice room.” Soobin added, “Jin said that he wanted to eat with us. He ordered pizza, gave it to us, then left.” TXT then revealed their dance cover to BTS’s “Boy in Luv” and “Dope.”

Taehyun was introduced as a budding magician. “I’ve been doing magic for about two years, and my specialty is card magic,” he said. He amazed everyone with his card magic skills, and Defconn commented, “It’s not just okay magic. He’s really good.” Taehyun added that he used to be a boxer and showed off his skills that earned him second place in the National Sports Festival. 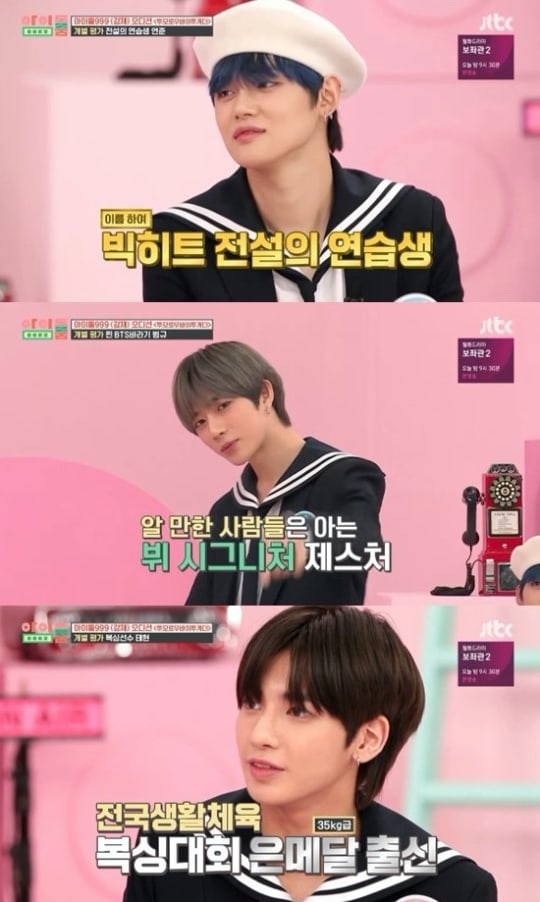 Huening Kai was introduced as a genius at playing instruments and proved his skills by playing the piano. Beomkyu then joined him with his guitar, followed by Soobin with his recorder.

TXT performed their newest title track “Run Away” and received an “A” for their amazing teamwork. In the end, Taehyun was selected as the newest member of “Idol 999.”

Check out TXT’s dance cover medley of BTS’s “Boy in Luv” and “Dope” below:

BTS
Idol Room
TXT
How does this article make you feel?