DAWN Shares What He And HyunA Would Do With Their Photos Online If They Broke Up, How They Act In Front Of Parents, And More

DAWN appeared on MBC’s “Radio Star” on November 13 and shared some insights into his relationship with HyunA!

This was DAWN’s first time on a variety show on his own, and he shared that HyunA had told him to be careful about what he said. When Kim Gura suggested that he just talk honestly, DAWN said, “I’m not good at lying.”

DAWN and HyunA both released their new singles on November 5 and held a comeback showcase together as good-natured rivals. DAWN said, “I was much lower in the rankings, but we didn’t focus on the rankings, and it was just a good-natured competition. We did it because it seemed like it would be a good motivation.”

DAWN went on to say, “HyunA said that she was the first one to confess and say that we should date, but it was me. When I was a trainee, there was a time when I helped her for a performance. We met for the first time then, and HyunA says that she started liking me then.”

When asked if he’d felt an interest for her too, DAWN replied, “To be honest, I didn’t.” Kim Gura said that was natural since she was huge star, and DAWN confirmed that was the reason.

DAWN also shared a story about what their dating life is like. He said that HyunA is the scariest when she gets mad and calls him by his real name. “I don’t get mad much myself,” he said. “I always apologize first. If I’m angry, then once HyunA has her back turned, I’ll swear at her back so that she doesn’t hear.”

DAWN spoke about how he went through a difficult time after they revealed that they are dating. “I tend to be really optimistic,” he said. “Even if I fight with HyunA, by the time I turn around I’ve forgotten about it. I’m not even that affected by malicious comments. But at that time, the people that were everything to me turned their backs on me, so it was hard then. I felt like I’d lost everything, and I was worried about even going outside in case someone recognized me.” 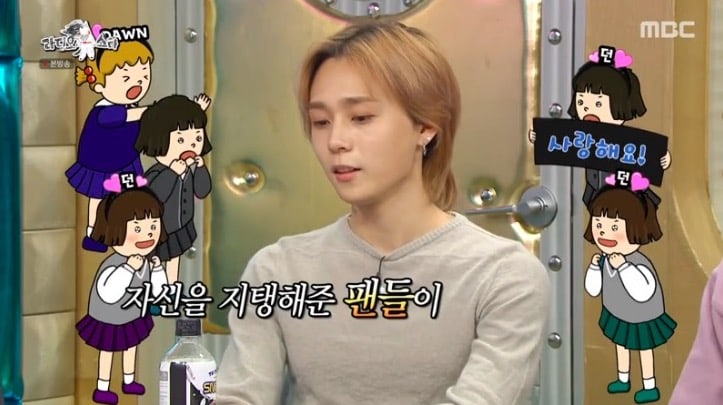 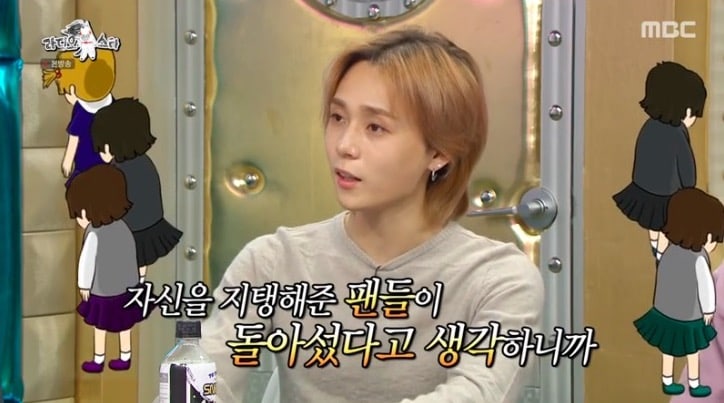 He shared that he’d managed to get over that feeling after starting to use social media for his fans. “There were a lot of fans there who were supporting me,” he said.

He later said that he wanted to clear up a misunderstanding that’s been caused by their social media posts. He said that many people seem to misunderstand and think that HyunA likes him more than he likes her because she’s often uploading pictures of them together and expressing her affection for him. He explained that he doesn’t do it much because he feels awkward uploading photos like that himself. He clarified, “I think I like her more.”

DAWN was asked if he’s ever thought about a potential break-up with HyunA. “I’ve talked about it with HyunA,” he replied. “People around us have said to us, ‘If you break up after you’ve dated publicly, all of your posts will still be there. What are you going to do?'”

DAWN explained, “HyunA said, ‘Let’s not delete our photos, even if we break up.’ It’s natural for young people to date and then break up, and it’s possible that we could date again. It would remain as a good memory, so I think that things like deleting all of our photos aren’t really our style.”

He also surprised the hosts when he shared how he and HyunA confidently show their affection for each other in front of his parents. DAWN said, “I’ve always liked showing affection, ever since I was young. I was like that with my parents too without any hesitation.”

He shared, “The most recent time my parents came to visit me, HyunA lived close by too so we all met together,” he said. “I naturally showed my affection for HyunA in front of my parents too. My parents didn’t mind at all. But HyunA —” The hosts joked that she must have been shocked and tried to shy away when he did that, and he laughed and said it was a bit like that. The hosts asked if they’d held hands, hugged, and gave kisses on the cheek, and he said they had. 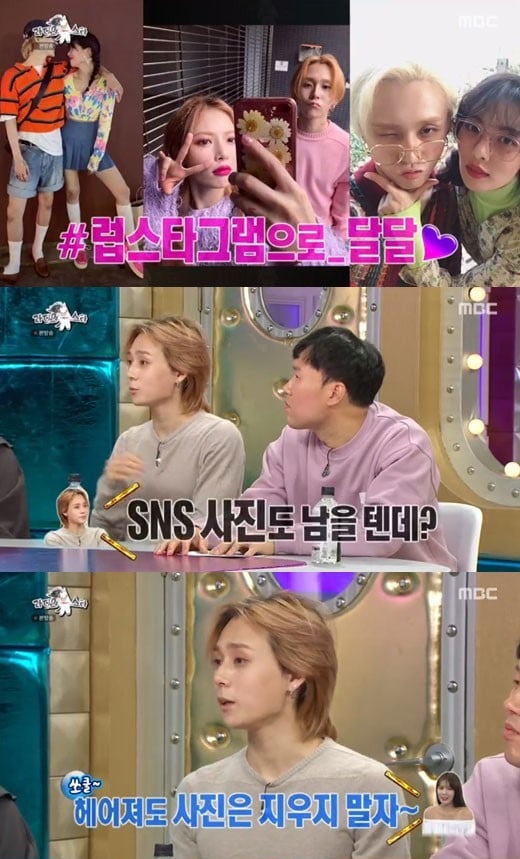 Dawn
HyunA
Radio Star
How does this article make you feel?