Apink’s Jung Eun Ji and IU showcased their friendship in an unexpected way!

On November 22, Jung Eun Ji held a live broadcast on Instagram in which she sang songs for her fans and chatted with them. One of the songs she sang was IU’s “Dear Name,” and IU surprised the Apink member by personally appearing in the chat during the broadcast. The two singers are known to be good friends and have spoken about their friendship in the past.

Jung Eun Ji exclaimed with a laugh, “[IU] came! Hello, sunbae. This is so embarrassing.” She then declared, “Since [IU]’s here, I should put on a concert of [IU’s] songs.”

The Apink member went on to cover IU’s “Ending Scene,” and IU commented, “I always thought that this song was a piercingly sad song, but it sounds warm when you sing it. It’s amazing.” When Jung Eun Ji introduced the song as “‘Ending Scene’ by IU,” IU jokingly added, “Hey! I’m your sunbae [senior]! Got it?” 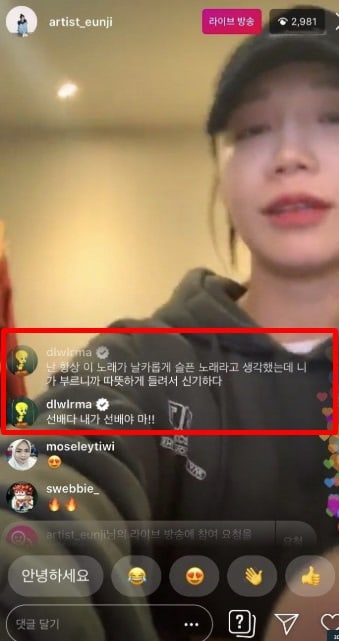 Later on, Jung Eun Ji sang IU’s “Through the Night,” and IU played off the lyrics by writing in the comments, “Unnie, the fireflies won’t be able to fly because they’ll be busy listening to your voice,” which she followed up with “Unnie, I don’t think the waves will be able to leave after hearing your voice.”

Jung Eun Ji replied to IU’s comments by joking that she wanted to screenshot her praise, adding with a laugh, “She’s really good at writing fangirl comments!” 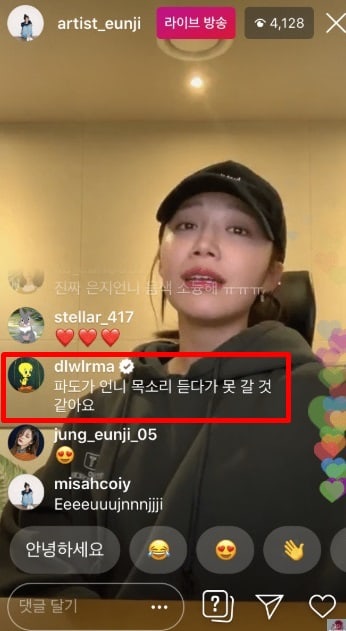 Apink
IU
Jung Eun Ji
How does this article make you feel?