Jisook spoke about her relationship on “Radio Star”!

On the November 27 episode, the former Rainbow member made her first TV appearance since publicly announcing her relationship with programmer and businessman Lee Doo Hee.

“This was the first time dating news was reported about me after my debut,” Jisook began. “I didn’t know what the fans would think. I didn’t know how much I needed to talk about, so I decided on a section [after discussing it with my boyfriend].”

She added, “Marriage reports came out after the dating confirmation, but they weren’t true. But the articles made the denial sound so strong that I thought I might not be able to get married at this rate, even though we had discussed marriage.” 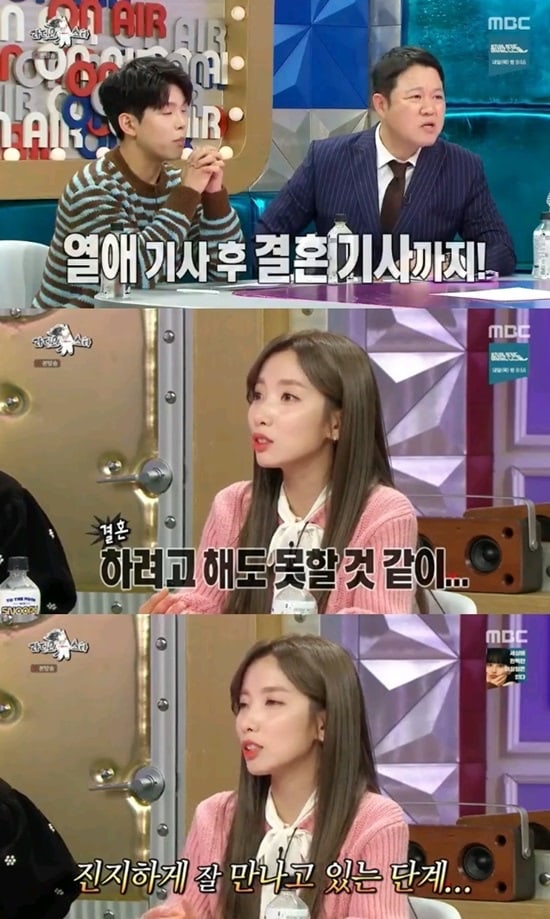 Sharing their love story, Jisook said, “When I was feeling stressed about malicious comments, I was introduced to a skilled hacker who was good at catching malicious commenters. That’s how we first met. I thought that he would be dressed comfortably in a hoodie, but he didn’t look like the engineering student I had imagined. He showed up dressed up like ‘Kingsman.'”

She continued, “Instead of catching malicious commenters as a hacker, he said that he came out to catch me. He already knew about me and wanted to be introduced to me. He couldn’t catch the malicious commenter himself. I thought that he wasn’t skilled and my first impression of him wasn’t that good.”

When asked how they began dating, Jisook explained, “He looks really cool when he’s using the computer and coding. He codes on a black screen and his fingers looked so cool and beautiful. I think that people who are good with machines are charming, and he suddenly looked different. I still ask him to work in front of me.”

Radio Star
Rainbow
Jisook
How does this article make you feel?